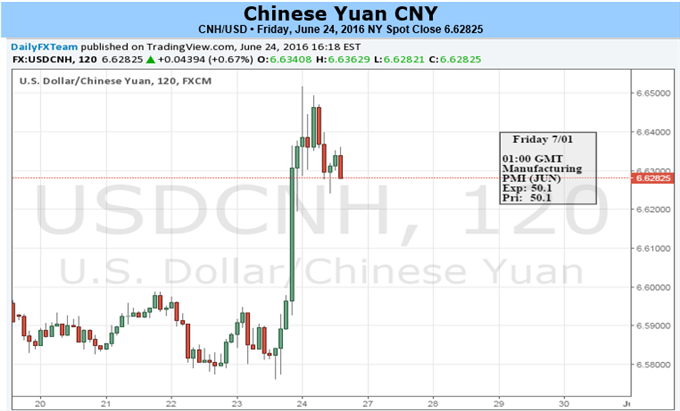 As of 9:30 am EDT, the onshore Yuan against the British Pound (GBP/CNY) soared +8.11% to 9.0738 while the offshore Yuan (GBP/CNH) rose +7.68% to 9.0934, following Britain’s vote to depart from the EU. The onshore Yuan (USD/CNY) slumped against the US Dollar by -0.70% to 6.6384, the lowest level since January 2011. The offshore Yuan (USD/CNH) slid by -0.81% to 6.6370, the biggest move in five months. Ahead of the release of the vote results, the PBOC fixed the onshore Pound/Yuan rate 1343 pips lower to 9.5899 and weakened the onshore Dollar/Yuan rate by 118 pips to 6.5776 per dollar. There are still considerable differences between the daily fixings and current trading prices; which means that on Monday the Central Bank will likely continue to guide onshore Yuan rates towards the market moves. In order to keep the Yuan stable relative to a basket of currencies, the PBOC has incentive to guide the Yuan lower against the US Dollar. As a safe-haven asset, the Dollar itself is expected to rise against other currencies, including the Chinese Yuan. Thus, with both the internal incentive and external drivers, the Yuan rate against the Dollar is likely heading into a downtrend. Coupled with the heavy volatility in the other basket of currencies, traders will want to be cautious when trading Dollar/Yuan pairs over the weekend and into next week.

The PBOC’s target is to keep the Yuan reasonably stable to a basket of currencies, which includes the British Pound. With such a huge plunge in the Sterling, the Yuan is expected to drop against another major counterpart, the US Dollar, in the effort of balancing the basket. The Yuan rates, both offshore (CNH) and onshore (CNY), are determined by two factors: The PBOC’s guidance and market moves. Depreciation in the Sterling will directly affect the PBOC’s guidance, which is the so-called daily fixing. After China’s Central Bank de-pegged the Yuan against the US Dollar in August 2015, they referred the Chinese currency to a basket of currencies that includes the Pound with the goal of keeping the Yuan stable relative to the basket. On June 24th, China’s Central Bank issued a statement regarding the Brexit decision: It said that “the Central Bank has closely watched the progress of Brexit and made plans to cope with the result. China will continue to adopt prudent monetary policy, use multiple tools to provide sufficient liquidity and maintain the financial stability of the Chinese market. In terms of Yuan rates, they will continue to improve the exchange rate regime to be more market driven and keep the currency stable at a reasonable level.”

The PBOC issues three Yuan indexes in relation to a basket of indexes: CFETS Yuan Index, BIS Yuan Index and SDR Yuan Index. The British Pound’s weights in the three indexes are 3.86%, 2.90% and 11.30% respectively, while the US Dollar’s weights are 26.40%, 17.80% and 41.90% respectively. Among all the three indexes, the CFETS Index is the primary measure. Take the 8.11% of Pound loss to the Yuan as an example: In order to account this loss in the currency basket, the Yuan needs to devalue to 6.72 to the US Dollar assuming that other currencies in the basket remain unchanged.

However, the PBOC’s guidance on the Dollar/Yuan pair could be more complicated after taking into account other currencies in the basket. The Euro, with a 26.40% of weight in the CFETS Yuan Index, is on a downtrend on the back of the Brexit decision. The Euro fell more than -1.89% against the Onshore Yuan on Friday and is likely to drop even further in the coming sessions. The Japanese Yen, taking up 14.68% in the CFETS Yuan Index, gained over 4.70% against the Yuan. Japanese Finance Minister Taro Aso indicated that Japan may intervene in the market in the effort of calming Yen strengths being driven by Brexit. If this happens, the Yuan Index could face even more pressure. The rest of the currencies included in the basket are HKD/CNY (6.55%), AUD/CNY (3.86%), NZD/CNY (0.65%), SGD/CNY (3.82%), CHF/CNY (1.51%), CAD/CNY (2.53%), CNY/RUB (4.36%) and CNY/THB (3.33%).

Keeping the Yuan stable to the basket does not mean unchanged. With such dramatic moves, the PBOC has to balance the impact to the Dollar/Yuan pair and the Yuan Index. It is almost inevitable that the Dollar will strengthen against the Yuan due to safe-haven demand. If the Central Bank wants to even-out the Yuan’s huge gains in the index against the Pound and Euro, the Yuan has to weaken even further against the US Dollar. Yet, this could drive capital flows out of China while China’s foreign reserves have continued to decrease. The drop to foreign reserves in May erased all of the gains from the previous two months and dropped to $3.1917 trillion, the lowest level since December 2011. Thus, in the coming week, the PBOC’s moves and global investors’ risk appetite will be the key drivers to the Dollar/Yuan pairs. Post-Brexit responses from European countries as well as Japan will add considerable volatility to the Yuan as well. Traders will want to continue to be very cautious.