The Euro has outperformed against the British Pound since the May 7 2015, when the Conservative Party won the UK general election and paved the way for EU membership referendum now looming on June 23. Sterling has lost 16 percent against its major counterparts while the single currency has shed 12.8 percent.

While “Brexit” risk was surely not the only consideration shaping price trends, it seems to account for much of the disparity. Most fundamental considerations ultimately boil down to relative monetary policy bets. The ECB has been far more dovish than the BOE over the past year, implying the Euro ought to have underperformed. 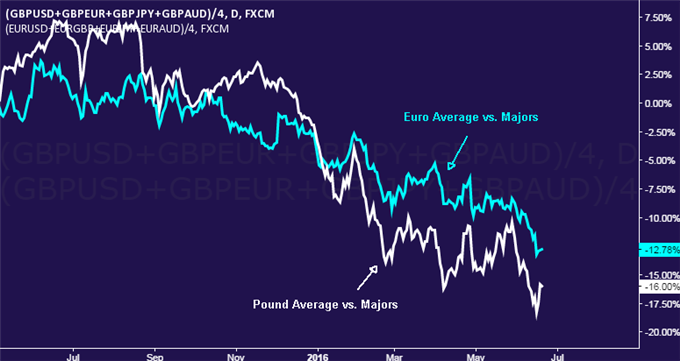 Turning to the near term, there is a dramatic gap in one-week GBP/USD and EUR/USD implied volatility readings backed out of FX options. This suggests that traders see Sterling as far more vulnerable than the single currencyon the eve of the “Brexit” vote. 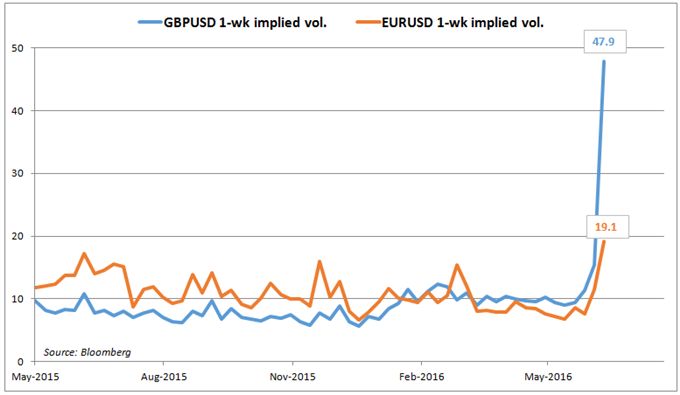 Taking it a step further, there a clear disconnect in the two currencies’ performance since the beginning of the month as UK opinion polls shifted to reflect growing support for leaving the EU. As traders priced in diminishing “Bremain” chances, the Pound dutifully declined. By contrast, the Euro has been relatively little-changed. 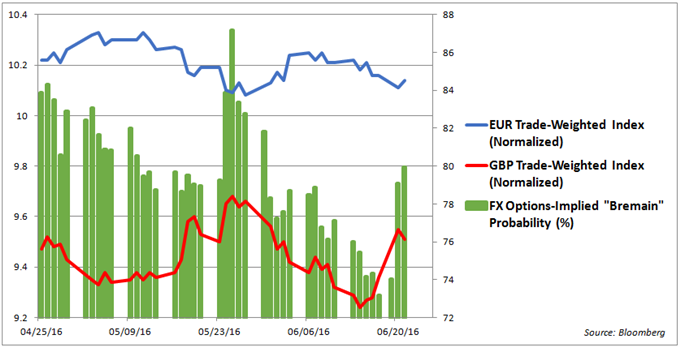 On balance, this hints that the markets are underestimating the risk that “Brexit” poses to the Eurozone and the common currency. At the surface level, the UK share of Eurozone exports has been growing since mid-2013 and now accounts for 13.4 percent of total cross-border sales. Negotiation of exit terms following a victory for the “Leave” campaign will take at least two years. Uncertainly in the interim is likely to hurt trade across the English Channel, denting growth on both sides.

Looking deeper, the knock-on effects may be far more ominous. Relaxing trade barriers, harmonizing regulations as well as freeing the cross-border flow of goods, capital and labor are meant to reduce the cost of doing business, benefitting all involved. If some states greatly outperform however, they also make it easier to abandon pockets of weakness and flock to strength at the most inopportune time.

The 2008-09 global financial crisis and recession has exposed deep prosperity imbalances within the Eurozone. Voices of discontent in struggling countries rail against the imposition of austerity while their richer peers bemoan costly bailouts and unfettered migration with equal vigor. Such views underpin the case for “Brexit” and inspire parallel support for otherwise opposing political forces such as Spain’s Podemos and France’s FN parties.

If the so-called “Brexiteers” succeed, this may embolden eurosceptic forces elsewhere. Spain will hold a general election just days after the UK vote. Podemos is polling second after the ruling PP party and may emerge as king-maker in coalition negotiations. France is due for presidential elections in 2017 amid growing support for the FN, which wants to hold a referendum on the UK model. Investors may yet flee from the Euro en-masse if “Brexit” is seen as establishing a precedent boosting these and similar outfits.