This article is the first in a six article series on risks when trading extremely volatile market conditions. See the end of this article for links to other parts in the series.

Most people correctly think of FX as a 24 hour 5 day per week continuous market. However, there is a 48 hour period, namely Friday afternoon to Sunday afternoon, where trading doesn’t take. This is because the large market making banks go offline for the weekend cutting down on the liquidity available to the retail trader.

An important reminder for traders is that the market is still moving even while trading is not available to the retail client. For example, a news event may take place on a weekend that can push prices significantly in one direction. The market is constantly moving even though a retail trader’s access to that market may be limited at certain times.

As a result, there is a risk that prices gap and move quickly. This most frequently happens over the weekend and during news events. However, it can happen anytime.

Therefore, one ofthe best ways to manage the risk is to avoid the exposure. If you are avoiding weekend exposure, that means closing down trades prior to the end of the week and re-opening them on Sunday, if desired. If you are avoiding exposure during news events, then close down trades prior to the news release and re-open them afterwards, if desired.

Though weekend price gaps tend to be small and manageable (many times less than 25 pips), there are times when the gaps can be quite large opening the door for losses that are greater than the deposited funds. For example, we studied the FX price gaps from June 2013 to April 2016 and found 12 weekends where gaps of 100 pips or larger occurred in the more commonly traded FX pairs. There were 148 weekends studied so this represents 8% of the weekends.

Keep in mind that the 2013-2016 study dates were during a time of relative calm in FX volatility. Check out the CVIX chart again in Image 1 above. Notice how the highlighted volatility period was nowhere near the volatile levels witnessed in 2008 and 2009. Therefore, if extremely volatile conditions kick up again, look for the frequency of weekend gaps of over 100 pips to increase.

We also found during the study that gaps tended to be larger on cross pairs than on the majors. You’ll see on the graphic below that the majors were running about 9-11% of the weekends with a gap greater than 25 pips. That percentage increased to about 14-20% for the JPY crosses. Then, notice how for cross pairs the percentage grew even more to 34-45% of the weekends with a gap greater than 25 pips. If you trade cross pairs or exotic currencies, the propensity for gaps and potentially large ones may increase when trading resumes on Sunday. Avoid weekend exposure in extremely volatile conditions as the risk can become unlimited. 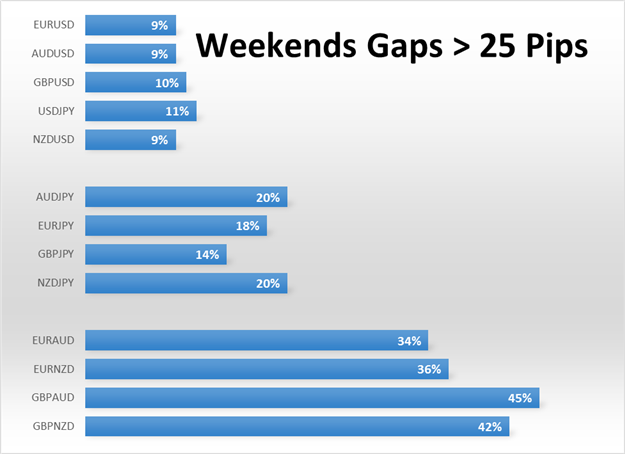 Additionally, there have seen several recent instances of event risk taking place over the weekend. It is important to recognize that weekend gaps do not always correlate with the anticipated event risk. For example, the Scottish independence referendum vote was held on September 18, 2014 which was a Thursday. It was 2 weeks prior to the vote, the weekend of August 31, where Sterling saw a large gap down on the open. Both GBP/USD and GBP/JPY gapped down on the open by more than 100 pips. 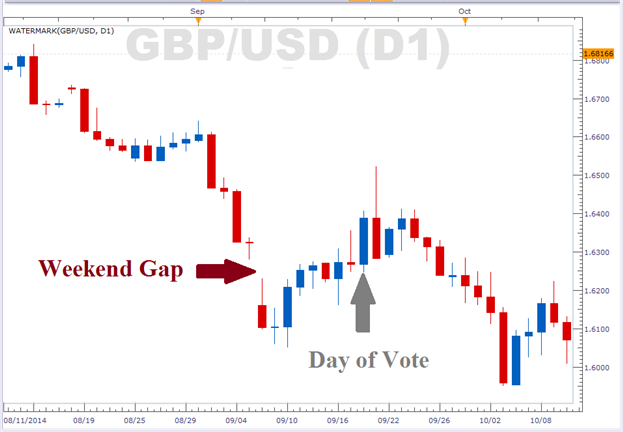 Lastly, price gaps are not specific to FX. They happen frequently in CFDs as well. The pricing and liquidity in FX tends to be more fluid and yet we still see large gaps noted above. When addressing CFDs, certain instruments see infrequent price updates and are more prone to price gaps when the new price updates in the market.

Bottom line, price gaps occur more frequently in the crosses and exotic pairs than in the majors. However, the majors are not immune to large price gaps either. In extremely volatile market conditions where volatility is high, we can expect price gaps in the majors, crosses, and exotics to be more frequent and possibly larger in size. Also, large weekend price gaps does not necessarily correlate to anticipated weekend event risk. Lastly, CFDs can see large gaps as well. Especially in the less liquid markets.

Therefore, one of the best ways to manage the risk is to avoid weekend exposure. That means close down trades prior to the end of the week and re-open them on Sunday, if desired.

Remember that trading on margin can result in losses that could exceed your deposited funds and therefore may not be suitable for everyone, so please ensure that you fully understand the high level of risk involved.

This article is part 1 of a 6 article series on risks during extremely volatile market environments. Continue on and read part 2 on liquidity.