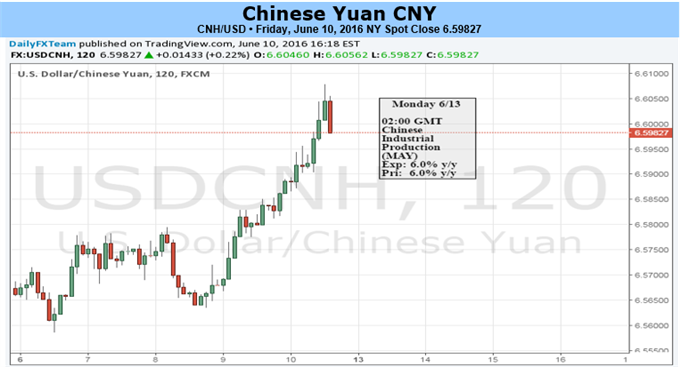 • What Are the Traits of Successful Traders?

The offshore Yuan rate (USD/CNH) and the onshore Yuan rate (USD/CNY) moved in opposite directions this week. The offshore rate dropped on Monday following a weaker-than-expected daily fix set by the PBOC, while the onshore rate strengthened. The offshore Yuan extended losses against the Dollar on Thursday and Friday when the onshore market closed for a three-day national holiday, and thus no fixings were released. Upon the open next week, the risk in capital flows out of Chinese equity markets as well as the country at-large has significantly increased. Also, major themes including the Federal Reserve’s June meeting and MSCI’s decision on Chinese A-shares inclusion are expected to bring elevated volatility to the Chinese currency.

China’s May trade numbers released the past week not only revealed disappointing exports, but also raised concerns around surging capital outflows through over-invoicing. Mainland China’s imports from Hong Kong hit $2.48 billion in May, increasing by +242.6% from a year ago. In fact, over the past six months, the mainland’s imports from Hong Kong have already seen significant increases. The year-over-year growth in imports jumped from +64.5% in December 2015 to +203.5% in April 2016. However, according to Hong Kong’s official data, the region’s exports to mainland dropped -5.8% on average over the same period. This discrepancy indicates that Chinese importers may have paid higher prices than the actual value of the imported goods or services, which is called over-invoicing. China’s foreign reserves dropped by $27.93 billion to $3.19174 trillion in May, the lowest since December 2011. The continued pressure of capital outflows may drag the Yuan lower.

The risk in Chinese equity markets has also been increasing: ’Big’ Chinese shareholders have significantly cut holdings over the past 6 trading days, which may lead to a broader selloff after the market reopens on June 13th. This market sentiment could drive capitals flows out of the country again, as was seen in January, and this could hurt Yuan rates. Also of note, MSCI will make the decision on whether to include Chinese A-shares in its emerging market index on June 14, which is highly likely to bring elevated volatility to the Chinese equity markets. There were mixed messages over the past week that may affect the odds of the inclusion: On one hand, China issued 250 billion yuan of RQFII quota to US institutional investors. This provides channels for foreign investors to purchase Chinese stocks and thus is a positive move. On the other hand, the ‘calming down’ commentary published on the newspaper administrated by the PBOC and the cancelation of the MSCI press conference on decision day dampened the outlook for inclusion.

If the answer from MSCI is yes, it may not necessarily drive the Chinese stock prices higher in the short-term. Empirical studies have shown that after MSCI included stocks from Taiwan and Korea, the stock prices in the two regions showed limited increases; instead, the correlation between the two markets and the global trends were highly improved. This could be the case for China as well. However, if MSCI rejects China’s application, the impact could be very bad. Chinese equities are lacking of momentum amid the L-shaped economic growth and the nation-wide production cut. Since May, MSCI inclusion has become a major theme to support Chinese stocks, although the Shanghai Composite Index has yet to break the key resistance level of 2,940. Without the prospect of MSCI inclusion, the Shanghai Composite is likely to drop below 2,800; the major support level since May. Yuan rates, especially the less-controlled offshore rate, may plunge as a consequence.

Last but not least, the Federal Reserve’s next policy meeting will be held next week. As the Chinese currency become more market-driven, China’s most important counterpart, the US, has contributed to some of the largest moves to the Yuan pairs, such as the recent bout of Dollar weakness being driven by a disappointing non-farm payrolls print. Although the June rate hike is less likely, any clue that hints a July rate hike could largely affect the Dollar pairs, including the Dollar-Yuan. Other key US data, such as the May Industrial Production and the Jobless Claims, could affect the Dollar-Yuan pairs as well. China’s domestic Industrial Production and Retail Sales gauges may have limited impact on Yuan pairs unless we see a significant miss, as it has already been well-known that China’s manufacturing industries would have to take a quite long time (at least two years) to recover.