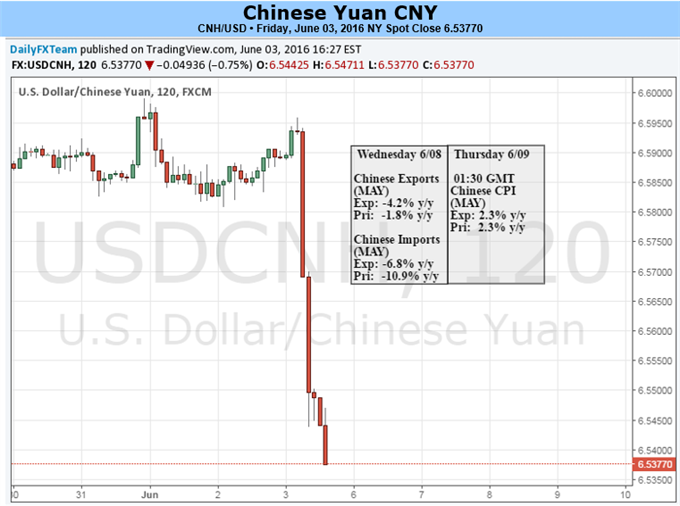 The onshore Yuan pairing (USD/CNY) touched 6.5934 on Wednesday, the first time since the plunges in January. This was mainly led by the PBOC, which set the daily fix its weakest level since February 2011 at 6.5889 on the day. The offshore rate (USD/CNH) hit 6.5991 following the PBOC’s move; and both Yuan rates extended losses on Thursday while correcting on Friday after a weak US jobs report. The Yuan’s plunge this week was driven by an entirely different reason from what we saw in January: The PBOC devalued the currency this time in the effort of preparing against the risk of a rate hike from the Fed in June. The market’s reaction was considerably different as well as Chinese stocks remained relative stable. In fact, foreign capital inflows saw significant increases over the past six days led by the growing expectation of MSCI inclusion. In the coming week, MSCI inclusion will continue to be a major theme for Chinese financial markets. Also, the Secretary of the US Treasury will attend the annual China-U.S. Strategic and Economic Dialogue meetings from June 5th to 7th. China’s foreign exchange rate regime will be one of the most important topics at these meetings.

The PBOC has been actively preparing the Yuan ahead of Fed rate hike, not just during the past week but during the entire month of May. This has two purposes: A) to reduce the shock of impact (if Fed raises rates) and B) to train market participants to tolerate higher volatility in a global environment. Before March, a 200-pip move in the daily fix was rare. Yet, over the past few weeks, we’ve can see such moves at least once a week. A more market-based Yuan rate does not only require continued government reforms but also qualified participants. Chinese investors, including many institutional investors were used to protection from the Central Bank. As China takes on a larger role in the global economy, this type of protection is likely to change. The key level for the Yuan is at 6.6000; and should this level become eclipsed, that could bring additional pressure to Chinese markets.

Another pertinent theme for Chinese markets in the coming weeks is A-shares’ MSCI inclusion. In order to increase the odds of MSCI inclusion, China’s two stock exchanges issued new rules restricting trading halts on May 27 which removes a major obstacle from inclusion in the global Index. Goldman Sachs increased the probability of acceptance to 70% from 60% on Tuesday. In the coming week, the Chinese government may take even more actions to boost these odds, such as launching additional capital flow channel, the Shenzhen-Hong Kong Stock Connect. A positive decision itself is expected to attract a significant amount of overseas funds into China. More importantly, China’s moves to increase the probability of inclusion could encourage funds to flow into China before the decision. This increased capital inflow could remove a considerable amount of pressure from Yuan rates. This does not ensure of appreciation in Yuan spot rates, as the PBOC may continue to guide the currency to move in both directions as they did on Thursday/Friday of this week.

Next week, top US and Chinese officials will meet in Beijing and exchange opinions on China’s exchange rate regime, as well as central banks’ communication to the public for foreign exchange policies. “The US Treasury will press China to move forward with a market-determined exchange rate”, said by a senior US Treasure official on Wednesday. During the meeting, the PBOC is less likely to make extreme one-side moves to the currency. Yuan rates are likely to float in both directions over the next week. Also, the two parties may issue announcements regarding China’s foreign exchange rate regime after the meeting, and this is certainly worth keeping a close eye on.