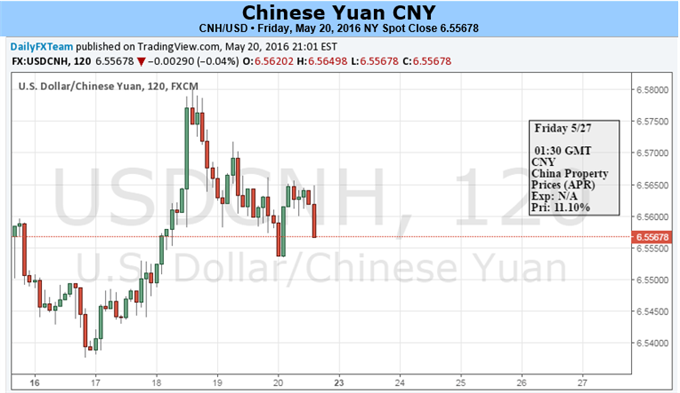 Both the onshore Yuan (CNY) and offshore Yuan (CNH) traded lower against the US Dollar this week due to the increased expectations of a Fed rate hike in June after FOMC April minutes were released on Wednesday. However, the two rates moved in opposite directions in the days that Minutes release. The offshore Yuan corrected higher on Thursday while the onshore Yuan extended losses, being guided by the PBOC, which fixed the daily Yuan reference rate 315 pips weaker on the day. In the coming week, moves by both the PBOC and the Fed will continue to be the two key drivers for the Chinese Yuan. Chinese commodity and equity markets are likely to add volatility to the currency as well.

Commentary from Federal Reserve members have significantly moved Yuan rates over the past few weeks and this is likely to continue. The offshore Yuan lost 263 pips against the US Dollar this past Wednesday after after the release of the April meeting Minutes. Three weeks earlier, Yellen’s dovish comments moved the offshore Yuan 267 pips higher on the day. The mechanism of the onshore Yuan is slightly different: The Fed’s moves will first affect the daily fix set by China’s Central Bank and then the onshore Yuan rate (CNY) which is allowed to float within 2% up or down around the fix. The PBOC has allowed the fix to move in accordance with the Fed’s impacts. For instance, the fix was set 315 pips weaker following increasing Fed rate expectations and 219 pips stronger following Chair Yellen’s dovish comments. Looking forward, three voting members of the FOMC, Bullard, Powell and Yellen, will give speeches on Thursday and Friday. FOMC alternate members, Harker, Kashkari and Kaplan, will talk on Monday and Wednesday. Fed members’ opinions, especially the voting members’ opinions on the June rate hike, is highly likely to be a big driver of Yuan rates. In addition, the US first quarter GDP report will be released on Friday. A better-than-expected GDP gauge could also increase the odds of a Fed hike in June, and in-turn, decrease the Yuan rate against the US Dollar.

The PBOC, on the other hand, is keeping an eye on the Chinese currency. The Central Bank has two benchmarks for Yuan rates: the US Dollar and a basket of currencies. Over the past two months, Yuan rates either saw devaluation against the US Dollar or a basket of currencies but not both at the same time. From the regulator’s point of view, the Yuan’s sharp devaluation is dangerous as it can create panic in the market and drive capital out of China. Thus, the PBOC would prefer the Yuan to be stable to at least to one benchmark. At the same time, China’s economy is slowing down and the recovery will likely remain L-shaped for at least two years. When the US Dollar weakens, the Central Bank allows the Yuan to advance against USD while still trying to keep it weak against a basket of currencies. This is consistent with China’s fundamentals and also removes pressure from Chinese exports. The PBOC’s two-benchmark regime is likely to continue for the foreseeable future. Thus, traders will want to keep watching PBOC’s daily fix as well as CFETS Yuan Index.

Last but not least, China’s domestic financial markets may bring volatility to Yuan rates: As discussed last week, Chinese commodity markets have been on a roller-coaster ride. Black commodities rebounded on Tuesday with coking coal and coke jumping over 5% and then on Wednesday major black commodities fell around 1%. At Friday’s close, coking coal and coke went up over 2.5% again. The risk is that in this less-mature market, the roller-coaster ride ends up becoming a one-way dive, and this could lead to panic as well as capital rushing out of China, and this could drive the Chinese Yuan lower. In terms of equity markets, new rules on trading halts could be released as soon as next week. The news rules intend to increase the odds of China’s A-shares to be included in the MSCI Index. MSCI will announce the decision in June. If the decision is a “yes”, China’s equity market is expected to attract a significant amount of capital flowing into the country, which would be a positive impact on Yuan rates.