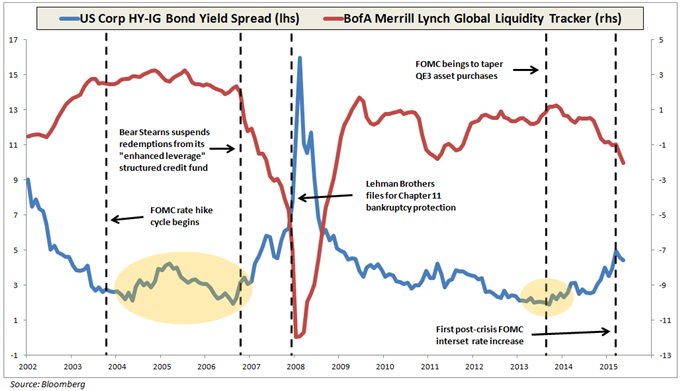 Are Financial Markets on the Eve of Another Global Crisis?

What are DailyFX analysts’ expectations for the Dollar, Equities, Gold and Oil for the Second Quarter? See our forecast to find out!

In the years following the Great Recession - the global downturn emanating from the US subprime mortgage collapse in 2007 - competing narratives trying to explain the crisis have emerged from professional and layman circles alike. A loose consensus storyline describes a chain reaction triggered by the unwinding of excessive debt levels accumulated by US households following the implosion of a speculative bubble in the real estate market.

The global financial crisis: what happened?

Initial rumblings of the subprime mortgage blow-up began in earnest in 2007. In February, Freddie Mac said it will no longer buy most subprime mortgages. By April, leading subprime lender New Century Financial Corp went bankrupt. The pain spread to Wall Street proper in June as Bear Stearns – an investment bank – suspended redemptions from an “enhanced leverage” fund betting on mortgage-linked derivatives. It spilled out beyond the US in September as the Bank of England offered liquidity support to Northern Rock, a top-five UK mortgage lender.

A flurry of firefighting efforts followed into the middle of 2008, with the Fed introducing a broad range of facilities to offer cheap lending to increasingly cash-strapped markets and facilitating the takeover of Bear Stearns by JPMorgan Chase, a large bank. The bleeding would not be stopped however. Lehman Brothers – another investment bank – filed for bankruptcy protection by mid-September. This marked an inflection point where the crisis began to appear as a truly existential threat to the global financial system as a whole.

By early October, an act of Congress birthed the Troubled Asset Relief Program (TARP) with $700 billion in firepower to backstop financial institutions. In November, the Fed began what would evolve into the first round of “quantitative easing” (QE), committing to buy $600 billion in mortgage-backed securities (MBS). In December, it set the Fed Funds rate to a range of 0-0.25 percent, hitting the zero bound for the first time. The panic began to ease in March 2009 as officials expanded support to AIG – a failing insurance giant – and the Fed grew QE by another $1.15 trillion in MBS, agency debt and long-term Treasury bonds.

Warning signs: spotting a crisis in the making

The reasons for the formation of a housing bubble specifically and the wanton accumulation of debt in the pre-crisis period generally are the subject of fierce debate. Excessively loose Federal Reserve monetary policy, misguided US government initiatives to stoke home ownership, and the reckless behavior of unscrupulous Wall Street financiers are frequent themes. Distilled down to its essence however, the crisis was born of misalignment in the perception of risk and reward in the economy at large.

Speculative bubbles arise when investors’ optimism about an asset’s performance becomes unrealistically divorced from the accompanying risks. There is no rigid rule to know when this occurs, making bubbles notoriously difficult to spot (except in retrospect). A bit of historical perspective can help however. Measuring the spread in rates on high-yield (riskier) bonds and investment-grade (safer) alternatives offers a way to gauge how much compensation is demanded for taking on a higher chance of loss. Tracking this over time helps establish signposts for peaks and troughs in risk perception.

Should we begin to worry now?

Fast forward to today and a troubling narrative emerges. The ‘high-yield versus investment-grade’ rate spread has started to widen, reflecting an increasingly cautious approach to risk-taking. That is playing out as the Federal Reserve begins to gradually pull back on crisis-era stimulus. At face value, this is precisely as it should be. Indeed, the tightening of financial conditions to prevent runaway inflation amid economic recovery is exactly the Fed’s intent. The worrisome bit is how much the spread narrowed ahead of “normalization”: namely, to levels unseen since the eve of the subprime mortgage mess.

This does not mean another catastrophe is necessarily ahead. However, it does suggest that the conditions under which irresponsible risk-taking happened before occurred again. It is possible that the draining of market liquidity will reveal as-yet unseen vulnerabilities lurking below the surface, hidden by unprecedented monetary accommodation. Might this lead to cracks in the global financial infrastructure as funding pressures mount? Will policymakers muster the firepower to fight back having barely started to rebuild their arsenal? That much remains to be seen, but investors would be prudent to proceed with caution.