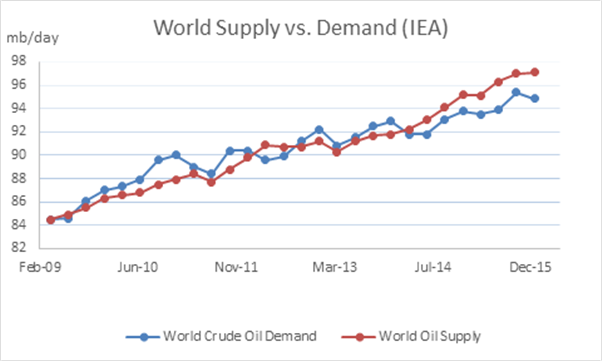 Crude oil price has stayed resilient during the past few weeks, despite occasional risk-off sentiment. Crude prices rose to their highest in three months in early March, at $42.49/barrel for WTI and $42.54/barrel for Brent. This was triggered by a combination of tightening supply, a proposed production freeze and a weaker US dollar. However, the November-December range of $44.16-$46.46 may act to cap higher development in WTI oil in the near term. Looking ahead, the April 17 Doha meeting to freeze output is a main event for the supply side, whereas demand growth from the main consumers may continue to slow down.

Global oil supplies diminished by 180,000 barrels per day in February, according to International Energy Agency’s March report, although the pace of reduction has been painfully slow. Within the OPEC group, decreased output from Iraq, Nigeria and the UAE was offset by a rise in Iran’s production after sanctions were lifted. In the U.S., shale oil producers recently halted their cuts of active rigs, according to Baker Hughes Inc. This pattern will likely continue in the foreseeable future, unless an accord to freeze output is reached at the upcoming producers gathering. Qatar has successfully arranged a meeting among OPEC members and other major oil producers to cap their production at January’s levels, in order to reduce the supply surplus. At the time of writing, Qatar’s Minister of Energy and Industry confirmed attendance by 15 countries within and outside OPEC, with the self-exclusion of Iran and Libya. If this meeting does not come to fruition, similar recommendations would likely be discussed at OPEC’s semi-annual meeting on June 2.

Supplies from major producers have built up over the years, according to statistics by the International Energy Agency (chart 2). However as low oil prices take their toll on upstream investments, plunging supply growth could eventually lead to a price recovery. 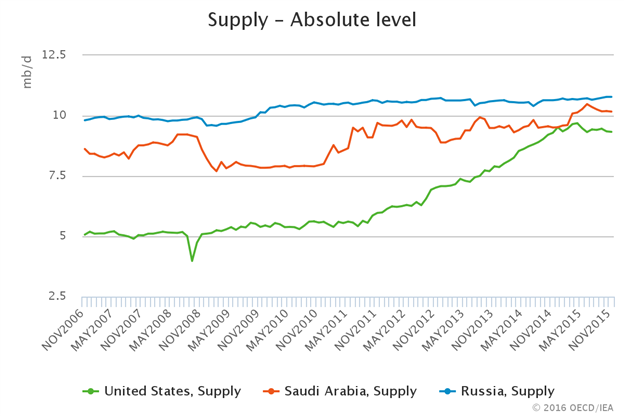 On the other hand, demand growth has also decelerated due to uncertain economic conditions, as seen in the world’s largest consumers United States and China. At the March monetary policy meeting, the U.S. Federal Open Market Committee noted that economic activity had been expanding at a moderate pace, and although strong job gains pointed to additional strengthening of the labor market, business fixed investment and net exports remained soft. U.S. Markit Manufacturing Purchasing Manager Index (PMI) hit a two-year low in December 2015 and has hardly rebounded since. In China, the February Caixin/Markit Manufacturing PMI shrank to March 2014’s level as factory activities have struggled to improve since a multi-year low gauge last September.

Technicals: Inter-market Analysis & 200-DMA are Standing in the Way of a 61% Rally in Crude Oil Extending

Crude Oil prices have had a significant turn-around since WTI Crude Oil printed 26.03 on February 11. Since that low, Oil is higher by nearly 61% or $15.91/barrel as of the late March high of $41.90/barrel. In a month, Oil bears went from looking like market masterminds to fools because of the 60%+ rise. However, there is still much uncertainty as we approach the key chart-pivot of the 200-Day Moving Average that currently comes in at ~$42/barrel. The 200-DMA is where WTI Crude Oil has turned lower in June & October and is now verified as long-term chart resistance. Additionally, the US Dollar weakness that is negatively correlated to Oil could further support of the world’s most necessary commodity. Lastly, RSI (5) on a daily chart recently hit its highest level since early 2014, which may argue we’re getting carried away as we head into technical resistance.

Confluence of Technical Resistance in Focus for Q2 2016

As we head into Q2, eyes will turn to highly correlated markets as well as key levels on the charts to see if speculators continue to build bullish exposure as per the CFTC Commitment of Traders report. As of late-March, the 52-week percentile reading of Bullish bets stands at 73% meaning that we could continue to more bullish bets build. However, given the aggressive bullish move from the low, it’s easy to say that we will either see a retracement of much of the move or, at least, a smaller (in % terms) continuation higher on the back of possibly more US Dollar weakness. As the end of Q1 has us heading into the 200-DMA, 61.8% Fibonacci Retracement Level of the October-February Range, and Price Channel Resistance, the bullish outlook will continue to be favored above 35.94-34.25. This zone is comprised of multiple chart pivots, and a hold above this level should keep traders focused on the upside. Of course, the risk remains that we could see the fundamentals of eager producers bring back oversupply to service their debt-laden balance sheets, which could see the price move back in the direction of the February low. Those fundamental factors and/ or a US Dollar bullish reemergence would favor yet another move down from the 200-DMA in WTI Crude Oil.