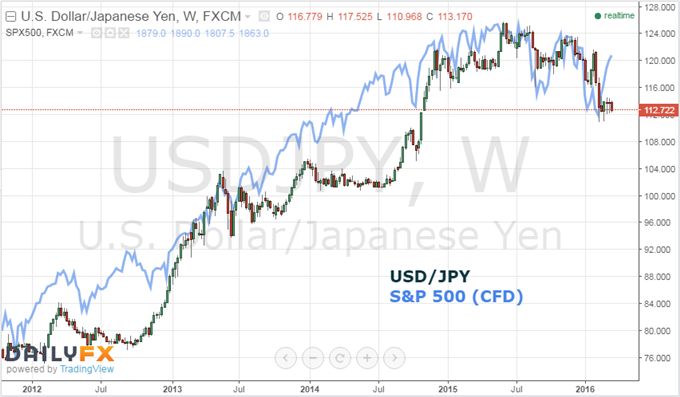 See the DailyFX Analysts' forecasts, read about their favorite 2016 trading opportunities,and learn about more beginner to advanced topics in trading on the DailyFX Trading Guides page.

The financial headlines are growing more spectacular with time and developments around the globe. Sentiment surrounding growth and investment appetite is starting to flag, and that slump claims many catalysts and victims. As we see the big picture change, the scope and depth of the shift suggests enormous investment/trading potential for the industrious market participants. However, finding market instruments to track sometimes abstract and dynamic themes can be difficult – so much so that an industry is built around it. Yet, the individual trader can find access without the costs associated with a questionable ‘derivative’ in the currency market.

We will look at some of the most prominent fundamental themes to populate the headlines these past months and look at FX equivalents that offer strong price approximations to the subjects. The big picture topics we’ll discuss are ‘risk trends’; the strength and weakness of China; the possible down leg of a commodity supercycle (particularly oil); and the aggressive applications of monetary policy.

Risk Trends a Reflection of the Entire Market

Investor sentiment – often referred to as ‘risk on and risk off’ – is perhaps the most fundamental element of the world’s markets. Sentiment dictates each individual’s decision to take a trade, exit or pass; but it is also seen in aggregate with the rise and fall of entire assets and markets. Yet as ubiquitous as sentiment may be, it isn’t particularly straightforward to find exposure to an optimistic or pessimistic view.

One of the most popular ‘trades’ for speculative appetite is an exposure to equities. As a heavily traded asset with a heavy presence of non-professionals that reflects the health of business and the broader economy, this makes sense. However, there are certainly drawbacks. This is largely a buy-and-hold asset for the majority of participants, but risk appetite doesn’t just rise. Further, shares or portfolios may not be good approximations of sentiment itself. Even indexes have their faults and certainly their costs.

For an FX representation to risk, the Yen crosses may offer greater function. Representing the currency market’s carry trade, the appeal of passive yield income versus the fear of capital position losses offers a very similar fundamental evaluation to stocks. Yet, there is no inherent long-only bias for an exchange rate. That offers a more accessible ‘short risk’ view with liquidity when sentiment reverses. Below we can see the relationship between the S&P 500 and USDJPY exchange rate.

Recently, there has been a divergence between exchange rate and equity index. While the broader trends align very well, deviations do occur. These partings of way often occur when sentiment itself is facing conflict and indecision is being forced to a definitive resolution. So, do you think the recent upswing in shares or this breakdown in USDJPY is more indicative of the trend that will be found moving forward?

Compare how retail speculators are positioning in the SPX500 versus the USDJPY to see if there is shifting current using the FXCM Speculative Sentiment Index (SSI) data on DailyFX. 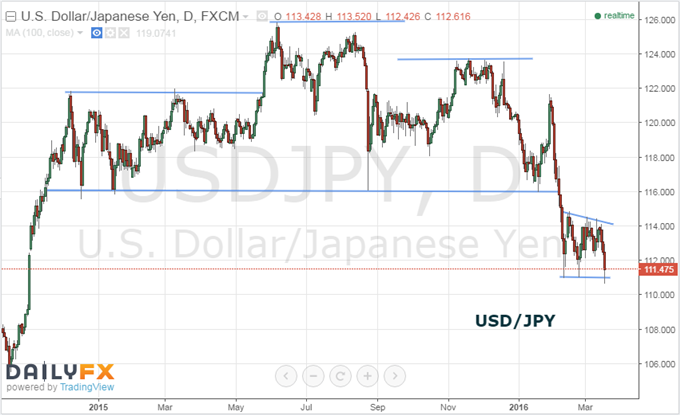 China’s economic slowdown and the volatility of its local markets has been afforded considerable print space in market headlines. As the world’s second largest economy and perhaps the most fluid evolution of a major player’s plug into the global financial system, this country’s health matters profoundly regardless of where you are. That is why groups like the IMF, World Bank and the Federal Reserve have all made mention of their concerns over China in their evaluations of global and local conditions.

For investing in China, it would seem a straight forward approach – simply invest in the country’s markets or assets. However, there are still significant barriers to investment, many markets are young and volatile, and there are concerns over manipulation. Some of these issues are circumvented in exchange traded products, but assets meant to mirror local inaccuracies are inherently problematic.

A good FX outlet for exposure to China’s rise and fall is the Australian Dollar. More than simply shares lines of longitude, Australia has important trade connections to the economic powerhouse. China consumes a disproportionate amount of the world’s natural resources, and Australia happens to produce many of the commodities that are most directly tied to the former’s engine for growth (coal, iron ore, etc). This connection is so significant that Australia managed to avoid the recession that many other countries globally suffered during the Great Financial Crisis (GFC) because of these exports. Below, we see the relationship between AUDUSD and a popular CSI300 ETF. 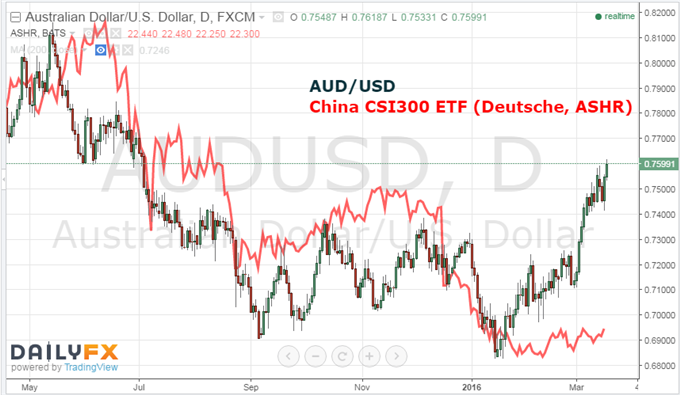 While local Chinese capital market benchmarks have shown erratic levels of both direction and volatility (likely owing to distortions that fall outside of normal market circumstances), AUDUSD continues to trade without reservation. The recent break from congestion and through a 200-day moving average comes as dire headlines for China have eased. While the exchange rate can move on other aspect, should a strong shift in confidence for the country occur, the Aussie Dollar will quickly sort the priorities. 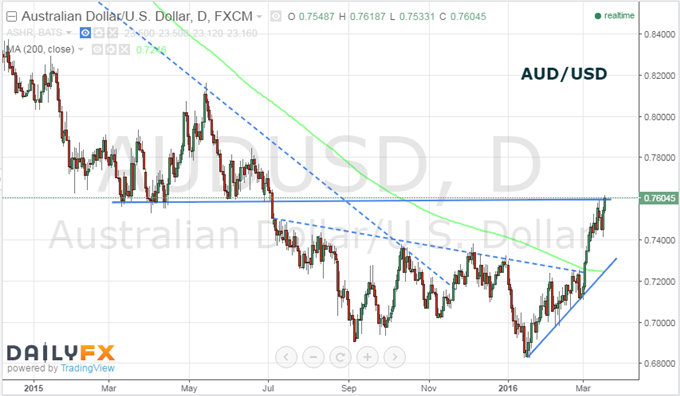 The incredible tumble in crude oil has stood as a banner for the broader slump in commodities. As the winds of growth for the world’s economy have cooled, demand for the raw materials used to fuel the production has naturally subsided. The price of these tangible goods is far more directly influenced by the basic supply-and-demand balance economic students learn about. Among the many commodities, the favorite amongst analysts, traders and journalists alike seems to be crude oil.

Not only has a slower pace of global expansion driven the price of oil lower, but there has been a particularly remarkable imbalance in supply-side conditions. When US crude topped $100/barrel following the plunge during the GFC, economies and firms that depend on oil revenues invested in production capacity and ramped up output. Moreover, previously small players (such as US shale oil interests) around the world looked to jump in to take advantage of the enviable revenues.

Trading oil is readily available via futures markets and some other derivative financial products. The most liquid of the typical instruments are the futures (West Texas Intermediate as standard grade); but it does have its drawbacks in cost, access and contract expiration. Certain currency pairs can offer continuous and low cost alternative with strong correlation. USDCAD is one of the most commonly quoted. While the US has increased its own output significantly in the past years, the trade between the two countries still finds exceptional influence through the commerce of energy commodities. The correlation below between US crude oil and CADUSD (the inverse of USDCAD) has proven strong through the period shown. 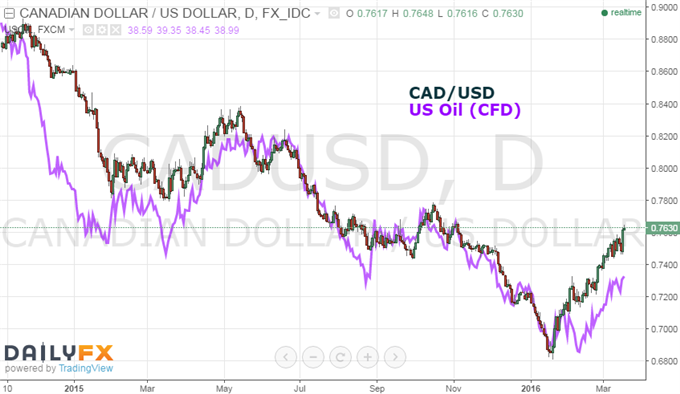 Just recently, we have seen serious technical progress in reversals from oil and USDCAD – certainly not a coincidence that they are unfolding at the same time. Having cleared a multi-year rising trendline support and 200-day simple moving average; a bigger turn in trend may be afoot for this pair. 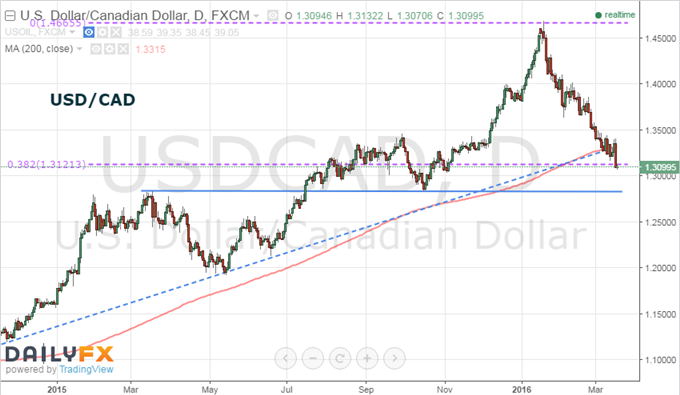 The current state of global monetary policy is unique to any time in history. We have seen the adoption of experimental programs (quantitative easing among them) leveraged to extraordinary size in an effort to arrest a global recession and financial crisis. While conditions eventually improved, the effort to support the system continued to run at a remarkable clip. Asset purchase programs, extended lending to banks and negative rates were built upon to head off fears and answer lingering issues (like low inflation).

The extreme effort to bolster accommodation was considered a boon as investors and populations sought whatever support they could find. However, the distortions and outright costs of these efforts started to become clear in more recent years. To the industrious FX trader, the disparate timing and application of policies between major central banks offered a considerable trends for the likes of Dollar, Euro and Yen crosses. However, that straightforward application of currency to theme has started to wane alongside the conviction of monetary policy’s efficacy. 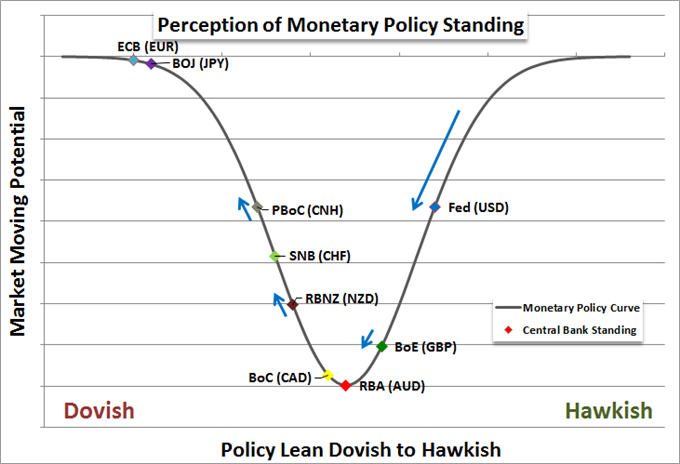 Recently, we have seen more accommodation generate less traction in investor confidence for growth, revenues and asset value. An exceptional example of this shift can be seen with the European Central Bank’s (ECB’s) remarkable efforts. As seen above, the ECB is considered one of the most aggressive ‘doves’ among central banks around the world. A policy of driving rates to negative and buying assets is aimed at flooding the system with Euros. That did lead to a decline in the currency’s value, but the perception that the extremes have been met may have been marked. 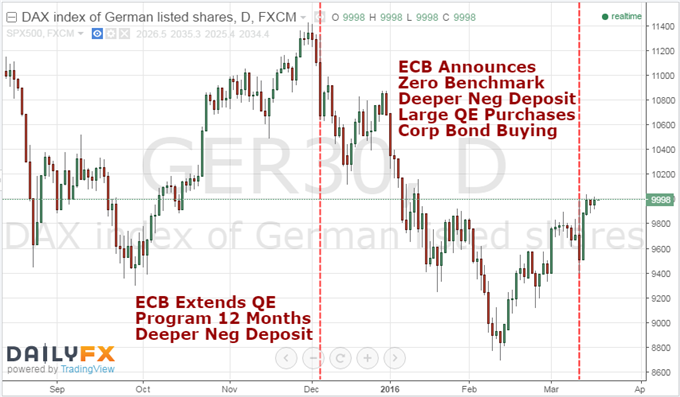 We can see a contradictory response to exceptional easing efforts by the ECB in the above chart of the German-based DAX equity index. Upgrades to quantitative easing programs, moves to negative rates and an expansion of target assets to purchase would theoretically lift the market. That wasn’t the case however as investors deemed the effort smaller than what they had anticipated or otherwise representing a greater cost to the financial system than its perceived return. 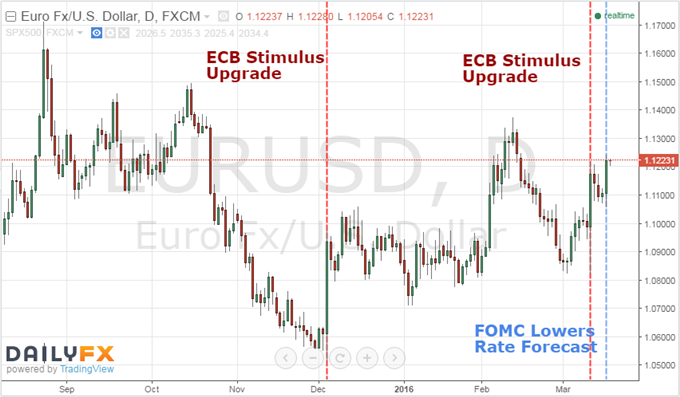 The Euro reflected a similar change in assumption over the effectiveness of monetary policy for the economy and financial system influence. On the same upgrades as were seen in the DAX chart, we see the EURUSD advancing despite an outcome that would be thought to devalue the currency everything else being equal. That said, the Fed’s moderation in monetary policy view offered the expected response from the Dollar and pushed the pair higher.

This is one of the more variable, major themes in the market; but its influence is wide-ranging. As we see the markets weigh in on efficacy, projected economic influence and relative effort redirect the flow of global capital, the exchange rates at the center of this current are a key gauge.