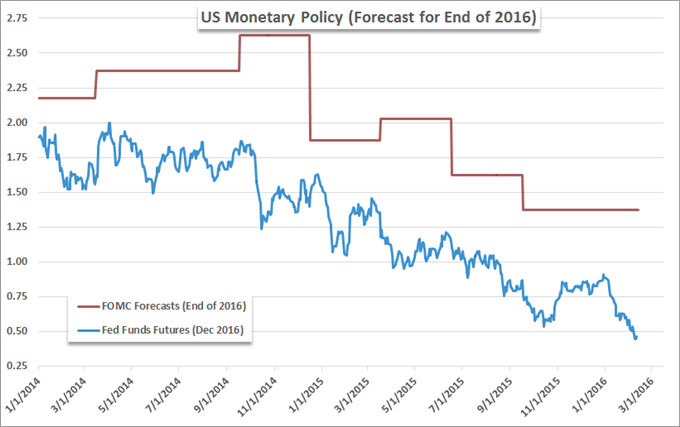 Fed Outlook Puts US Dollar and Equities In Troubling Position

See the DailyFX Analysts' 1Q forecasts for the Dollar, Euro, Pound, Equities and Gold as well as our favorite 2016 trading opportunities in the DailyFX Trading Guides page.

Fed Chair Janet Yellen testified on monetary policy in her semi-annual (Humphrey-Hawkins) update before a clearly dissatisfied House. A range of topics was covered for the event, but traders were specifically honing in on all the remarks for clues as to how the central bank plans to navigate policy over the coming months. Given the market’s floundering, it was clear that there was no clear consensus on how Yellen’s responses to Congressional questions sets the stage for a more dovish or hawkish path. This is an uncomfortable ambiguity to maintain.

There are many implications born from monetary policy beyond the expected increase or decrease in market based rates. The redistribution of capital through changing speculative views is particularly dramatic now with the US the only major policy group pursuing active tightening while its counterparts are either neutral or proactive with stimulus efforts. These tides can carry different consequences for key market benchmarks. In particular, the Dollar and US equities – which have maintained a positive correlation over the past months – stands to see dramatically divergent responses to next steps from the Fed.

Before considering the impact that monetary policy can have on the currency and shares, it is important to appreciate how the market’s expectations have developed. Expectations of a return to rate hikes (a ‘hawkish’ regime) have gained considerable traction over the past few years as general FOMC targets for employment were reached and expectations for inflation lifted. That said, outright hawkishness took an abrupt turn around the first quarter of last year.

In the chart above, we find the difference between the market’s and FOMC’s expectations for monetary policy pace. This is specifically the forecast for the benchmark rate through the end of (December) 2016. Both central bank body and average speculator have lowered their forecasts over the past two years; but it is worth nothing that the market has consistently discounted the central bank’s views. 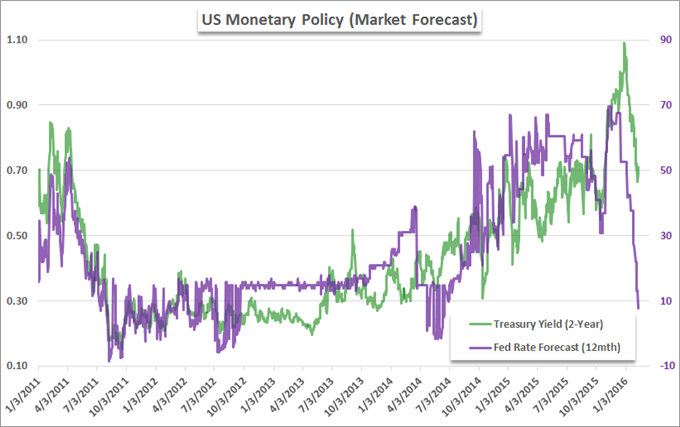 Focusing on the market specifically, the chart above looks at 2-Year Treasury Yields and the implied rate forecast for 12 months forward derived from overnight swaps. Both have fallen dramatically since the first rate hike was secured back on December 16. Despite the FOMC’s official forecast – last updated in the December update – calling for 100 basis points (bp) of hikes through this year, market participants are heavily debating even one standard, 25 bp hike through February of next year. That is a wide contrast. 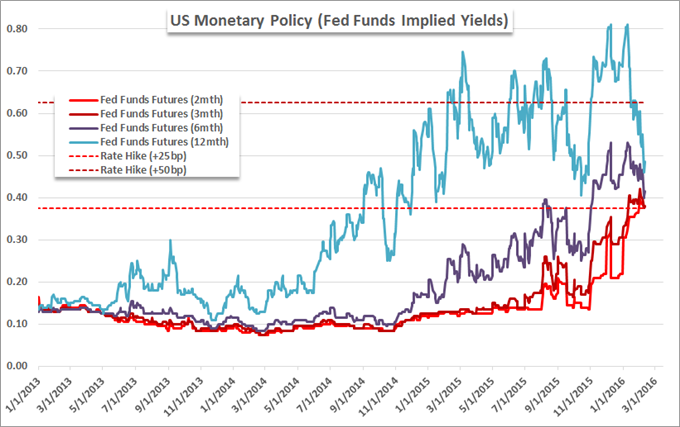 Naturally, as the outlook for rates sours, the expected pace of hikes from the central bank drop as well. Above we see the implied benchmark rates 2, 3, 6 and 12-months forward through Fed Funds Futures. Where the spread was widening for a year and a half through December/January (though still well below the central bank’s own forecasts), we can see that the outlook has collapsed back towards the current rate.

Rate hikes are a boon for the US Dollar. Expectations for rate hikes, even more so. Rates of return globally are extraordinarily low, so there is little tangible return to be made on carry activity. However, with the expected change in rates, immense capital changes occur. Considering the Federal Reserve is the only major central bank actually tightening the reigns on policy while others actively let out more line, the leverage this disparity has is remarkable. 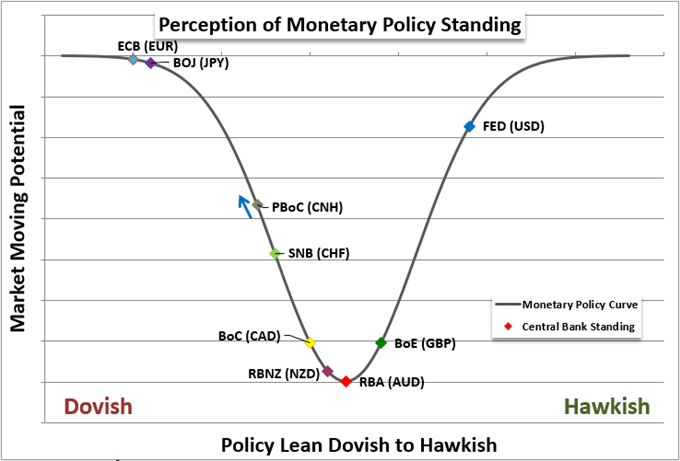 The US Dollar has certainly absorbed the hawkish implications of both actions and forward guidance from the US central bank and turned it into significant price gains. Yet, this is not a fundamental premium that is permanent or even decisive. As the expectations for tightening whether it be a slower pace through the future, no follow up to the first move in December and certainly a reversal of standing; the currency can lose traction. That is what has happened recently. 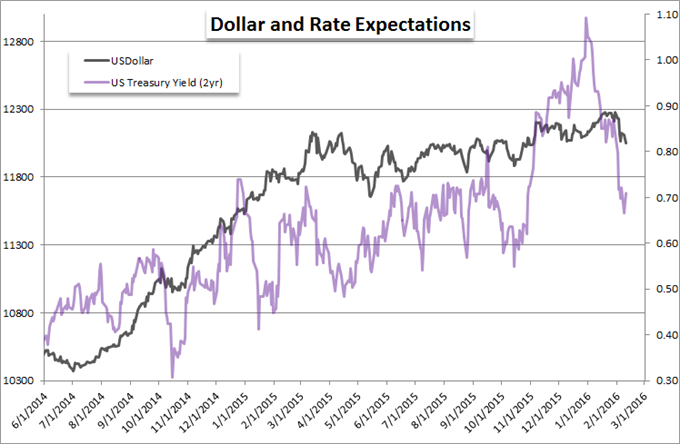 Above, we can see the influence of the tempered rate expectations. For Treasury yields, there is a far greater sensitivity to the changing winds. The two-year yield has plunged with the unfolding speculation. The Greenback in turn has not marked as dramatic reversal but it has certainly slowed the ambitious advance it marked in previous years. 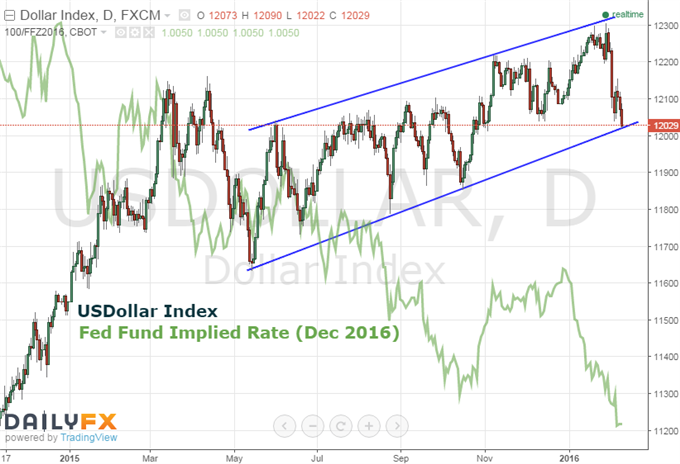 A slowed trend can quickly turn into a critical breakdown for technical traders should rate doubts turn into speculative repositioning. Above, we can see the market-implied rate through the end of the year – which has dropped off – compared to the USDollar. Pace has been the key change so far, but clear 12,000 and it may signal a more rapid loss of premium.

Where higher rates is a boon for a currency as it diverts capital from alternative international investments, it is a considerable risk for domestic capital markets. In the years since the Great Financial Crisis ended, capital has chased higher returns (through capital returns of buying-low-selling-high more than interest/dividends/yield). Key to supporting this optimism tinged with moral hazard whereby investors deemphasized the risk associated to their exposure was the presumption that the Fed and its international counterparts were perpetual stabilizer for the market. Yet, as that support ebbs with rate hikes and talk of balance sheet reductions (that hasn’t started just yet), investors assess a greater personal risk and look to reduce exposure. 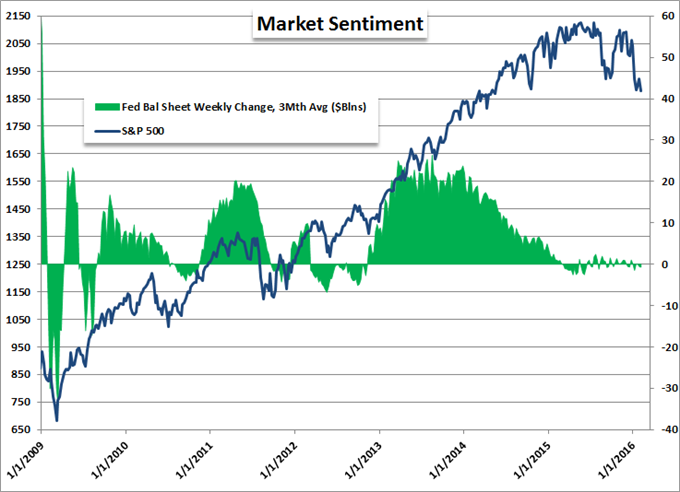 One chart to give evidence to the market’s dependency on monetary policy to launch its optimism and exposure is seen above. The S&P 500 is overlaid with the three-month rate of change in the Fed’s balance sheet. As stimulus ballooned with TARP and TALF to QE1, QE2 and QE3; emboldened investors looked to build their portfolios to benefit the period of distorted market strength. Yet, on that same token, when the QE3 program was ‘tapered’ and the central bank leveled out; progress for stocks stalled and grew more volatility. 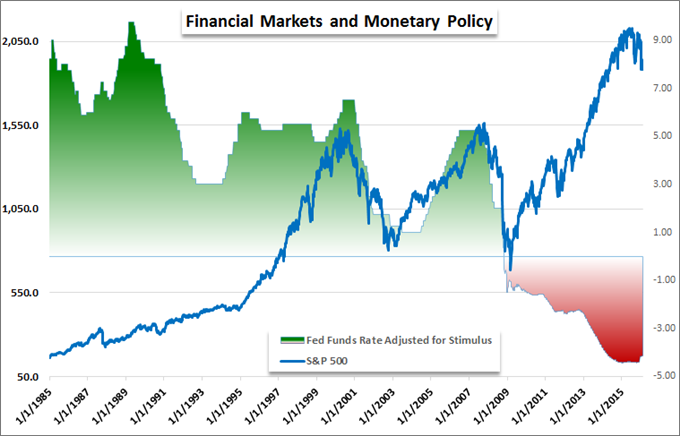 To aggregate stimulus via balance sheet size with interest rates – which have hit zero long ago – the above chart looks to account for the implications of the two programs together. Using an equivalency calculation the Fed and then Chairman Ben Bernanke offered some years ago, we can see a steady drop into negative territory for the adjusted market rate helped encourage greater exposure. Yet, that support topped and started to turn when the Fed hiked its rates for the first time. 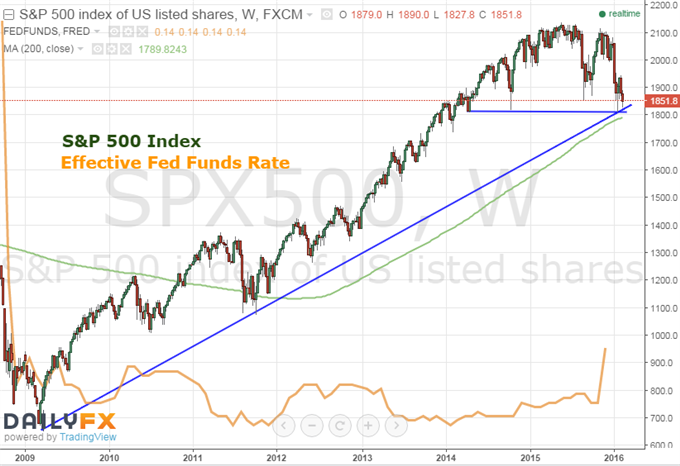 Like the USDollar Index, the S&P 500 is facing serious support on a multi-year basis. Yet, its motivation for a breakdown would fundamentally be different than the currency’s. An easier monetary policy hurts the Dollar but it would theoretically be a boon for the shares market. I say ‘theoretically’ as there is a degree of self-fulfilling prophecy to monetary policy lifting markets. Even a delayed hike may not stop a quick drop in general investor confidence if belief in global monetary policy as a buffer to risk falters. 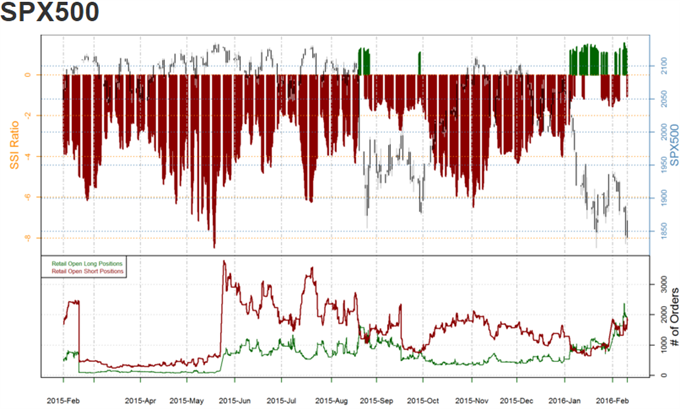 Looking at speculative positioning, retail trades are on the fence as to whether the SPX500 holds support or breaks through. The level of long and short positions trades off for dominance and in turn leads to flipping net primacy on the Speculative Sentiment Index (SSI). Though it should be noted that both sides of the market are building their exposure quickly as the assumption of a sizable move builds.

See how retail traders are positioning on many assets including key FX pairs, commodities and more on the DailyFX Sentiment page.