While pressure seems to have eased for most of the direct barometers of Chinese financial health, there are still a few gauges flashing red. One of the most concerning is the Hong Kong Dollar. The currency is set to a defined range to the US Dollar, but it is also a de facto proxy currency for capital flows from and to mainland China. That creates strain given the efforts to loosen the Yuan’s (Renminbi) anchor to the Greenback and the escalated stress of supposed capital outflows from the country.

So far, 2016 has seen a remarkable tumble for the HKD. In the slow opening weeks, the USDHKD slowly lifted from the 7.7500 the pair had been anchored to for much of the previous four months. Over just the past week, the intensity has grown exponentially. This is the sharpest increase since the peg to the US Dollar was reintroduced back in 1983 and it lifts the exchange rate to its highest level (on a close basis) since August 2007. 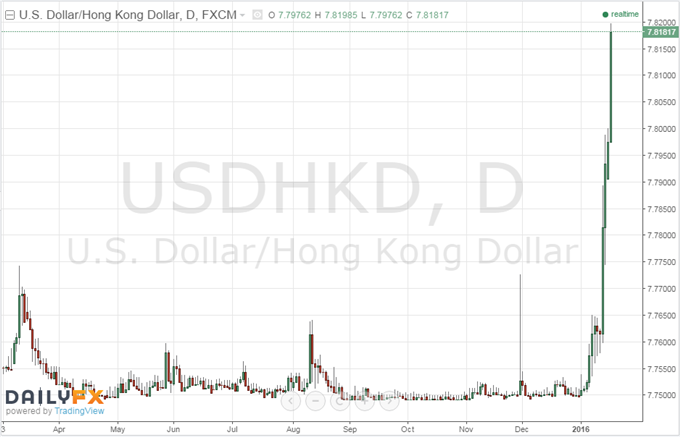 A Brief, Modern History of the Hong Kong Dollar

As with many currency regimes, the valuation method of Hong Kong’s money has experienced a number of changes over the past decades and centuries. Following nearly 230 years of some form of connection to British currency directives, the Hong Kong Dollar was moved to a peg against the US Dollar in 1972. Between 1974 and 1983, that peg was changed to a float, but a strong advance among – among other factors – led to a return to a controlled range, billed as a peg. 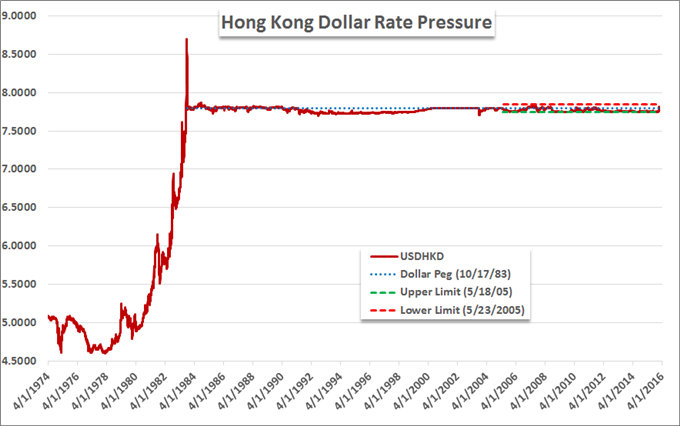 Movement around the USDHKD anchor value of 7.8000 was further tightened in 2005 when the Hong Kong Monetary Authority (the country’s equivalent of a central bank) committed to intervene on behalf of the local currency should it advance beyond 7.7500 or slide below 7.8500. As of Tuesday, there was still considerable room within the official range for the rate to move before it reaches the artificial boundary, but the current pace could easily bring us to the limit within a few days. 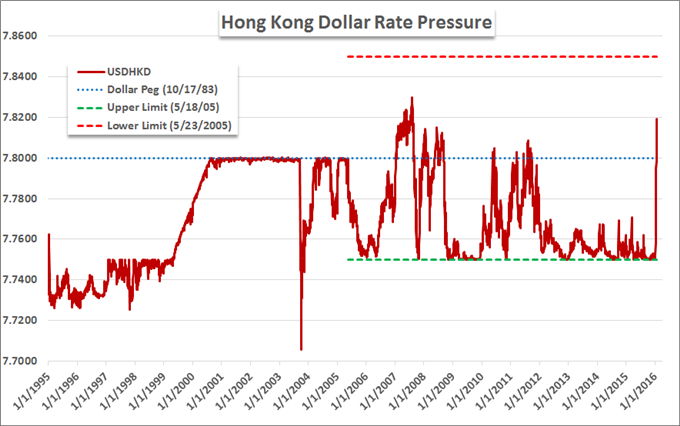 What makes Hong Kong’s exchange rate situation all the more challenging is the region’s explicit and implicit connections to China. On July 1, 1997, Hong Kong officially became a ‘special administrative region of China with a high degree of autonomy’. The unique currency and some of the key economic structuring of the region were maintained through this transition. However, practically speaking, it would become an important conduit for the movement of funds to and from Mainland China. Even though direct trade has been established via successive efforts to liberalize the official Renminbi exchange lines, the pressure has not been relieved for the HKD.

Already loosening its official control over the exchange rate, Chinese authorities announced a change in the way that its establishes the daily Yuan fix (established via the previous day’s close, valuation on a basket rather than just USD and some measure of discretion established on the availability of the currency) on August 11, 2015. USDHKD initially rallied alongside the USDCNH surge, but the former’s climb quickly retreated back to the lower band while the latter continued to advance. 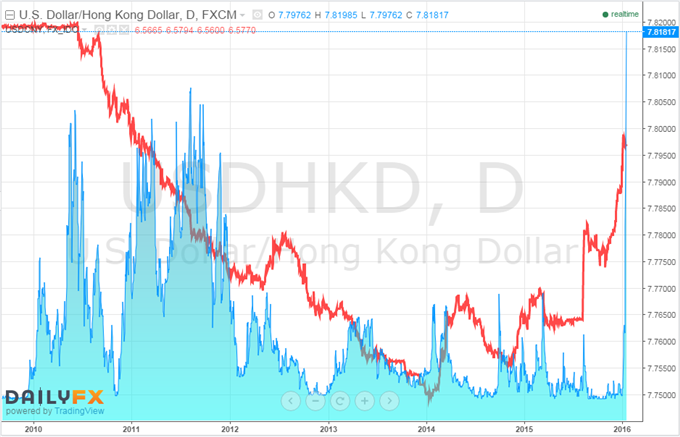 Removing or altering controls from one outlet of Chinese capital and not the other can create functional problems. If the repatriation continues through Hong Kong without a proper balance or offset, the currency will breach the bounds of its set range. Releasing the ‘peg’ is a speculative view with growing conviction. This is an extraordinarily dangerous view, however, as officials can quickly act to reverse the recent exchange rate move by using a tool as common as FX reserves. Alternatively, positioning for the opposite – a reversion to the USDHKD’s lower bound – is perhaps more dangerous. While it may be moderately high probability, the fallout should it prove wrong could be extremely costly as sudden free-floats can prove very volatile.

As the policy authorities weigh their level of engagement in the market, USDHKD’s sharp climb presents an unseemly reflection of China’s financial health. The official Yuan/Renminbi exchange rate, lending rates, local capital markets and more are being held in check by policy changes that curb speculative and routine flows alike. This exchange rate offers another crack for skepticism to seep in. That said, this is not so simple a fix as other Chinese leaks. Should USDHKD hit 7.85, a decision may be forced by the market. 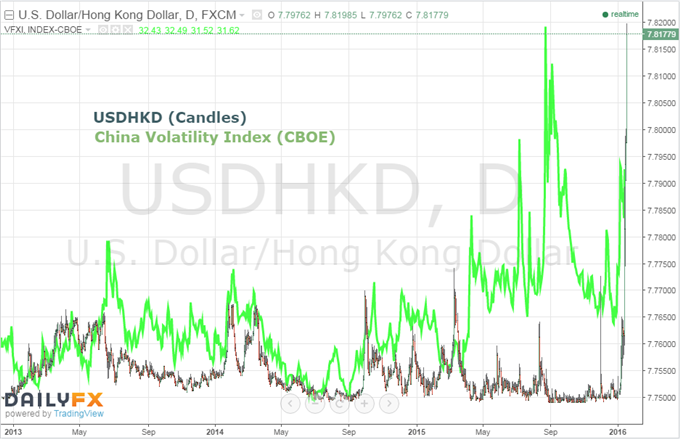