A volatile start to the year for Chinese markets has put significant pressure on the Chinese Remninbi, and there is reason to believe Chinese officials may soon look for a more aggressive depreciation for the domestic currency.

What are the risks to China?

Put simply, the biggest risk to China is a large-scale flight of capital. China’s regulations make it difficult for foreign investors to buy and hold securities directly in domestic markets. Yet it remains clear that there is significant foreign interest in Chinese assets, while there remains scope for Chinese investors to send money abroad. China’s Hexun news recently highlighted this risk precisely as domestic investors flock to foreign investment funds given sharp declines in domestic markets.

Overall trends suggest that it may be shedding those reserves quickly. As of December, 2015, China boasted a massive $3.33 trillion in FX reserves—30 percent of the world’s total. Yet even this sizeable sum represents a 13 percent year-over-year tumble, and clear market distress in January may have exacerbated outflows. 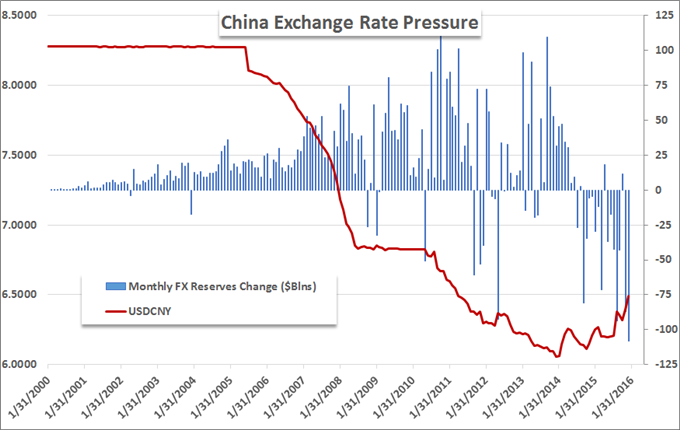 Increased pressure on Chinese officials raise the risk of fairly dramatic action. It certainly would not be alone in facing capital flight—sharp outflows from the so-called Emerging Market currencies and financial markets has been a major theme of 2015 and now 2016.

A key difference between China and major EM markets is nonetheless clear: whereas major EM currencies have fallen sharply, China continues to restrict the movement of the Yuan. This may need to change.

What might China do if conditions fail to improve?

Historical precedents suggest that China may have little choice but to sharply devalue its own currency, and indeed this remains a major risk for the CNY and CNH through the foreseeable future. We recently focused on sharp USD/CNH gains in particular when we warned of potential action from China’s central bank.

The freely-traded USD/CNH rate was substantially above the official USD/CNY rate controlled by the People’s Bank of China, and the near-record spread warned that most expected the PBOC to devalue the reference rate and send the USD/CNY higher. That spread shrunk substantially in the days that followed, but it wasn’t because the USD/CNY had risen.

Fairly obvious Chinese intervention in the CNH made it extremely expensive to hold USD/CNH-long positions, and a sharp sell-off in the USD/CNH put it roughly at parity with the reference CNY. Political pressures likely dissuaded Chinese officials from big moves in the CNY, but there is reason to believe that the balance has shifted in favor of more aggressive action.

A slowdown in global trade and economic growth has had a fairly clear impact on export-focused Chinese industry, and it seems likely that officials may soon move to boost competitiveness of Chinese exports via an exchange rate devaluation. The de facto peg between the CNY and US Dollar has meant that a stronger Dollar makes Chinese goods more expensive versus international counterparts as the Yuan moves higher with the Greenback. The PBOC has eased pressure somewhat by allowing the USD/CNY to rise 8 percent since late 2014, but major tumbles in Emerging Market currencies leave it substantially stronger against many competitors.

The question thus becomes clear: why wouldn’tChinese officials look to boost exports via a weaker CNY?

1. A competitive devaluation could spark a so-called “currency war” and invite retaliation from other major countries.

2. On the domestic front, a weaker Yuan would make imported commodity prices more expensive for consumers and drive inflation higher.

Yet a number of China’s major competitors have already seen a substantive tumble in their own currencies—thereby giving the PBOC the justification to devalue the Yuan. A simultaneous downtrend in global commodity prices has had a fairly substantial effect on inflation, and the domestic consumer may feel less pressure from rising import prices.

Chinese officials have taken a fairly strong line against speculation on further CNY weakness, but this could be interpreted as a warning against speculation in the USD/CNH. Indeed we see more and more reason why China could soon announce a substantive shift in exchange rate policy.

A sudden change in CNY exchange rate policy would likely have a substantial effect on the economies and markets of China’s major global competitors, and this remains a key risk moving forward. Keep an eye on the Japanese Yen and other Asia-Pacific currencies in particular through the foreseeable future.