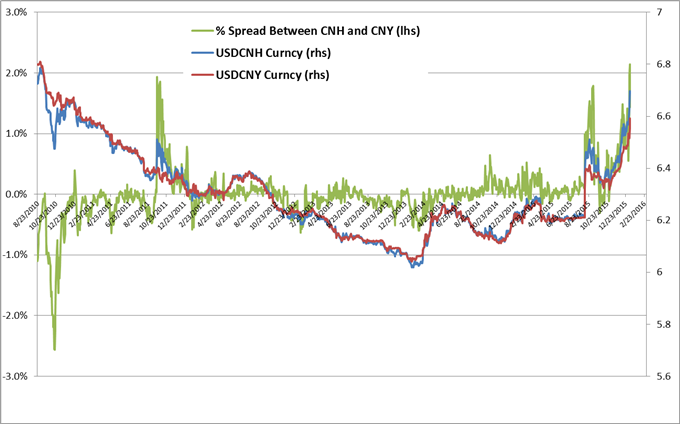 Sharp volatility in Chinese financial markets has helped push the Chinese Yuan to fresh five-year lows, and official reactions have made it clear that China’s central bank is prepared to allow further USD/CNY appreciation. The Offshore Chinese Yuan (CNH) has likewise followed the reference rate sharply lower, but it is important to know that the spread between the offshore and onshore has suddenly surged to its largest on record. Why does this matter?

The CNY is officially the currency which is managed by the People’s Bank of China, while the CNH is the currency allowed to trade offshore (see more here). Hence traders who wish to gain exposure to the Chinese Yuan will do so through the CNH.

The CNH has historically traded within a very narrow range against the benchmark CNY as traders anticipate the People’s Bank of China will keep volatility low in the benchmark domestic currency. Yet a recent surge in the USD/CNH warns that many fear the Chinese central bank may look to force further depreciation in the CNY. And indeed, this is one of the clear signs which warn of the potential for volatility ahead.

The People’s Bank of China has responded to such pressures by saying it maintains the ability to keep the CNY stable, and it has likewise made it clear that the Yuan could in fact appreciate at any moment. Chinese officials are clearly under pressure domestically and internationally.

And herein lies the difficulty: The USD/CNH remains in a clear uptrend, but we cannot rule out a sharp countertrend move if and when the PBOC decides it must reaffirm its commitment to exchange rate flexibility.

Such uncertainty can be seen both in the spread between the USD/CNH and USD/CNY (chart above) as well as a sharp jump in volatility prices for the CNH.

Traders are Pricing High Volatility for the CNH through Coming Week

Traders should proceed with caution in the USD/CNH until we see a marked contraction in volatility prices as well as the spread between the CNY and CNH. The current market trend favors further USD/CNH gains, but elevated political risk means that there is likewise potential for big short-term declines.