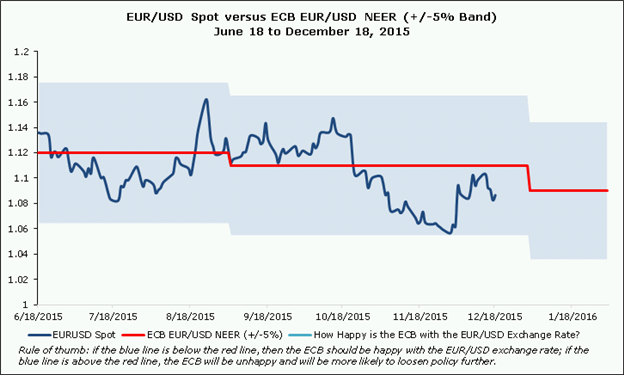 Coming into Q4’15, our main theme for EUR/USD was renewed downside pressure contingent upon the European Central Bank starting the next leg of its easing program. Indeed, this proved to be the singular largest factor driving the pair: once the ECB on October 22 hinted at the possibility of a rate cut and changes to its QE program on December 3, EUR/USD began a one-way move from above $1.1300 to below $1.0600 in just under six weeks. When the ECB failed to meet market expectations, EUR/USD snapped back even quicker, flirting with $1.1100 at points between when the ECB meeting on December 3 and when this forecast was finalized on December 18.

EUR/USD trading in the second half of the year, and especially in Q4’15, proved itself to be rather revealing of the psychological conditioning central banks put market participants through. Economic data seemed to matter less and less, while central bank events or speeches mattered more and more. Between Q3’ and Q4’15, it became clear that the major central banks would only act around policy meetings in which they were armed with revised economic forecasts to support their data revisions; inherently, markets had become skeptical of those policymakers who had previously changed policy unexpectedly without a concurrent reassessment of economic conditions.

This particular nuance of central bank policy is the backbone of our neutral forecast for EUR/USD in Q1’16: market participants will be wholly fixated on see what the ECB and the Fed will do next at their respective March policy meetings, the next time when either central banks update their respective staff economic forecasts. For the US Dollar side of the equation, traders should be keenly focused on incoming inflation data: any uptick in inflation could provoke the market to adjust its expected rate hike timeline upwards, closer to the Fed’s expected path; markets (per Fed funds futures) are pricing in two rate hikes next year, while the Fed’s “dot plot” suggests there will be four in 2016.

On the Euro side of the equation, it’s important to recall why the ECB only cut its deposit rate on December 3 and did not make what the market considered to be a material change to its QE program (beyond what was already priced in – which was priced in pretty quickly after October 22). The ECB made clear that economic data ex-inflation – Euro-Zone PMI figures were hitting four-year highs at the time of their December meeting – was not poor enough to warrant a significant upgrade to QE. Likewise, financial conditions were not considered a headwind with the EUR/USD trading nearly -5% below the ECB’s EUR/USD NEER (nominal effective exchange rate, the technical assumption underpinning the ECB’s growth and inflation forecasts) at the time of the December meeting.

Why we ultimately think that current fundamental conditions will pave a sideways trading environment for EUR/USD is that the counterbalancing of markets questioning the performance of US economic data and how it will affect the rate hike timeline versus the risk of European financial conditions tightening amid stronger data will neutralize each other.

A stronger EUR/USD will make the price transmission mechanism in the Euro-Zone slower, only becoming problematic for the ECB should the spot rate supersede the ECB’s NEER. With the ECB’s NEER technical assumption due at $1.0900 for 2016, we believe that even if markets find US economic disappointing, the overhanging threat of the ECB acting to fight a stronger Euro should keep the exchange rate in check. EUR/USD hasn’t closed outside a +/-5% band of the ECB’s EUR/USD NEER at any point over the last six months; and when it was closest to its lower -5% band on December 3, the ECB ultimately didn’t use its few last remaining easy monetary policy bullets.

Thus, reflexively, a stronger EUR/USD at any point in Q1’16 will increase the chances of the ECB acting again in March; and if EUR/USD is weak all quarter long, then it becomes highly unlikely that the ECB ease further – which in and of itself, as we saw on December 3, is a very powerful force to keep the Euro afloat. –CV

We were looking for the broader decline in EUR/USD to reassert itself or at least try to in Q4’15. For the most part this is what we got from mid-October to early December as the Euro fell nearly 10 big figures before finding support just above $1.0500. Now we had been hoping this move would clear up the technical picture for the first half of 2016, but the aggressive rally from $1.0500 has really only created more doubt on direction.

The big dilemma heading into 2016 is deciphering whether the rally from $1.0500 was the start of some sort of “double bottom” pattern ahead of a more important rally, or just a relatively minor counter-trend recovery before another impulsive move lower. The timing surrounding the December low suggests caution at a minimum as it occurred right around 18 months from the May 2014 high. Eighteen months in one general direction is usually an important “mile marker” for any instrument and a lot can be learned from how a market reacts around this key interval.

A continuation higher from $1.0500 followed by a weekly close above resistance at $1.1400 in 1Q16 would give further credence to the double bottom interpretation. A move over the August high around $1.1700 would actually confirm the pattern. Failure to gain a foothold above $1.1400 followed by weakness under $1.0500 would signal only a short-lived recovery and open the door to another important leg lower below parity in 2016. 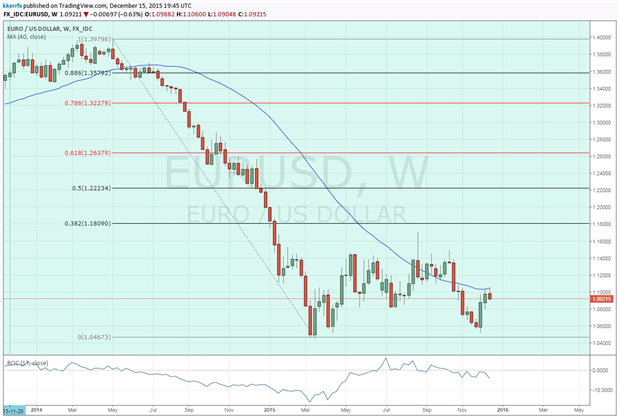