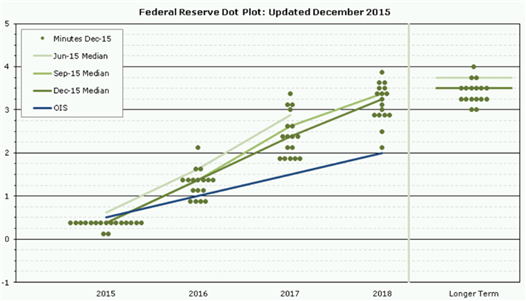 The US Federal Reserve has finally raised interest rates and ended its long-standing Zero Interest Rate Policy (ZIRP); this in itself should leave the US Dollar well-positioned versus major counterparts through the start of 2016. And indeed the Fed’s hike stands in sharp contrast to the European Central Bank, which moved to cut interest rates just a week before the FOMC decision. Market reactions to both the ECB and the Fed are nonetheless telling—the Euro rallied sharply as the ECB’s rate cut was less aggressive than feared, while the US Dollar was mostly unchanged following a lackluster Fed announcement. Expectations play a massive role in driving currency price moves, and we focus in on the Fed in particular to start the New Year.

The US Federal Reserve projects that it will raise interest rates roughly four times and by a cumulative 100 basis points in 2016, but market expectations call for almost exactly half of that at 50 basis points. In more ‘normal’ market conditions 0.50 percentage points may not seem like much of a difference. Yet in a world with negative nominal interest rates those 50bps could make the difference between a continued US Dollar uptrend or trend reversal.

Federal Reserve Forecasts it will Raise Rates Four Times, Markets Predict Half of That

The question is thus simple: whose predictions do we trust—the market’s or the Fed’s? The chart above shows that the Fed’s median forecast on interest rates for 2016 and beyond haven’t changed significantly in the past six months, and the consistency encourages confidence. Yet history paints a mixed picture for Fed predictions, and a wide range of external risk factors to US economic growth suggests that a consistent string of rate hikes remains unlikely.

Unless we see a fairly considerable re-pricing of interest rate expectations, we see evidence that the high-flying US Dollar could correct lower versus major counterparts.

US Dollar Positioning Shows Uptrend may be Stretched, Early Signs of Potential Reversal

One clear difficulty is that the Dollar has rallied sharply as traders bought into gains, but the lack of fresh buying could send the high-flying Greenback lower through 2016. And indeed we need only look at CFTC Commitment of Traders data to see the first signs that traders are losing interest in buying into the US Dollar uptrend. 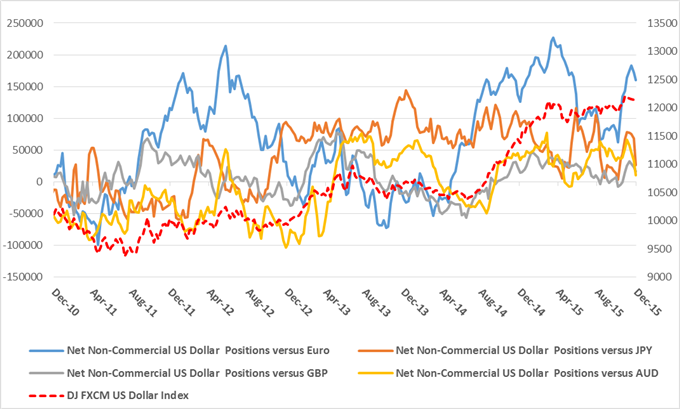 It’s early yet, but we’ve already seen an impressively sharp pullback in speculative long positions in the US Dollar versus the Euro, Sterling, Japanese Yen, and Australian Dollar. This hardly condemns the US Dollar to weakness, but it bodes poorly for trader positioning and sentiment into 2016.

And such a pullback is also indicative of the central theme for the Greenback: given that it has gained so sharply, does it have room to run further? As our Technical forecast will show, we see measurable risk that the Dollar Index will set an important medium-term top and trade lower through the first quarter of 2016. Whether or not this comes to bear will likely depend on whether the US Federal Reserve is able to meet its own forecasts and raise interest rates higher and faster than markets predict.

Technicals: Grinding into a Top 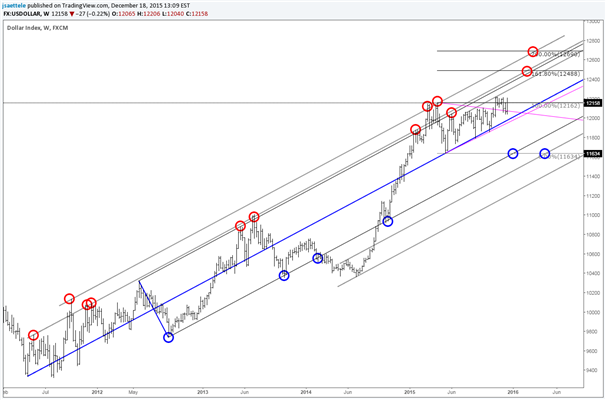 Let’s first review the Q4 2015 technical outlook, because most of the analysis remains relevant. We wrote 3 months ago that the range since the March top “has taken the form of a triangle with a long term median line and 200 day average providing support. The energy created by the last 6+ months of sideways trading could produce the next directional move but pay attention to uptrend resistance for a failed breakout. Seasonal tendencies are bullish into late November but then turn bearish into year-end. The USDOLLAR index could grind higher for the next 2-3 months…”

The 4th quarter brought another leg within the triangle, which bottomed at support in mid-October. The sharp turn higher led to a breakout in November that has so far proved false. However, the breakout failed below cited resistance, which is a concern (lower ‘ceiling’ indicates weakening trend). Weakness in early December was in line with seasonal tendencies but former triangle resistance provided support, which is a positive. In short, conflicting signals abound (uptrend weakening but still an uptrend). Triangle breakout objectives are 12488 and 12690. The first measurement intersects uptrend resistance in late February. The second measurement intersects uptrend resistance (the higher one that was resistance in March and April) in late March. Focus is on these levels (specifically the uptrend resistance lines) as long as price is above the median line (blue line) that provided support in May, August, and October. Weakness below the median line would probably trigger sharp weakness until the May low before the next rally attempt.

In short, there are signs that the rally is weakening but not that it is over. Well-defined resistance from slope lines and measured objectives are higher so look towards those levels as long as price is above the long term median line. Weakness below the median line would indicate a bearish opportunity towards the May low.