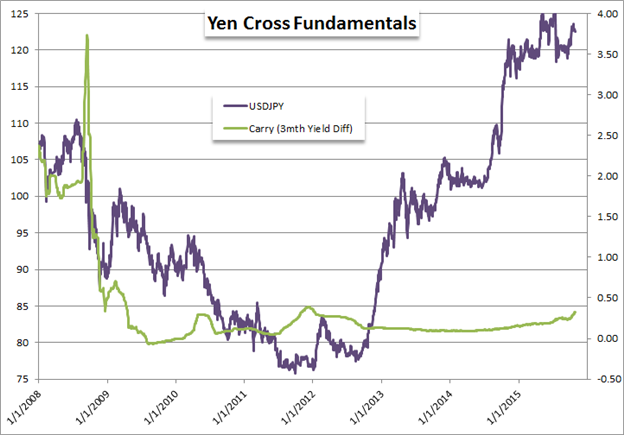 Trading Opportunities of 2016: Yen Will Break Complacency and BoJ Force

The Yen crosses – like developed economies’ equities – have stretched the boundaries of traditional valuation. It is not uncommon in the markets to see something move above or below what would be loosely considered fair value, even significantly. However, years of appreciation for both of these markets has seen an exceptional gulf open to comfortable fundamental levels. One of the most basic FX measures is illustrated in the graph below. For decades, Japan’s underlying rates have hovered around zero. In turn, the appeal of cheap funds has endowed the currency a ‘funding’ status for the carry trade. When risk appetite rises, investors in the FX space will look to collect the yield in carry and the Yen was among the most common facilitators of the trade (a fancy way of saying it was frequently on the short side of these types of positions). Yet, as USDJPY and other Yen cross exchange rates continued to rise, the expected return (carry) held to exceptionally low levels.

The gap between the expected income from the Yen crosses and their prevailing market price was bolstered by the BoJ’s monetary policy approach (QE) devaluing the currency and by an exceptional appetite for risk that made even these tepid returns a speculative target.

It is difficult to maintain such a wide divergence in price and value. If the disparity closes, it is unlikely that returns will be the leg closing the chasm as that would insinuate massive rate increases from carry currencies. Therefore, the risk is that Yen crosses ‘come back down to Earth’. And, the greatest vulnerabilities are a falter in market-wide sentiment or the perception that the BoJ has reached the extent of its accommodative monetary policy.

In general, most Yen crosses are ‘rich’ to the levels we saw before speculation of the first BoJ QQE program lifting the market. However, some pairs have seen the excess deflate recently. If the motivation for the Yen to gain (Yen crosses fall) is a belief that the Japan central bank has reached the end of its rope, I prefer crosses where the base currency is backed by a comparably dovish monetary policy and maintains the greatest buoyancy. In the list of crosses below EURJPY and CHFJPY most fit the bill. 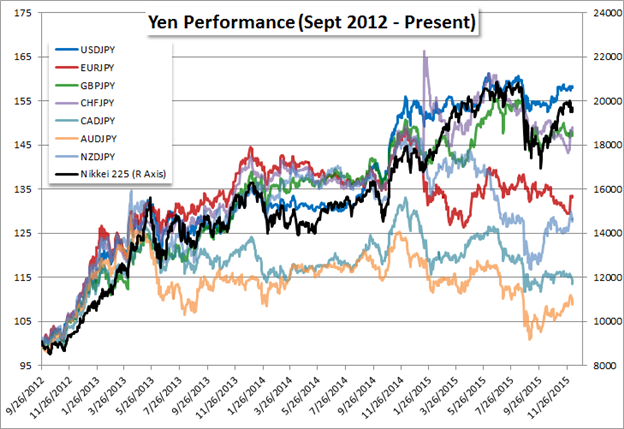 A risk aversion motivation in contrast would prove more universal for the Yen pairs. Yields from these crosses is historically very low across the board. However, there are certain pairs were the carry is thin yet prices are still very high. For USDJPY and GBPJPY, the anticipation that the Fed and BoE will be first to lift rates has afforded these particular pairs much more bullishness (and a stronger correlation to the Nikkei 225 – a sentiment metric). Yet, if risk appetite sours, the slim yields will won’t hold back the tide. It is critical with this Yen cross view that the fundamentals lead the way.

See the next Top Trade Opportunities in 2016: USDCHF Long