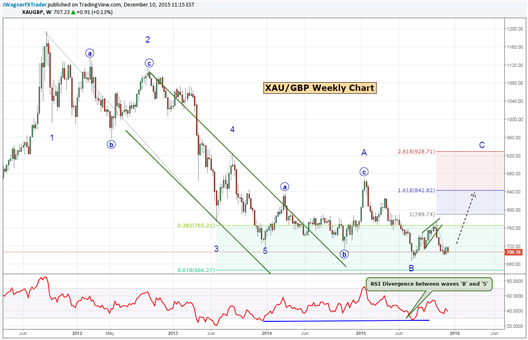 Trading Opportunities of 2016: More Than Irish Look for the Pot of Gold

Gold prices appear to be in an ending wave pattern that when finished could send the yellow metal higher. The ending diagonal pattern suggests prices could move back towards 1300-1400 over the coming months as the pattern typically gets completely retraced. Any dovish tone to the Fed’s interest rate hikes may add fuel to this bullish pattern if the interest rate hike path becomes less aggressive.

The possibility of a British exit from the European Union (known as Brexit) may anchor the value of Sterling down. Once the date is established for the vote, it is conceivable hedges may be initiated to neutralize the potential for a currency revaluation resulting from the vote. Therefore, it’s not just the Irish looking for a pot of Gold. The Brits may be looking to get in on it as well using Sterling.

Technically speaking, several GBP currency pairs appear ripe for Sterling weakness. For example, it appears GBP/JPY is placing the finishing touches on a large upward correction that could lead to a large sell off. Additionally, there are Elliott wave patterns that would fit into a round of GBP selling in GBP/USD, GBP/NZD, and EUR/GBP. Therefore, we may see broad based Sterling weakness. Using Sterling as the funding currency for Gold longs appears to have a higher probability outcome as we look to strip out the effect of the US Dollar.Specifically, looking at the technical chart of Gold priced in Sterling (XAU/GBP), it appears we are in the ‘c’ wave of an a-b-c upward move. If indeed this is the wave count, XAU/GBP could rise towards 850-900.

Should you decide to position in Gold or other markets, the risk to reward ratio is paramount. We’ve researched millions of trades and found that this one little tweak on risk to reward ratios increased the pool of traders who were profitable from 17% to 53%. Learn more about that tweak in pages 7-9 of the Traits of Successful Traders Guide [free registration].

See the next Top Trade Opportunities in 2016: Betting on the Curveball in Gold