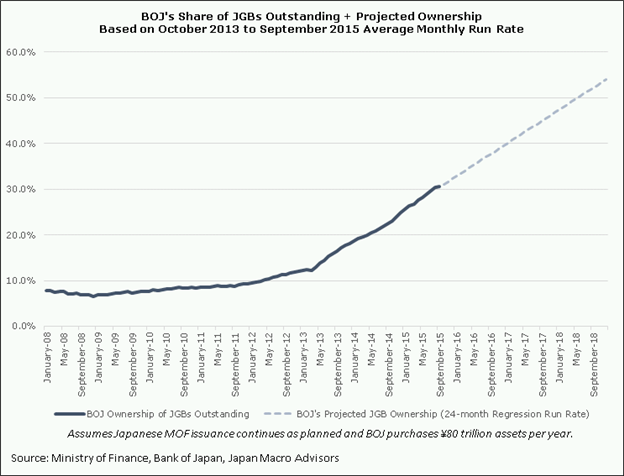 The Japanese Yen is heading into 2016 on strong footing – stronger than you think. Monetarily, the Bank of Japan is disinclined to act further as their current policies still course their way through the economy, which just exited recession territory. The policy meeting in mid-December which saw a ‘surprise’ announcement for expanded asset purchases was merely a technical adjustment: with the assets the BOJ targeting to purchase having appreciated over the past year, they will need to make additional outlays to purchases the same volume of securities. The cost of the BOJ maintaining its prior promises is rising. Liquidity could become an issue, raising the possibility of a 2003-like VaR shock in bond markets.

The BoJ will own over 30% of all outstanding JGBs by the end of 2015, and is on pace to own approximately 50% of all outstanding JGBs by June 2018. In 2003, from June to September, the JGB 10-year yield rose from 0.4% to 1.6%, which pushed the Japanese Yen up by about +8%. The simple reality is that the Japanese bond market is divorced from reality, with growth due at around +2% next year and the JGB 10-year yield holding steady around 0.300%. Any sign that the BOJ is having technical difficulties purchasing assets or issues about proper bond market function due to liquidity constraints could cause a knee-jerk reaction in yields, and thus, the Yen once more.

Fiscally, the foreign asset allocation undertaken by the Japanese Government Pension Investment Fund (GPIF) looks to be nearly complete, and should dwindle to a drop through 2016. The only situations in which it would make sense to see the GPIF begin to increase its foreign asset allocation is if the Yen strengthened rapidly or if foreign asset prices declined rapidly; in both cases, users of the Japanese Yen would gain purchasing power making foreign assets relatively more appealing. Inherently, before the GPIF becomes a material negative for the Yen once more, something will need to happen that would likely result in the Yen strengthening first.

Economically, the Japanese current account just extended its surplus streak to 15 consecutive months through September 2015. Like most balance of payments data, the impact of these economic trends is only seen further down the line – but we’re almost “down the line” now. BoP data takes 12-24 months to impact FX spot prices, meaning that by the end of 2016, the Japanese Yen should have an economic tailwind at its back. With energy prices so low – the Federation of Electric Companies of Japan says that Japan “is dependent on imports for 96% of its primary energy supply; even if nuclear energy is included in domestic energy, dependency is still at 82%” – it seems the current account surplus is safe through the early part of the year, which should pave the way for it to remain a positive influence on the Japanese Yen through 2016.

Politically, it may be unpalatable to see USD/JPY climb higher – for Japanese policymakers twofold. First, even though headline inflation remains lows thanks to dampened energy prices, other “non-core” costs like food are rising, which the weak Yen doesn’t help with. Second, now that Japan and the United States are on course to join the TPP, a stronger USD/JPY could prove problematic for US auto manufacturers, for example, which could result in an already-doubtful, anti-globalization Congress striking down the US’ involvement in the TPP altogether – which would be a very poor development for the Japanese automaker, which is widely regarded as a big winner of the TPP due to the greater penetration into US markets it will provide for Japanese automakers.

Let’s not forget that many of Japan’s neighbors are pursuing competitive devaluation policies that will likely result in market share being taken from Japanese manufacturers. A stronger Yen relative to the Chinese Yuan, for example, would pressure companies’ profit margins and fuel falling equity prices. A stronger Japanese Yen would be extremely problematic to the Nikkei: 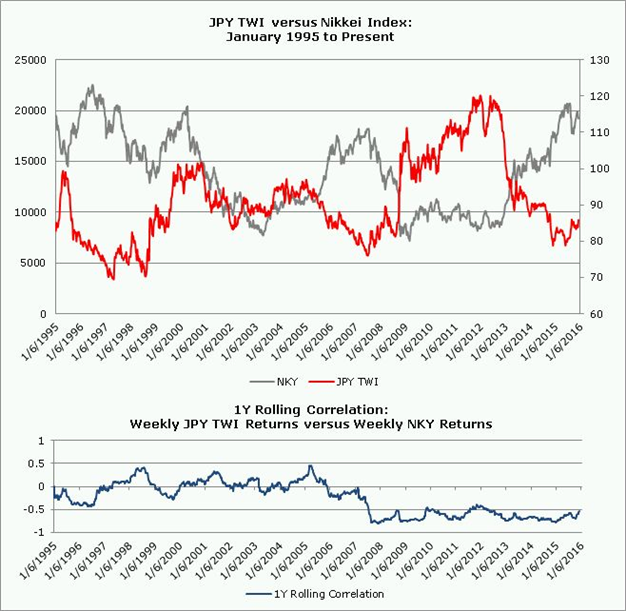 In sum, these conditions are not conducive to the previously ongoing financial and capital outflows that have previously led to Japanese Yen weakening over the past few months and years. With several of the major JPY-crosses at significant trend levels, it's worth watching to see if risk sentiment continues to dry up in the near-term.

If the aforementioned conditions– economic, fiscal, monetary, and political – lead us to believe that the Japanese Yen will strengthen, then a currency on the ‘other side of the coin’ would be good to pair up with: one with a central bank that is likely to keep easing; one with a government that is likely to pursue policies that could hurt the currency; one with a growing current account deficit; and one with the potential for political tail risk. Enter GBP/JPY. 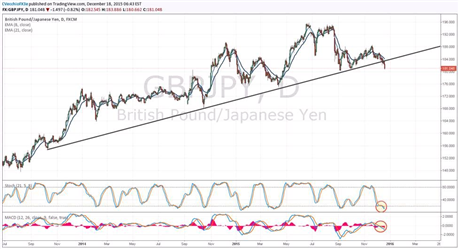 The British Pound hits on the wrong side of all of the boxes that we just checked in favor of a stronger Japanese Yen. Monetarily, the Bank of England is currently retrenching its expectations for its rate path; various measures of pricing see the BOE most likely raising rates in Q4’16 or Q1’17.

Fiscally, the Cameron government remains hell bent on austerity, and tighter fiscal policy (per the IS-LM-BoP or Mundell-Fleming conceptual framework of exchange rate movements) tends to lead weaken the local currency over time (contractionary policy reduces the economy’s potential to overheat, and thus, reduces the chance of overshooting inflation and the necessity for higher interest rates). Economically, the UK current account deficit grew deeper over those same 15 months the Japanese current account was sustaining a surplus.

Politically, the British European Union exit (‘Brexit’) is a path that, once traveled down far enough, may lead to irreparable damage to the UK’s relations with the European Union and reduce the UK’s global trade standing (London would more quickly lose ground as a global financial center).While a ‘Brexit’ is not our base case scenario, we think that the recent immigration crisis, should it continue or should there be another unfortunate series of events like the ones in Paris in another major European city, then it may feed into the pro-Brexit camp’s hand, increasing popular opinion for the UK to leave the European Union and retake control of its borders.

The fundamental contrast of the British Pound and the Japanese Yen, in context of recent technical developments, makes short GBP/JPY an appealing prospect for 2016. By mid-December 2015, the pair was starting to break down through a two-plus year trendline dating back to the October 2013, October 2014, and October 2015 year lows. Both daily and weekly momentum indicators suggest that renewed downside pressure was emerging into 2016: Slow Stochastics and MACD had started or were starting to move into bearish territory. Now that the trendline is breaking, a visit to recent swing levels lower seems likely: September 2015 low near ¥180.00; the April 2015 low near ¥175.00; and the October 2014 low near ¥168.00. Only if price were to fail to sustain a break below ¥180.00 and subsequently return above ¥189.00 would change this bias.

See the next Top Trade Opportunities in 2016: Key Currency Crosses to Watch amid the Diverging Paths for Monetary Policy