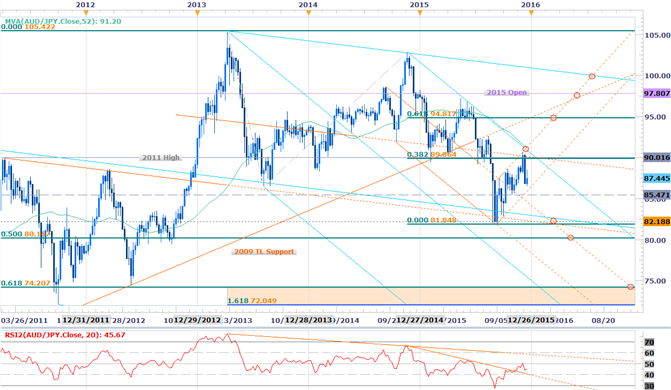 It’s been a turbulent year for markets and despite all the volatility, both the Dow and S&P are almost unchanged on the year as of mid-December. The close of 2015 saw the FOMC make their first move to normalize, hiking interest rates for the first time since 2006. However, the uneven global recovery leaves broader risk assets vulnerable heading into 2016 and a further unwinding of the carry trade may continue to pressure the AUDJPY lower.

With the Bank of Japan (BoJ) pushing back its expectations of achieving the 2% inflation target, it appears as though the bar remains high to see further expansion in the asset purchase program in early 2016 as Governor Kuroda continues to endorse a wait-and-see approach (JPY strength). In contrast, the Reserve Bank of Australia (RBA) may come under increased pressure to further insulate the domestic economy next year as China, Australia’s largest trading partner, continues to narrows its growth forecast with market participants largely anticipating additional monetary support from the People’s Bank of China (PBoC) in the months ahead. As a result, rather than adjusting policy to higher U.S. borrowing-costs, the easing cycle in the Asia/Pacific region may play a greater role in dictating RBA policy as Governor Glenn Stevens remains open to further reductions in the overnight cash rate. (AUD weakness)

From a technical standpoint, the AUDJPY has been trading within the confines of a broad and well-defined median-line formation dating back to 2011 with an embedded pitchfork off the 2013 & 2014 highs continuing to define the slope of this decline with precision. The rebound off the median-line in August / September of this year saw the pair rally into a critical inflection point heading into 2016.

Immediate resistance stands at 90 / 91.20 where the 52week moving average converges on the upper median-line parallel & basic channel resistance. The broader focus remains weighted to the downside while below this threshold with a break below the September low-week reversal close at 85.47, targeting subsequent objectives at the 81.84-82.80 range & the 50% retracement of the advance off the 2008 low at 80.16. A critical longer-term support zone rest lower at 72.05-74.20.

Note that the weekly momentum signature dipped into its deepest oversold condition this year since 2008, suggesting that the broader advance off the crisis lows is indeed complete. A breach above the trendline extending off the 2014 high invalidates the immediate outlook and risks a substantial push higher before turning over. Such a scenario would eye resistance objectives at 94.82, the 2015 open at 97.80 and broader structural resistance at the upper median-line parallel just shy of 100- (Critical). Bottom line: we’ll be looking for the decline off the 2013 high to carry over while below this near-term resistance confluence targeting the median line. A breach above this key medium-term, inflection point risks a recovery back towards broader structural resistance.

See the next Top Trade Opportunities in 2016: Japanese Yen Set to Shock Markets – But Not Why You Think (Short GBP/JPY)

What Does a Forex Spread Tell Traders?