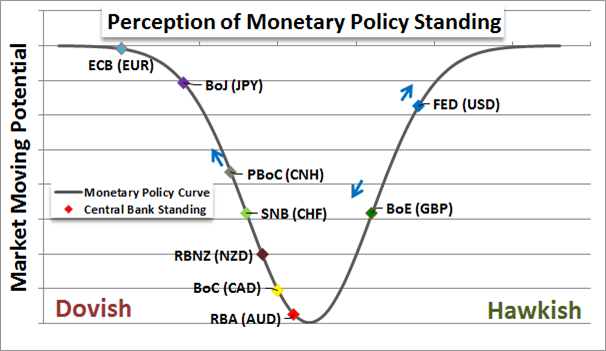 Trading Lesson of 2015: Key Fundamental Themes Can and Do Change

Fundamental analysis plays a crucial role in my trading. I may come across the most pristine technical setup I have ever laid eyes on and still would not take the trade if it directly conflicted with my fundamental evaluation. For me, this essential appraisal of the market starts with a big picture rooted in a top theme (such as general risk appetite or divergent monetary policy bearings). Without that comprehensive and persistent current feeding a trend, a move would be piecemeal and more likely to stall or reverse. That said, these overriding market motivators, can and do change with circumstance. I grew complacent to these shifting tides a few times this past year – particularly with the ‘relative monetary policy’ theme.

The first of these lessons was learned early in the year with the Swiss National Bank’s (SNB) failure to keep the floor underneath the EUR/CHF exchange rate. I took their vow to keep the 1.20 exchange rate in place – labeled a ‘pillar’ only a few days before its being abandoned – as inviolable. I did not in turn give enough credence to data showing the astronomical cost the policy effort was tallying for the effort. Even central banks have limits. Market evaluations can also shift, as I didn’t initially appreciate with the Euro’s position. After the European Central Bank (ECB) cut deposit rates to negative and embarked on a massive QE program, its currency took on the more traditional characteristics of a ‘funding currency’. I had thought the carry trade sidelined as rates were very low globally, but when the Euro surged alongside the August plunge in ‘risky’ positions, it was clear it had taken on a different bearing.

Graph Prepared by John Kicklighter based on Qualitative Evaluations

See the next Top Trading Lesson of 2015: Look Before you Jump, not When You Jump