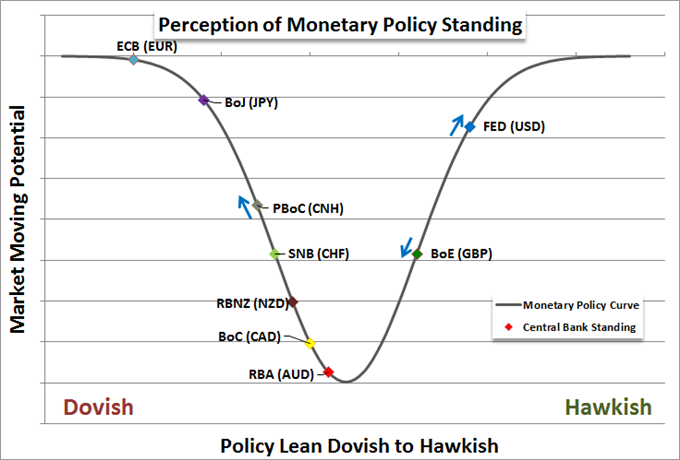 Just two months ago, the possibility of a Fed rate hike before the end of the year seemed incomprehensible to the market rank. Today, it seems the most likely outcome. A theme of divergent monetary policy trends has proven among the most productive drivers for exchange rates over the past months and years (see the discussion of US Dollar response to the Fed below). As the discrepancies grow ever larger – while at the same time the boundaries of some extremes become visible – this catalyst will become even more important for dictating trend and volatility. And, leading the way, will be the Federal Reserve and the US Dollar.

At the onset of the Great Financial Crisis and Great Recession that infected the world in 2007/2008, the US central bank proved one of the earliest and most impressive financial firefighters to douse the panic. After cutting rates to zero, it became one of the earliest adopters of the large scale asset programs (QE) that is now seen as commonplace for dovish central banks. That leadership in global monetary policy is once again arising in the form of its intention to ‘normalize’ (or lift rates to return to a level deemed normal).

From the FX market, the disparity in monetary policy is a key fundamental driver. It may seem a minor consideration given rates are at or near record lows for much the world, but valuation in exchange rates is inevitably relative. Therefore, the promise of even a 25 basis point increase offers dramatic contrast to counterparts that are employing open-ended stimulus programs, cutting rates or even holding neutral. As can be seen in the graph below, the Fed – and thereby the Dollar – is in a unique position. The mere anticipation alone has already translated into significant gains in the currency’s favor.

The deeper, market implications behind the Fed’s march into the twilight of interest rate hikes is that it will alter the outlook for global monetary policy. It didn’t take long for the world to follow the US authorities’ lead of extreme accommodation, and it is unlikely to take long in the opposite direction – though it certainly isn’t motivated by the same degree of panic. Below we can see what influence the rise of global central bank support has had on investor sentiment. A rise in stimulus was seen as a transfer of risk from market participants’ shoulders to that of the policy authorities. 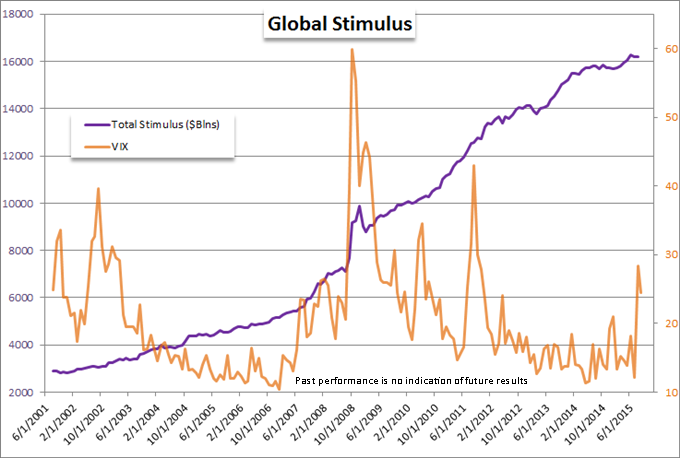 When market participants perceive that their risks have been mitigated, they are encouraged to adopt greater exposure both in nominal terms as well as in the concentration of risk in their portfolios. This in turn means assets like US equities have done very well in the past six years. Yet, just as this has provided lift, the change in winds can prove a destructive force for exaggerated confidence. 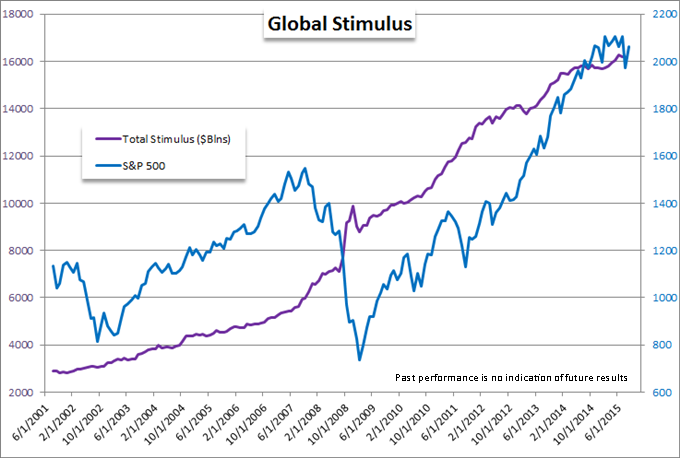 It is clear from market activity these past weeks, months and years that the anticipation of the inevitable shift away from constant escalation in extracurricular support is bleeding into positioning. From the USDollar below, we have seen years of advance punctuated by the remarkable 9 consecutive month advance through March. Yet, as of late, the currency has found a temporary plateau as speculators weigh out how much premium and capital repositioning this first mover status deserves. 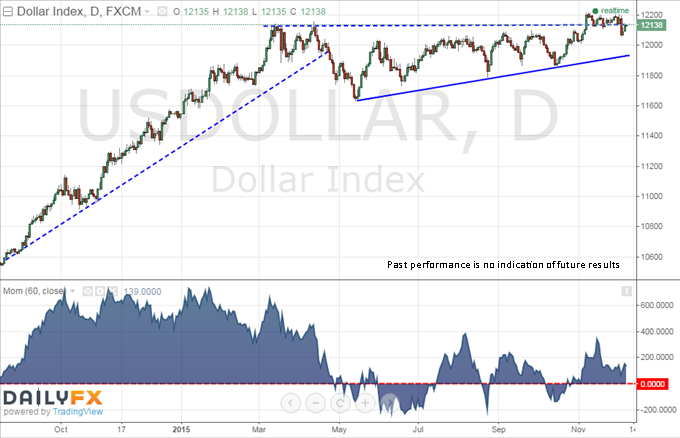 We have certainly not seen a full scale de-escalation in risky assets in advance of the FOMC’s actual decision to start pulling back the reins, but we can see the influence well enough. Below we have a weekly chart of the S&P 500 (a benchmark for investor confidence) versus the rate of change in the central bank’s balance sheet. As the central bank increased their balance sheet – or in anticipation of it – equities rose. Yet, when it leveled out, the market’s lift evaporated. A hike would represent the opposition influence. 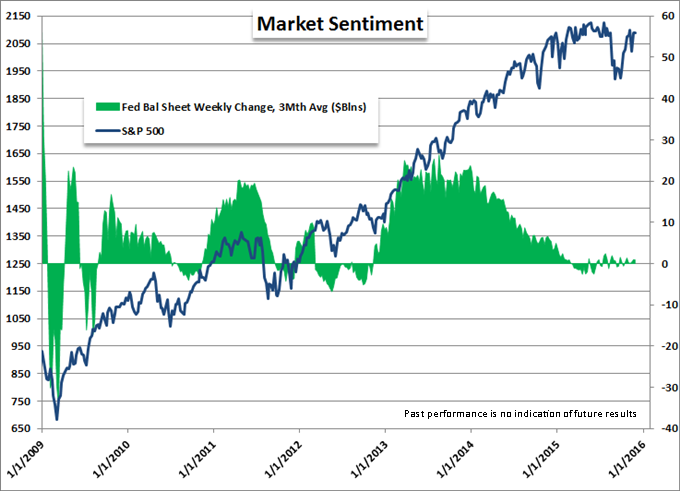 This transition stretched beyond just the closed system of strict financial prices. Real world market influence will soon follow in the form of growth, business cycle and commodity prices. One notable mention for its anticipatory qualities is Gold. As rate forecasts rose in the US (illustrated below with 2-year Treasury yields), the value of the metal dropped. That is because the commodity was used as an alternative to traditional fiat currencies undermined by easy policy. But a rise in market rates has shown gold a poor substitute. 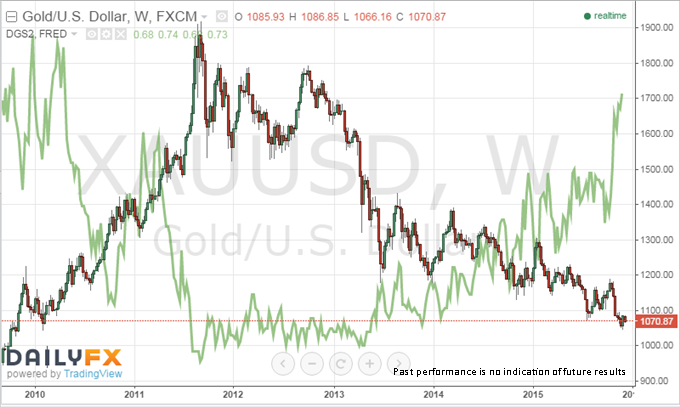 While there is good debate to be had on the more nuanced points of economic health, financial stability and the suitability of reversing years of accommodation by the world’s largest central bank; the general conditions laid out by the Fed themselves have generally been met. The central bank has a dual mandate of steady inflation (considered a 2 percent target) and naturally low unemployment (variable given conditions). The jobless rate has dropped to 5.0 percent. And while, headline inflation is just around zero, core inflation is closer to target and the Fed makes it a point to warn they must work in anticipation. 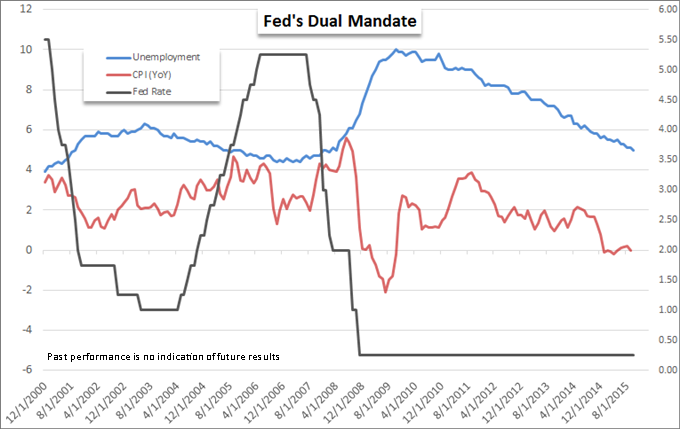 With the December 16th (Wednesday) rate decision, the Federal Reserve can decide to start withdrawing accommodation or not. However, it is not a simple as a rate hike or no rate hike. There are a number of outlets for which policy views can be altered including through their most frequently used avenue – communication. Below is the different facets of this event to watch, the probability of its outcome and the market impact. 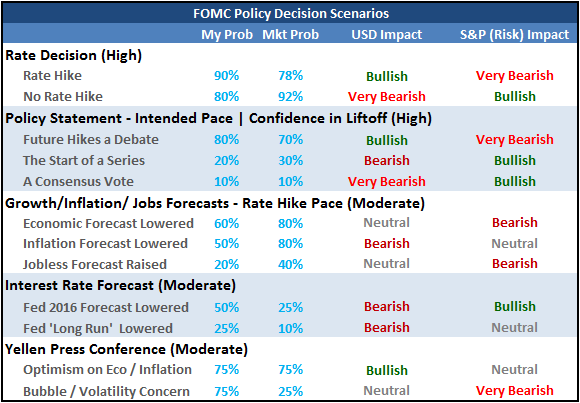 A distinct complicating factor in how the Fed decision will impact the Dollar, equities and other financial markets is the market’s anticipation. Fed Fund futures (a product used to hedge expected changes in benchmark rates) offers the most robust forecast for a rate hike at 79 percent seen in years. There is still a stronger bias in certain other market corners like the US Dollar. Merely meeting expectations of a hike may not carry that strong a response given this view. Subsequent moves and the implementation compared to counterparts thereby becomes more indicative of future moves. 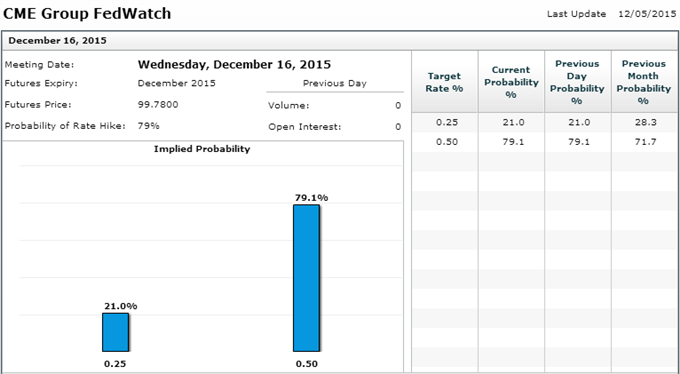 A further distortion that can make this impending event risk all the more dangerous is the conditions that have formed in the lead up to this historic event. We have seen a systemic complacency spread over the markets through aggressive risk exposure and assumption of low volatility circumstances. This is further exacerbated by seasonal conditions. Historically, December is a low volume month with hearty returns for risky-oriented assets. That sets a precedence that moral hazard can make all the more extreme. 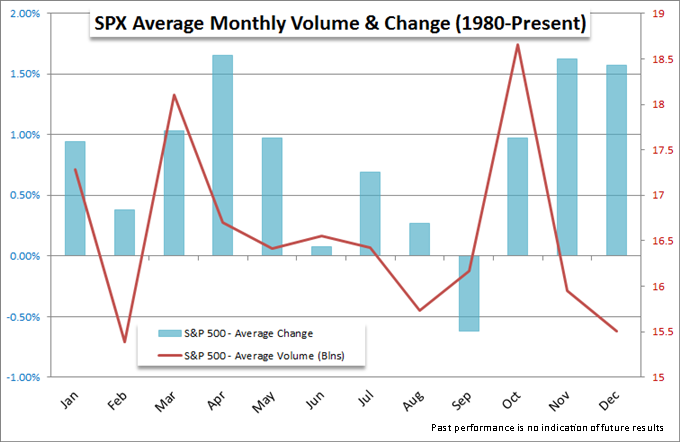 Thin trading will be further intensified by the assumptions of volatility. The VIX volatility index historically also passes December in a quieter range. It is the combination of thin trading and unexpectedly high volatility that translates into severe liquidity risks. There are few things more disruptive and distructive to financial activity. Traders are advised to take precautions appropriately, as detailed here: "Three Factors Warn of Perfect Storm in FX Markets - Caution Advised". 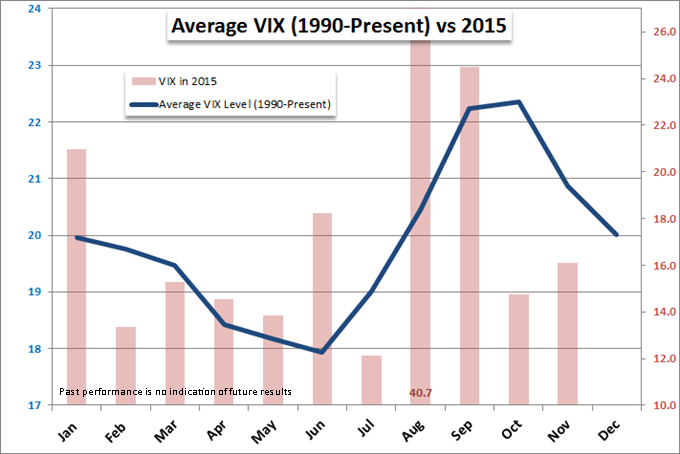 Another wrinkle complicating the market’s reaction to the Fed rate decision is the unexpected response to this past week’s ECB (European Central Bank) push for more accommodation. The group announced an extension of its open-ended QE program and widened the range of assets that they could invest in. Yet, despite representing a definitive upgrade, the move was seen as ‘smaller’ than what the market had anticipated. In turn, the Euro (EURUSD below) actually rallied. The market will be far more sensitive to what the consensus is heading into the FOMC meeting and how easy it would be for the group not to live up to expectations. 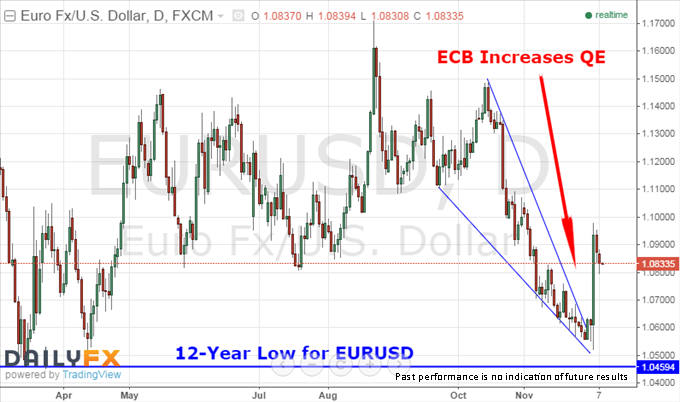