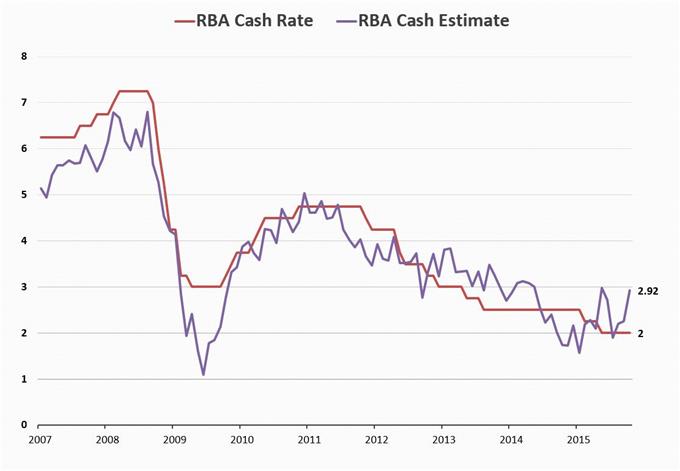 Why The Australian Dollar Is Beating the GBP and Euro

Trading in the Australian Dollar has materially changed over the last two weeks and the primary reason for this is quite simple: the unemployment rate has dropped from 6.2% to 5.9%.

This has so far helped the Australian Dollar gain 167 points vs. the USD, 613 vs. the GBP and 524 vs. the Euro. The change in unemployment was so great that my RBA Cash Rate model now expects rate increases of 92 bps. I personally don’t see any rate increases at this time, and as we can see in the chart below, the model itself is too blunt to give an exact reading as to where rates should be. It does however provide for a better reading on the general direction of the RBA cash rate.

On the back of better than expected employment statistics, proposed rate cuts would appear less likely and I would also expect the AUD to gain further vs. the Euro and GBP.

According to overnight index swaps, the market is currently pricing in rate cuts of 20bps over the next 12 months. I expect this to turn more neutral at the next unemployment rate reading on December 12 if the reading remains near 5.9%. At this stage economists would also be more comfortable revising their outlooks.

On the other hand the interest rate market has already acted by lifting swap yields in favor of the Aussie dollar and FX traders have bought Aussie Dollar vs. the Euro and GBP. I expect to see more of the same in the weeks ahead. Also worth noting is that on the back of the unemployment reading two weeks ago, I turned bearish EURAUD, see here and here.

The biggest risk right now stems from potential dovish comments by the RBA at their rate meeting on Tuesday next week and whether or not the AUD reconnects with commodity market prices.

What Are The Chances That The Unemployment Rate Will Stay The Same?

The ANZ job advertisement growth data is positive and supports a lower unemployment rate. The Australian Terms of Trades are not improving and should act as a drag, while employment growth is looking good.

This again implies that the latest reading may not be a unique improvement. 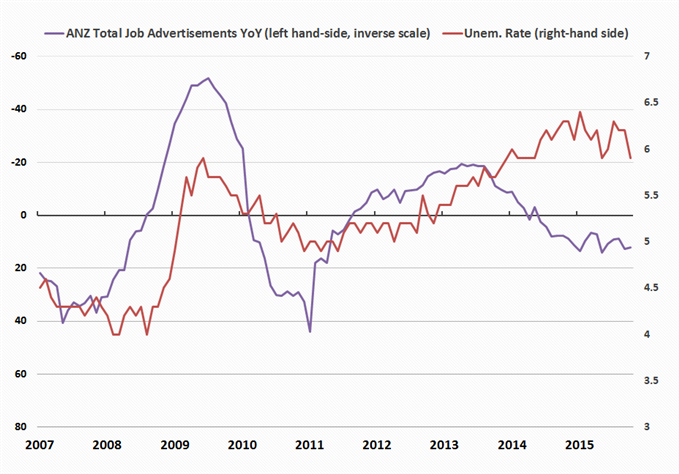 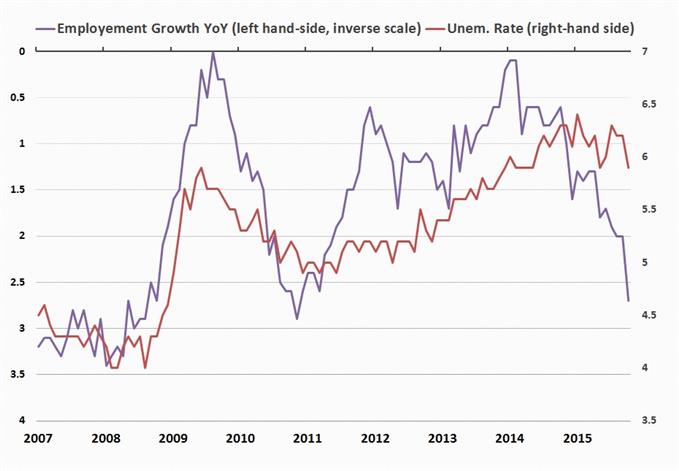 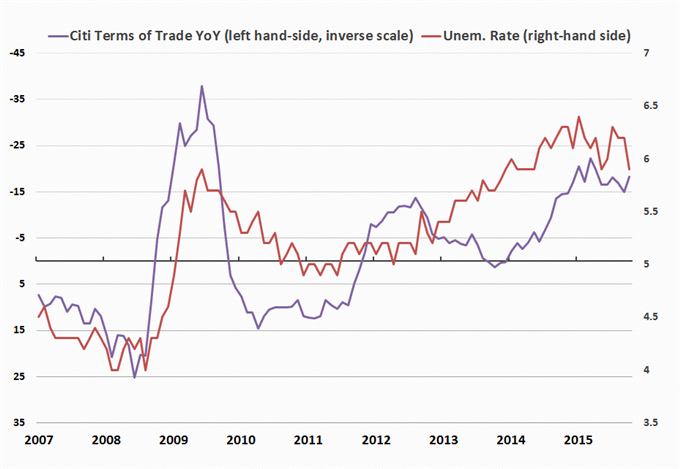 What are other key drivers saying about the AUD?

Key drivers such as commodity prices and long-term relative interest rates are still gloomy and the same fair value model we used in 2014 to predict a decline from 0.9270 to 0.8350 for the AUDUSD is now predicting that the AUDUSD should be trading at 0.63 (currently at 0.7230). However, there has been a disconnect between commodity prices and the AUD as of late.

The outlook for the commodity sector is also not expected to improve any time soon, with China under pressure. This can very much be attributed to the fact that the number one exported product (iron ore) via the world’s top three iron ore producers (Vale, Rio Tinto, and BHP) has seen continued output despite iron ore prices trading at decade low levels. They are all fighting for market share as we have seen in the crude oil markets and if a forecast were only to rest on commodities, I would be bearish.

Why bearish the Euro and Pound Sterling and not vs. the U.S. Dollar?

It should at this stage come as no surprise to anyone that the ECB are terrified of the low inflation, and that they are prepared to cut rates further in an attempt to boost E.U. inflation. With this in mind, most can agree that until inflation picks up there is no need to expect the Euro to strengthen.

In the case of the BoE, hopes have been high, but as early as last year we see the BoE scaling back its expectations of a rate hike. Here as well, it’s the lack of inflationary pressure which is keeping the Bank of England at bay. BoE comments earlier this week point to a central bank that is in no rush to hike rates.