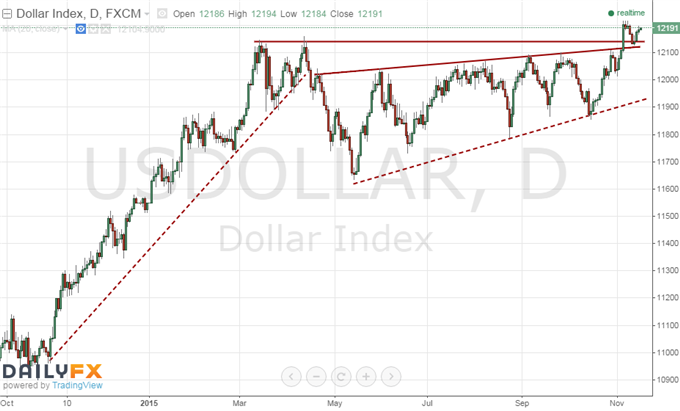 Traders Not as Confident of Fed Hike as Markets, Economists

Usually, the final six weeks of the trading year is a period that slowly grinds down to a quiet range. That isn’t the case for the Dollar into 2015’s close however as speculation of an impending Fed rate hike swells despite liquidity. Now, a more interesting question is starting to arise: can the USDollar continue to climb after breaking to a 12-year high considering the outlook of a key fundamental theme is already so favorably price?

Before weighing in on the next phase of fundamental speculation, it is first important to understand how far the Dollar has come and the significant boundaries already crossed. As can be seen below in the Dow Jones FXCM Dollar Index chart, a strong upswing and acute acceleration a little over a week ago brought the benchmark to – and subsequently broke through – the 12 year highs set earlier in the year. The charge began with the Fed’s adamance that a hike was still on the menu for the near future. The break was the result of the impressive October labor report that showed a strong beat in NFPs, a further drop in unemployment metrics and crucial multi-year high in average wage data.

Yet technical and fundamental progress does not ensure subsequent conviction or follow through. In fact, after the significant swell in conviction behind one of the most important fundamental themes in the FX market; the currency may face difficulty in marking further progress. In industry parlance, “a rate hike from the Fed may already be discounted.” Has the Fed’s uniquely hawkish bearing already been fully priced in and therefore the leaves the Greenback out of fuel? Or is there more in the tank? 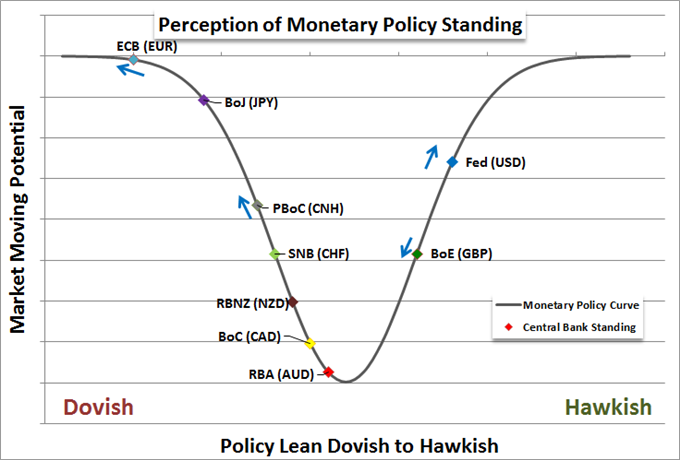 Much of the recent hawkish swell in the financial markets – and the subsequent rally from the Dollar – this past month can be tracked through the ‘market’ view assessed in the Fed Funds futures. This financial product is intended to offer a hedge to expected interest rate changes which can have a profound impact on assets whose price/value is derived from this baseline rate. As can be seen in the ‘FedWatch’ from the CME, the probability that December would see the first 25 basis point hike since 2006 rose from 6 percent a month ago to 68 percent as of this past session. That is an astounding upgrade. Where this hedging instrument shows serious repricing, it generally is playing catch up to existing-hawkish expectations from other forecasting groups. According to Reuters survey of Primary Dealers (those firms that are charged with dealing in government securities directly with the government), 15 of 17 participants said they expected a rate hike next month. That 88 percent figure was more modest a month ago, but it was certainly not follow the level of skepticism that was seen in the Fed Funds futures.

Economists have similarly held out a hawkish anticipation that has similarly intensified after the October FOMC and labor statistics. Currently, Bloomberg’s collective survey shows that the more academically-inclined group is offers 81 percent (58 of 72) forecasting a 25 basis point hike, 17 percent (12) seeing no change and 3 percent (2) anticipating a tightening that is a fraction of the standard quarter percent.

What Are Traders Anticipating

While Fed Funds futures reflect a segment of the market rank, retail traders fall a little further into the speculative column. That also seems to insinuate a stronger sense of skepticism for what has been many many years to come to fruition.

Taking a poll of traders on Twitter on whether the Fed is prepared to lift rates next month, the more than 300 tally shows that 52 percent expect a 25 bp liftoff and 48 percent believe that the policy group will have to keep its bearing once again. That is close to 50/50. That is a consider split in view. If the deeper grain of doubt proves fortuitous, more traders will have found themselves well position for skepticism. Alternatively, this also provides the fuel for further gains on the Dollar’s part if the march towards a hike becomes clearer. Those that are neutral or bearish the Greenback will be mobilized to the changing tide and feed momentum. Positioning further reinforces the results of the poll. Using the Speculative Sentiment Index (SSI) data from FXCM that shows how retail FX traders are positoined on the Dollar-based pairs, we see a lack of enthusiasm for that medium-term event risk and even a mixed view depending on the currency pair.

Retail traders are net long EURUSD and net short USDCAD in meaningful size which puts them against the Dollar’s bullish view. That is particularly remarkable given the comparatively dovish views for the Euro and Canadian Dollar. Most other majors are close to neutral.

This can be an indication of multiple factors including the shorter duration of the average retail FX traders’ positions, but it nevertheless indicates this is not a fundamental theme that is fully accounted for and therefore can provide more leverage to the Dollar…either bullish or bearish. 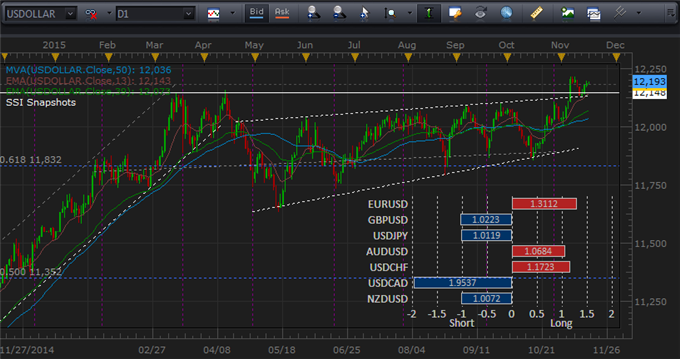