For the past seven months, the Dollar has consolidated following an incredible climb. The indecision matches the market’s tempered belief that the Fed was barreling towards an inevitable rate hike that sets the central bank on pace to dramatically reverse the accommodation of the past six years. Expectations have grown more balanced for the FOMC’s plans, but liftoff no doubt approaches.

Speculators are absorbing every scrap of evidence shaping the probabilities that the move can be moved forward or backward. Not all measures are equal in their influence on speculation, but the monthly US labor report certainly is at the top of the list of data that can change the winds. With the USDollar and S&P 500 indexes standing just below their respective highs (one a 12-year the other a record), the pressure all the more intense.

In the clamor of the 13:30 GMT data release, the market’s first look will go to the media-favorite nonfarm payrolls (NFPs). An ease of interpretation, big number and years of speculative filtering makes the figure the most recognizable of the listings. The attention afforded this particular statistic will lend it greater influence over initial volatility. Should the print deviate far from the 184,000 net job increase forecasted, the first reaction will be volatile. From a poll conducted Thursday, 62% of traders expect the report to best expectations and the balance expect a weak report.

While the ‘flash’ of the report will go to the payrolls, the true heft of the data to develop trend will fall to other statistics. A cut deeper, the Fed’s dual mandate for deciding monetary policy is reaching full (natural) employment and stable inflation. The unemployment rate has trended lower from the recession swell for nearly six years. The forecasted 5.0 percent read (an expected 0.1 percentage point improvement over the September reading) would be a pre-crisis low, but it doesn’t change the scales significantly. Nor would an uptick for that matter. And, while the debate over the legitimacy of the unemployment reading is a lively one, that is for economists and those that want to philosophize theory. Traders should be concerned with the market’s reaction. 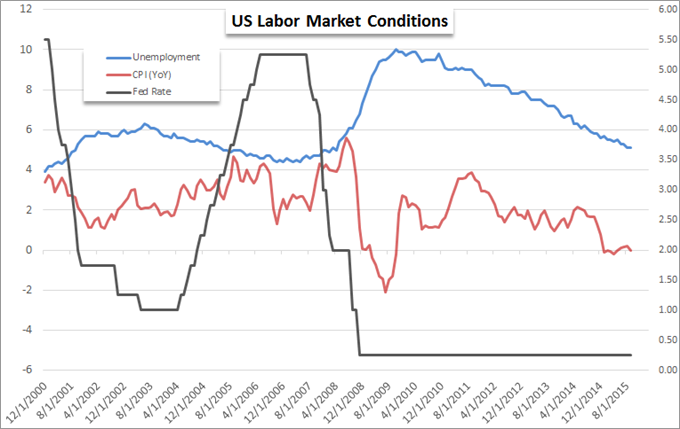 In the Fed’s monetary policy mix, jobs are not the lacking facet of the normalization step. The timing of the policy authority’s first hike – and the pace thereafter – relies more distinctly on inflation. Yet, that doesn’t write this data off in terms of market potential. In fact, this dense round of data from the Bureau of Labor Statistics includes one of the more important price gauges in the market: wage growth. Wage growth is a ‘virtuous’ inflation, and its swell can motivate the Fed long before headline CPI or PCE indicators cross the 2.0 percent threshold. Wage growth has stagnated, but that makes price action all the more sensitive to any change that may arise. 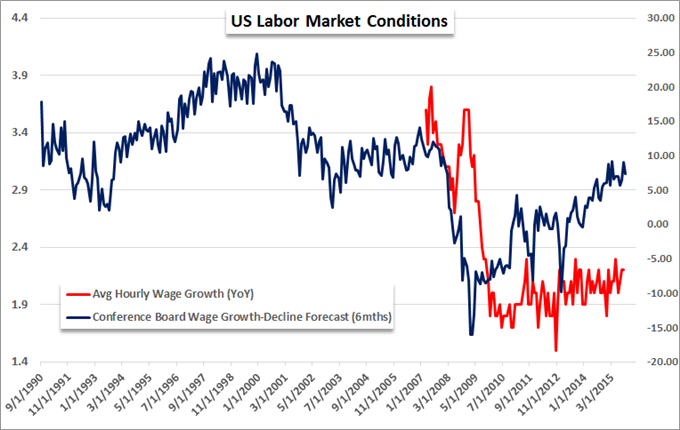 Heading into this important data release, we have seen the market’s expectations/fear of an impending tightening move rise quickly. Below, the forward curve of the Fed Funds futures timing give scope to the abrupt change in sentiment. This both leverages the market’s sensitivity to this type of data and perhaps sets the bar high. 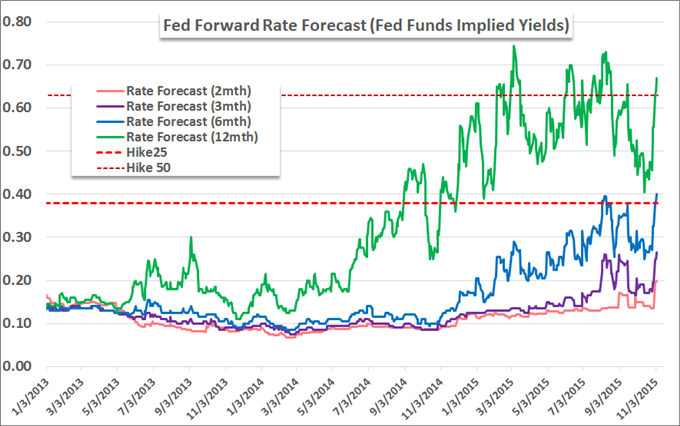 With the focus and stakes in mind, we should consider the Dollar’s exposure and scenarios. From the second poll I conducted, 57% of those traders that responded believe the data will rally the currency enough that the index overtakes 12-year highs.

The view for the Greenback to rally fits the expectations for a better-than-expected print from the payrolls. Improved labor conditions – whether just jobs or wages as well – will bolster rate expectations and thereby give the currency lift. However, the lift this currency needs at such a precipice is significant. A NFPs beat alone may not motivate a break or a break with follow through. A true launch is best served by an upgrade in the wage data. If the data uniformly disappoints, it can lead to quick slump, but it is unlikely to turn the Fed off the path of a hike – just delay it – so a lasting trend reversal is less likely.

Looking at traders’ positioning using the SSI Snapshot, we find a mix of Dollar exposure with considerable skew. Some of the most liquid majors (EURUSD, GBPUSD and AUDUSD) show a sizable net-short bias on the Greenback. 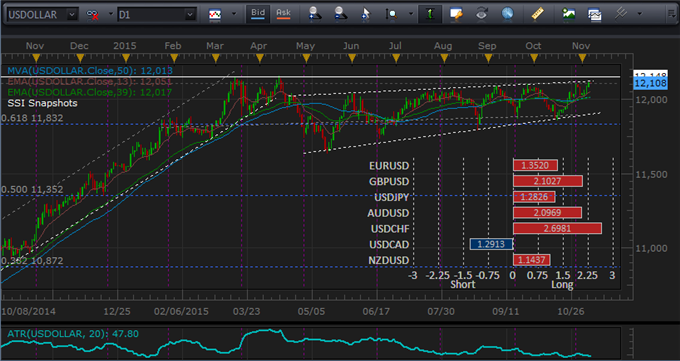 It is relative easy to trace the connection between employment statistics and the Dollar’s heading. However, this same fundamental string of jobs data to Fed timing extends to ‘risk appetite’ as well. Sentiment has been exhaustively shaped by monetary policy over the years. Growth, stability and investor appetite can all trace back to some extent to the support offered by the Federal Reserve and other central banks around the world. The risks is that their presence and sustenance have become a critical pillar for one or all three. In particular, if speculative exposure is a byproduct of extreme accommodation, its moderation can trigger a rebalancing that leads to a lasting decline.

A logical mirror of the expectations for NFPs beat/miss and the Dollar response, the poll for S&P 500 response shows 59% of respondents believe the index will break its record high.

There is a dichotomy to the equity and capital markets’ response to the labor data. A ‘weak’ report may offer evidence that the Fed will have to push back its liftoff and thereby provide speculators a little more time to access extremely cheap funds. However, it also means the economy is weakening. Alternatively, a ‘strong’ reading may speak well of the economy but it will give serious backing to recently revived speculation for a near-term rate hike. Below, we see that the release of the monthly labor report has aligned to a number of big S&P 500 changes in trend. 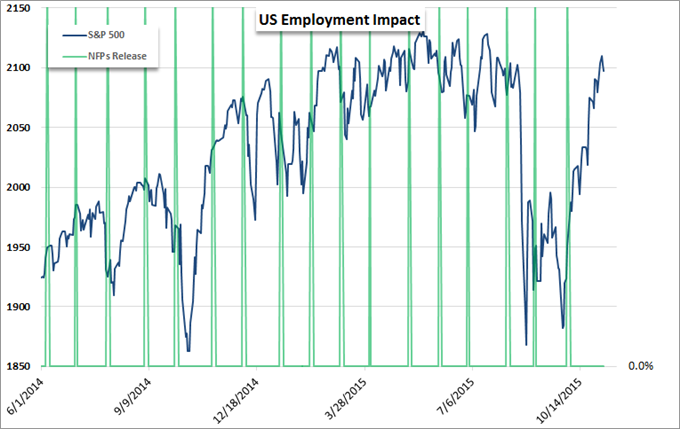 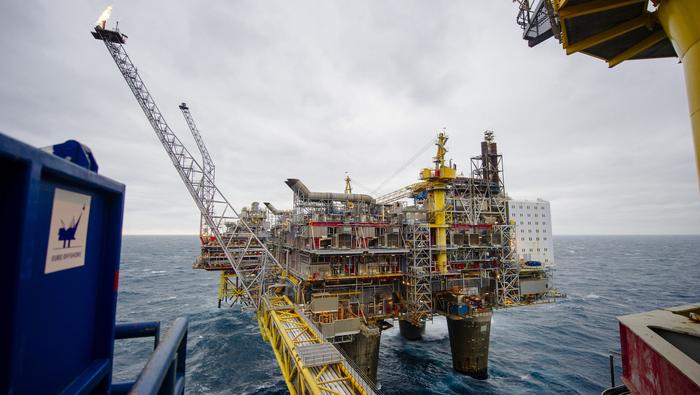 How To Trade Natural Gas
Advertisement