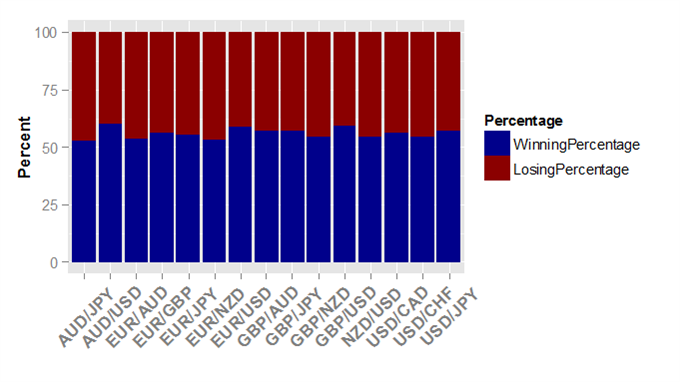 What Can Separate Successful Traders from the Rest?

What separates many successful traders from those unsuccessful? To find out, we studied over 43 million real trades and published our Traits of Successful Traders series six months ago. Since then we’ve collected another six months of data and nearly 30 million trades since original publication.

How have the lessons stood the test of time?

What Separates the Successful Traders, and why do Most Traders Lose Money?

We re-examine the same theme with trading data in the past six months to see if the same pattern held. Obviously we would love to claim that our research and findings materially changed the behavior. Unfortunately there is no clear evidence to support this, and indeed we’re reminded of the same lessons.

First we highlight a fact that may surprise you: the average retail FX trader captures profits on their trades more than 50% of the time.

For example, the Euro saw an impressive 59% of all trades closed out at a gain. And indeed every single one of these instruments saw the majority of traders turned a profit more than 50 percent of the time.

If traders were right more than half of the time, why did most lose money? 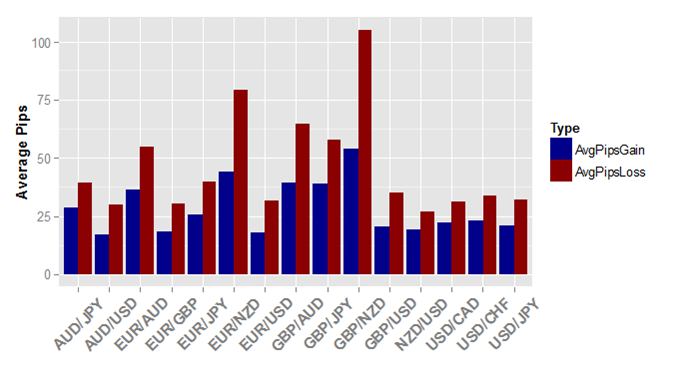 Let’s use EUR/USD as an example. We see that EUR/USD trades were closed out at a profit 59% of the time, but the average losing trade was worth 32 pips while the average winner was only 18 pips. It is worth noting that these figures are fairly significantly changed from what we saw in our last study, but the ratios remained nearly the same. The average trader lost nearly 80% more on their losing trades than they gained on their winners.

The results are even worse in the volatile GBP/NZD pair: traders captured profitable trades 54% of the time with an average pip value of 54 pips. Unfortunately the average loss was nearly double that value at a sizable 105 pips.

What gives? Identifying that there is a problem is important in itself, but we’ll need to understand the reasons behind it in order to look for a solution.

Cut Losses, Let Profits Run – Why is this So Difficult to Do?

In our data we saw that traders were very good at identifying profitable trading opportunities over 50 percent of the time, but ultimately they lost as the average loss far outweighed the gain. We discussed a clear reason for this in our original Traits of Successful Traders Series: human psychology.

It should surprise no one that we would advocate a very simple rule: cut your losses early and let your profits run. This point is so obvious to be banal—do less of what is bad and more of what it is good.

Yet it’s likewise clear that traders continued falling into the same trap through the past six months. Let’s take a closer look at why this simple rule can be so complicated.

Why is it So Difficult to Practice Good Money Management?

Why is good money management so difficult? Human nature.

As we noted in our original study, this is not at all limited to trading. We’ll draw on the work of a Nobel-prize-winning psychologist to help us understand a key shortfall in how humans treat gains and losses.

A Simple Wager – Understanding Human Behavior Towards Winning and Losing

Most people will pick Choice B despite the fact that their expected gain will be less than that of choice A. This suggests that people would rather capture a sure-fire gain than make more money. If I only offered this gamble once this might make sense—why risk ‘losing’ $450? But if you’re regularly presented with this choice the rational decision would clearly be Choice A. How about losses?

We flip the wager and now losses are guaranteed, but the severity of those losses will vary. With Choice A you now have a 50% chance to lose $1,000 and 50% of 0 losses—over time you can expect to lose $500. Choice B offers certainty of a lesser $450 penalty. Choice B is clearly the more rational decision—particularly if this wager is played over and over again. But most will actually choose A. What gives?

Most people avoid risk when it comes to taking profits but then actively seek it if it means avoiding a loss.

Nobel prize-winning clinical psychologist Daniel Kahneman developed Prospect Theoryas an attempt to model how people make decisions. It wasn’t geared towards trading per se, but we’ll see that it has obvious implications for the trader.

The findings showed something remarkably simple yet profound:most people took more pain from losses than pleasure from gains.

It feels “good enough” to make $450 versus $500, but accepting a $500 loss hurts too much and many are willing to gamble that the trade turns around. This makes no rational sense: a $500 loss will more than offset a $450 gain but the reverse is not true.

Why should we then act so differently?

Let’s imagine that we can measure total Pain and Pleasure on an absolute scale, and let’s compare that to trading wins and losses.

To a perfectly rational actor, it might make sense that a $500 gain would give enough Pleasure to completely offset a $500 loss. Yet clinical studies will show that this is not the case, and indeed the chart below models this relationship and why it might be problematic. 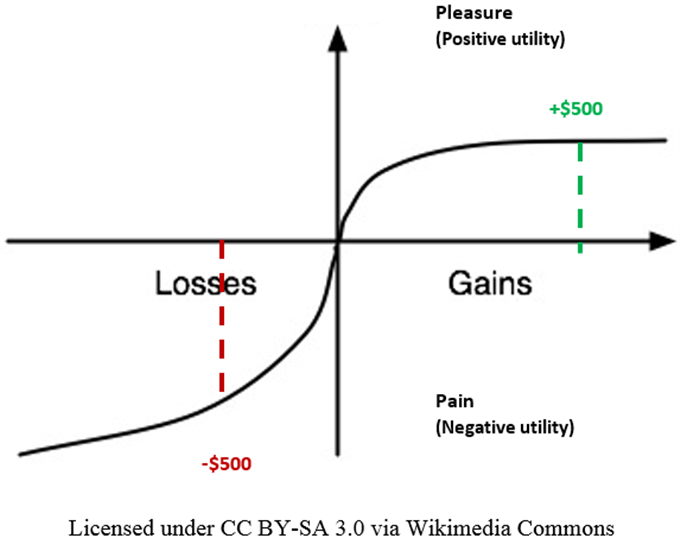 Again we have to emphasize that this makes little sense for the rational trader: you shouldn’t have to make at least $1,000 to offset the psychological harm of a $500 loss.

And yet this is what we see in real trader behavior. We as humans will avoid losing at all costs: we will allow an unprofitable position to remain open while closing out a winner at a more modest gain. Our data shows why this can ultimately force traders to lose money.

Plan to Avoid the Common Pitfall

Humans are not robots, and no amount of rationalization is likely to erase the effects of real cognitive biases for most people. But traders aren’t most people—a person opens a trade account in an attempt to gain. If all-too-common behavior will result in losses, that trader should take steps to avoid them and ultimately avoid wasting his or her time and hard-earned capital.

If extreme loss aversion and relative indifference to gains is the problem, the solution is straightforward: treat losses as equivalent on a 1:1 basis with gains. From the start of any trading decision, know that you stand to gain at least as much as you stand to lose.

In trading terms this is called having a “reward/risk ratio” of at least 1 to 1. This simple rule could allow you to ultimately make money in trading if you turn profits on at least 50% of your trades.

The concept is so obvious that you might feel let down after reading this far into the article. But it is obvious because it likewise rings true in trading.

Our data certainly leads us to believe that it does. We used our anonymous trader data to profile over 93,000 real trading accounts which places at least 2 trades in our top 15 currency pairs. We then categorized those trading accounts by average Reward to Risk ratio in those trades and determined whether they turned a profit.

Our data shows that 52 percent of all accounts which operated on at least a 1:1 Reward to Risk ratio turned a net-profit in our 6-month sample period. Those under 1:1? A mere 20 percent. This is nearly unchanged from the same study conducted in the 12 months before.

Traders who adhered to this rule over 2.5 times more likely to turn a profit over the course of these 6 months—a substantial difference. 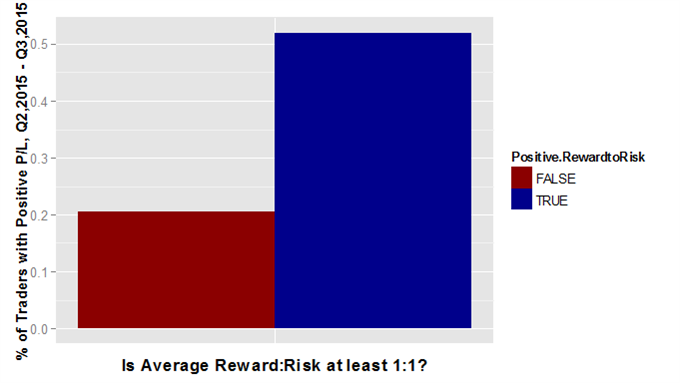 Game Plan: Which Techniques Can I Use to Avoid this Common Mistake?

Our data shows that the average trader is far too eager to take small gains in winning trades and allows losses to grow substantially larger. This is not rational behavior if the aim is to ultimately turn a profit in trading.

Make sure your profit target is at least as large as your maximum loss on any given trade.

And just as critically—establish a maximum loss via a Stop Loss order from the outset. You can certainly set your price target larger than your stop loss, and you should aim for at least 1:1 regardless of strategy. Our data suggests this can have a significant impact on whether or not a trader ultimately turns a profit.

We will use this as a basis for further study on real trader behavior as we look to uncover the traits of successful traders.

Once you have a trading plan that uses at least a 1:1 Reward to Risk ratio, the next challenge is to stick to the plan. Remember that you have to fight human tendencies towards strong Loss Aversion every step of the way. It becomes more difficult to ignore emotions when there’s a sense of ownership in a trade: set up your trade with maximum loss and profit targets from the beginning—before you even place that trade.

Once those stops and limits are set, don’t touch them except to move them in your favor. There are countless stories (and hard data) to show the dangers of moving a stop order to accommodate a bigger loss.

Managing your risk in this way is a part of what many traders call “money management”. Without proper money management even the absolute best strategy stands a substantially diminished chance of ultimately turning a profit.

Can you turn a profit using a strategy that uses a reward to risk ratio below 1:1? Certainly—it’s a question of probability and expected outcomes. Yet our data shows the simple fact that most who use an inferior reward to risk profile are substantially less likely to ultimately turn a profit.

By that same token, 1:1 is a bare minimum; certain lower-probability strategies benefit from Reward to Risk ratio of 2:1, 3:1, and so on.

We will discuss different trading techniques in further detail in subsequent installments of this series.

This article is an update of our Traits of Successful Traders series. Earlier this year we studied over 43 million trades placed via a major FX broker over the course of 12 months. Through this we sought to answer a simple question: “What separates successful traders from unsuccessful traders?”

We take a look at over 29 million real trades placed in the six months that followed in order to see whether changing market conditions has affected our conclusions. The short answer is a resounding “no”.

Through this guide we hope to establish some of the “best practices” that successful traders follow, such as the best time of day, appropriate use of leverage, the best currency pairs, and more. Stay tuned for further updates on the Traits of Successful Series.