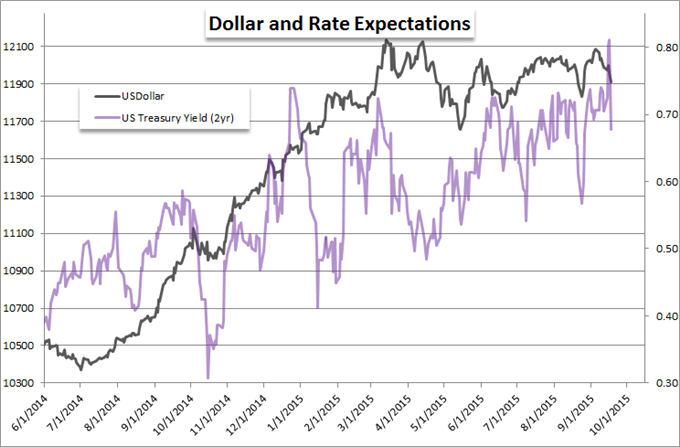 While the Federal Reserve’s vote to keep rates unchanged at the range of 0.00 to 0.25 percent, there was still speculative adjustments that needed to be made in the market. Federal Fund futures showed a strong expectation for a hold, but there was still approximately a 16 percent probability that they could have lifted for the first time in nine years. Thereby, the immediate response from the market to the news would see the expected results: the Dollar dropped sharply while assets more attuned to ‘risk appetite’ (like US equities) rose. However, the short-term impact may not carry through as we are no longer dealing with a market so easily placated by underwhelming support.

Following the decision in June to hold policy on account of softening economic data and a persistently stagnate level of inflation, the market had shifted its expectations for the Fed’s long-warned shift to ‘normalize’ to a September 18 launch. The reason being, that particular event offered enough time to see data update and it was the quarterly event that offered more insight to explain any meaningful changes.

Yet, heading into this event, expectations of a hike softened. Ultimately, the central bank decided to hold the benchmark range between 0.00 and 0.25 percent in a 9-1 vote (Jeffery Lacker dissented). In the subsequent monetary policy statement, forecasts and Chairwoman press conference, the tone softened; but did not turn the group back from its path to an eventual rate hike. 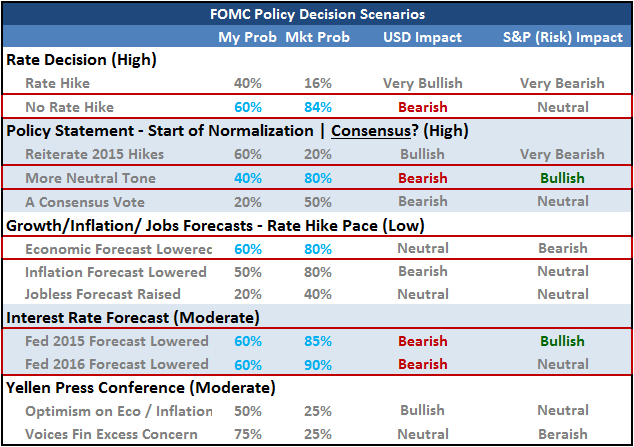 With this meeting crossed off, the next pressing question becomes ‘when will the Fed hike’. Looking to the group’s own forecasts, the expected timing cannot be discerned, but the pace of tightening through the future can be. On that front, we would see yet another downgrade in interest rate expectations. For 2015, they now expect only one standard increase in the benchmark – 25 basis points to a median of 0.375 percent.

The shift in voter expectations between the June update and this most recent round up can be seen below. The dots represent an individual person’s vote, but they do not disclose what official belongs to a given dot. 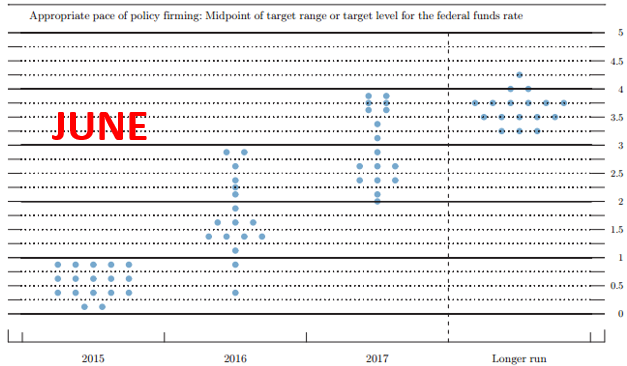 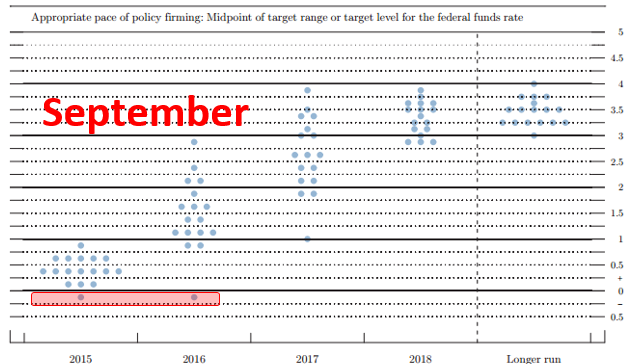 One remarkable point to make in the updated rate forecast distribution is the unusual step for one member to vote for negative interest rates. Where a hold is a neutral policy stance that can lead to either easing or tightening in the future, a negative rate would be a clear escalation of accommodation – and it would be an extreme one. Negative rates are an unorthodox concept and many question its efficacy. However, it is not unusual nowadays as both the ECB and SNB have adopted the concept.

Why the Fed’s Hold Makes Sense

It is not difficult to understand the reasoning for the policy group’s hold on policy. Looking specifically to their stated dual mandate, we find that their benchmarks have not been met. Generally, the Fed targets ‘full employment’ and a sustainable rate of positive inflation. The unemployment rate has long ago hit a number of benchmarks laid out in the past, so that is not the missing factor. Rather, a tepid pace of price growth (below we have CPI but the Fed prefers PCE), offers little motivation to tighten the reigns. 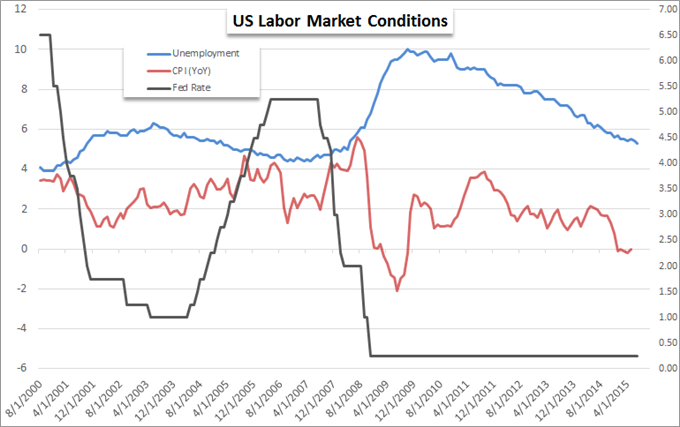 Furthermore, data that has crossed the wires in the weeks leading up to the rate decision showed a significant downturn in health. While it is not enough to warn of an economic stall, it is enough to urge caution in an already cautious group. 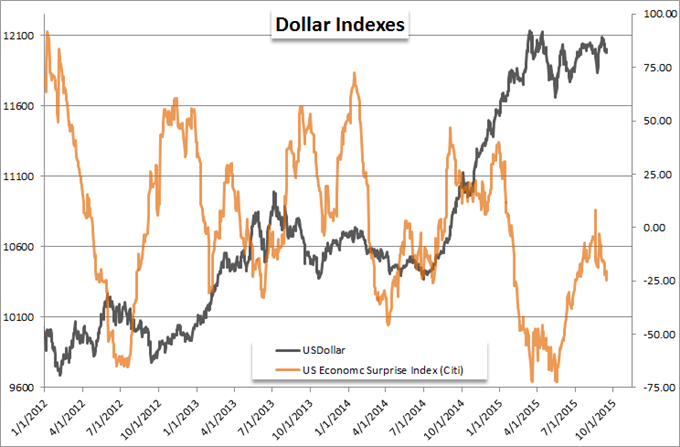 Perhaps the most persuasive – though understated – reason for the Fed’s hesitance to start down its path to returning policy to normal is the recent bout of volatility in the global financial markets. While global factors are not a technical component of their stated mandate, the globalization of economic and financial conditions mean that it must be taken into consideration. Janet Yellen admitted that factors like China’s recent turmoil would be factored in. 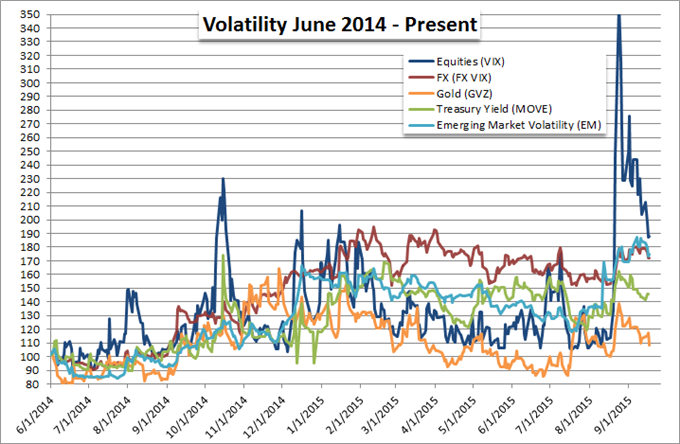 Why the Fed’s Hold is Dangerous

Keeping an exceptionally accommodative policy stance doesn’t just confer benefit. There are detriments to this position as well. From a practical perspective, lower benchmark rates translates into lower returns to be found in the market. That is most prominent felt by savers – who may actually see accounts contract after accounting for inflation – but it is just as real for investors. As a baseline for expected market returns, the below graph shows an aggregate of 10-year government bond yields form the G10. Versus a capital market benchmark like the S&P 500, price and value look to be following very different paths. 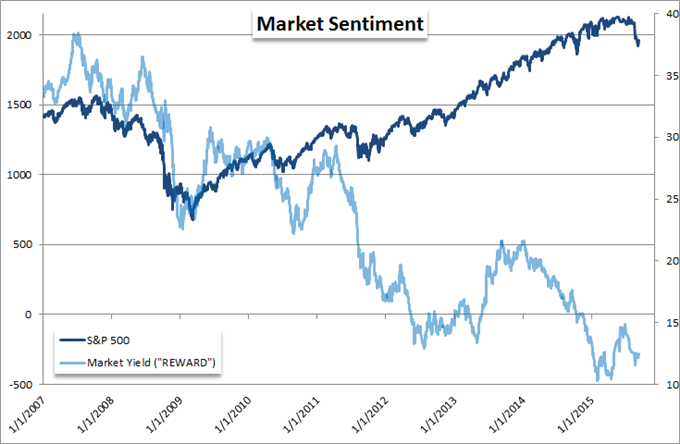 As a side effect of the anemic returns investors have come to expect in the market, we find a need to seek returns elsewhere. When we add to that equation a positive performance from a benchmark like the S&P 500, money manager are put into a position of desperation where they need to mark greater returns than they could normally find in the market to justify their management fees. That drives market participants into riskier assets and into leverage – both in real and thematic terms. 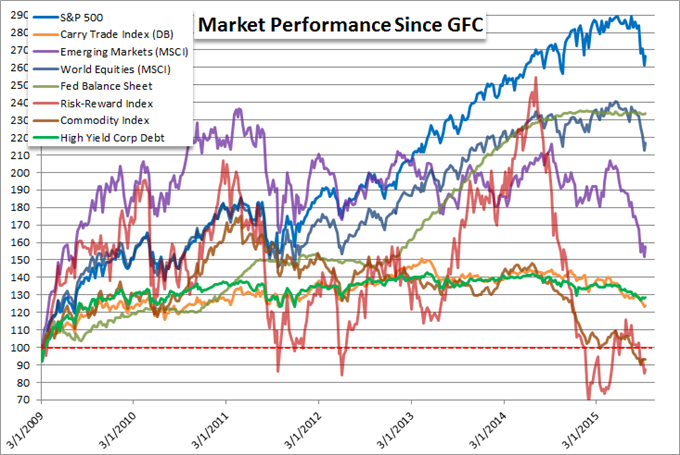 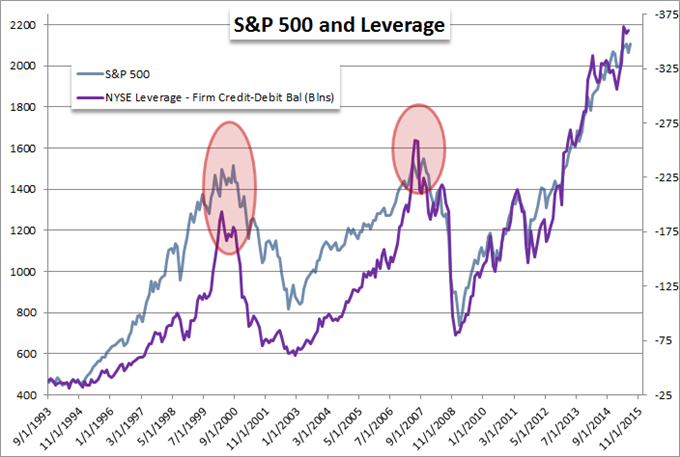 Where Does the Dollar Go From Here?

The initial response from the US Dollar played out exactly as was to be expected. A currency that has generally outperformed the past few years on the anticipation of a first-mover status in monetary policy, there was premium to work off. When it comes to motivating themes, there are few drivers that reach the influence of relative monetary policy.

However, relative monetary policy considerations is perhaps exactly the reason, the Dollar will not loose much ground on this policy hold. When we look at a chart that takes in the bigger picture of the Greenback’s performance, we see the slip, but the long-term bullish bias remains intact.

Fundamentally speaking, the Fed has drained a little bit of the premium the Dollar enjoyed as a leader in the return to policy tightening. Yet, this is just a delay; whereby many other major central banks are in an outright dovish stance. The ECB and BoJ are actively building quantitative easing programs; the PBoC has pursued a variety of unorthodox policies; and the RBNZ, BoC and RBA have all cut rates this year. Perhaps the most qualified currency to take advantage of the Dollar’s softening is the Pound as the Bank of England (BoE) is also looking at a hike in the foreseeable future. 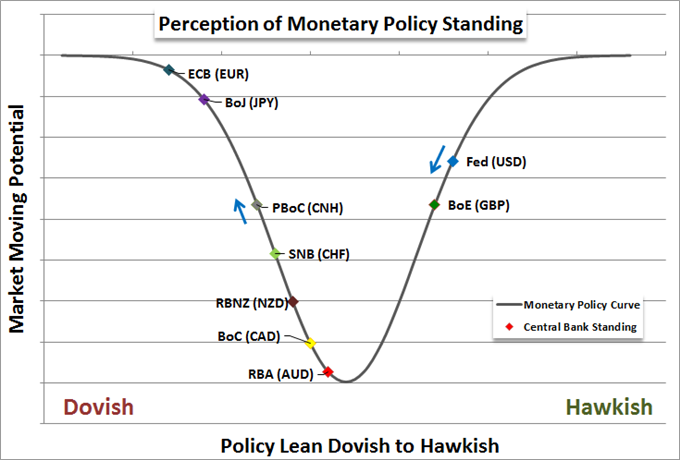 The FX terms of this policy outcome are straightforward – if only complicated by the relative nature of exchange rates. In contrast, capital markets and the financial system’s read on investor sentiment is showing growing signs of trouble. After the Fed hold – which would traditionally be read as an extended period of cheap funds and inspire speculative funds to bid up any and all ‘risk’ trades – we saw the S&P 500 advance and then reverse. The favored ‘fear’ measure in VIX Index showed a similar slip and then rebound.

This no longer seems to be a market whereby a mere hold on policy can inspire a speculative reach. Rather, skepticism is gaining traction and the realization of an inevitable ‘normalization’ to policy which raises the cost of funds and pinches return is seeping into the subconscious. If the S&P 500 and other risk-oriented assets continue to lose ground in the wake of this event, it will meaningfully skew future scenarios to a necessary deleveraging as an end to excess is deemed only a matter of time.