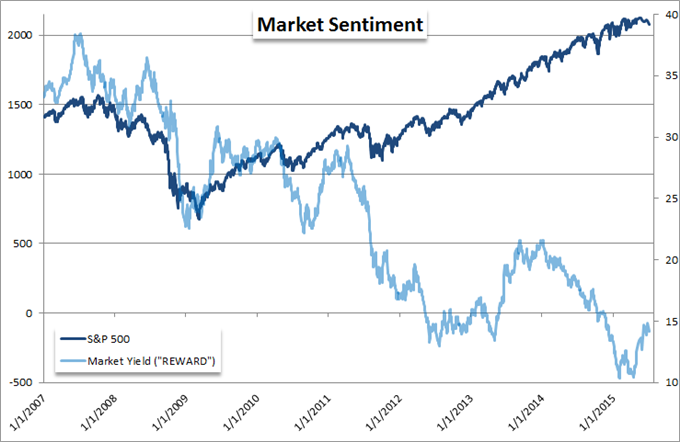 There is an underlying current that connects all regions and asset classes: investor sentiment – or more colloquially referred to as ‘risk appetite’. Like a tide pulled by the moon, the oscillation between greed and fear influenced by something supranatural and reflected through herd mentality.

For the past six years, we have seen confidence generally rise backed by the support of global central banks’ easing efforts, a moderate economic recovery and an explosive appetite for higher returns. The climb will not go on forever, however, as the pillars underlying its drive are unstable: an assumption of nearly no risk, exceptionally low rates of ‘normal’ market return and therefore a growing dependency on leverage.

Mass changes in systemic sentiment levels don’t happen very often; but when they do, there is plenty of opportunity for the investor that is conscious of the early stages of the development. One of the more difficult aspects of tracking such a rare market event – without jumping head first into false dawns – is selecting a good barometer for this regime change. Below, are just a few assets that are considered strong reflections of sentiment. However, my preferred gauge is equities. 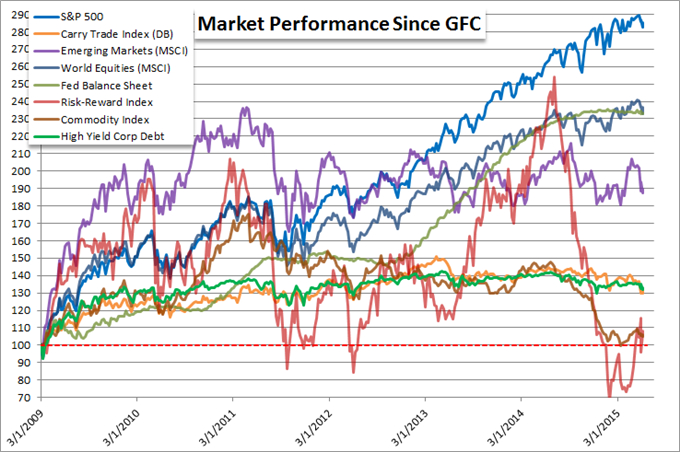 Equities are not a specialty market exposure (like emerging markets or high yield) nor is it concentrated (like stocks with the greatest level of buybacks), but that is exactly what makes it a better overall gauge. As one of the most recognizable investment vehicles for international investors; it is liquid, prone to retain both tactical and passive funds, and it is one of the most buffered by regulators and outside influencers.

Global shares have steadily risen since the trough following the Great Financial Crisis in March 2009. And, while they haven’t been without their trials and tribulations since, the climb has been generally consistent throughout. Yet, with the past weeks and months, we have started to see some doubt and volatility return. Below, we have the performance of a range of major equity indexes - including the Athens Stock Exchange for contemporary relevance – benchmarked to the beginning of 2013 to make easier comparison. 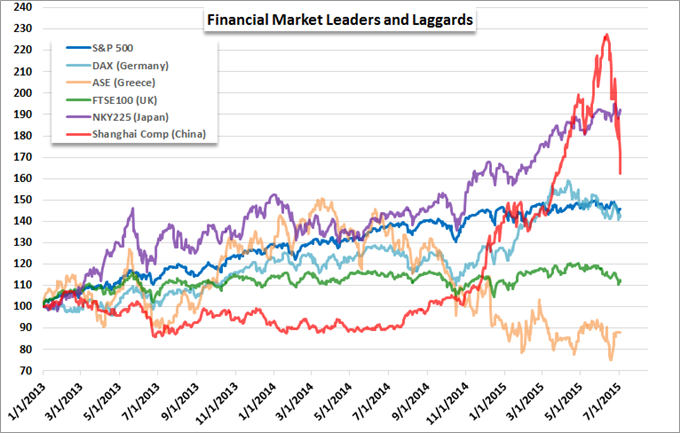 In general, we find positive performance. Looking more closely, we also see a common theme from those that are leaders. The adoption of exceptionally accommodative monetary policy programs (like the ECB’s QE and BoJ’s QQE) confers more rapid appreciation. However, the market that stands out above all others is China’s incredible climb. From its trough in 2013 to its peak this year, the Shanghai Composite surged 180 percent. This was due to a combination of factors like stimulus, economic assurance and most importantly the opening of the equity market to average investors (access to what is called A-shares accounts).

By most accounts, this recent run up could be labelled a speculative drive as it is certainly a new and speculative group of participants rushing in to take advantage of the climb. However, such a dramatic run up will inevitably lead to a ‘rebalancing’. In this case, the rebalance has led to a 29 percent tumble in the span of just 3 weeks. So far, the plunge has yet to drag the rest of the world with it; but the collapse has not gone unnoticed.

It would be easy to just label an environment where the masses were simply looking to exit any and all assets deemed ‘risky’ and move broadly to ‘havens’. However, that is a relative assessment. Blue chip stocks may be a haven to some while others need the absolute liquidity of US Treasuries and/or the Dollar. However, we can see the general tide change when the intensity increases. 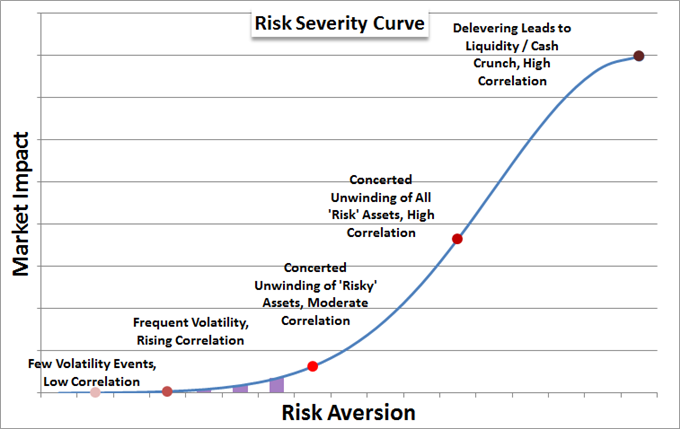 Such a big picture view of the market can be difficult to grasp and readily measure. To help, we can look at something specific to assess the intensity of investors need to deleverage and reposition to safety – correlations between disparate assets, volume building behind selling, liquidity measures showing trouble. My preference, however, is a simple gauge: the S&P 500. It represents the complacency, reach for yield and presumption of QE-supported low risk that have been tenets of this market. When we finally break this quiet, the dam holding fear back will rapidly deteriorate.