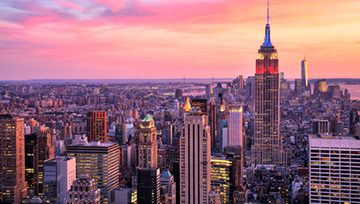 Do the Hours I Trade Matter? Yes - Quite a Bit.

- Many strategies fail because they ignore market conditions

- Using intraday seasonality could have an important impact on trading performance

Why do many traders fail at forex trading? Very often we find that common trading strategies have limitations that few understand. This article attempts to explain why some of the most popular currency trading techniques fail and, more importantly, how we might fix them.

Experience and actual data shows that many forex traders do poorly for one of three key reasons.

Our data on real client performance shows that traders on average do considerably worse during volatile market hours and through faster-moving markets. What does this look like and how might we look to improve on performance?

Looking at Real Trader Performance as a Start

We examine a major FX broker's 24 million real trades placed across the 5 most popular currency pairs in the 12 months ending in Q1, 2015. If traders opened trades at a given hour of the trading day, what was the likelihood that they ultimately turned a profit?

Important note: trade winning percentage matters less than actual profitability Thus the chart below shows whether or not traders ultimately profited by trading a given currency pair at a specific hour of the day and not whether each individual trade was closed out at a profit. 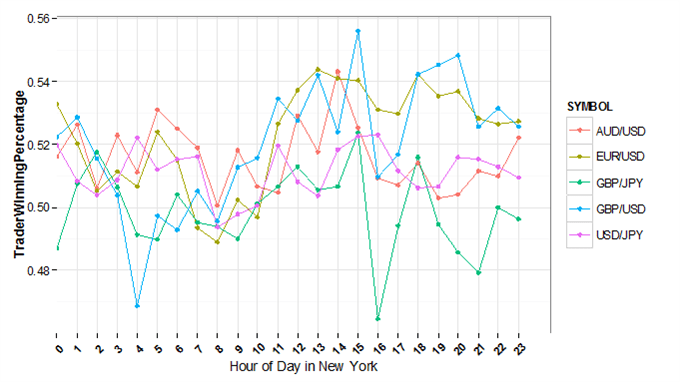 There’s a lot going on in this chart but the pattern should be fairly clear: on average, traders saw considerably higher chances of ultimately turning a profit if a trade was opened in certain hours over others. Before we go more in-depth we’ll focus on the GBP/USD for further clarity and as a relevant example: 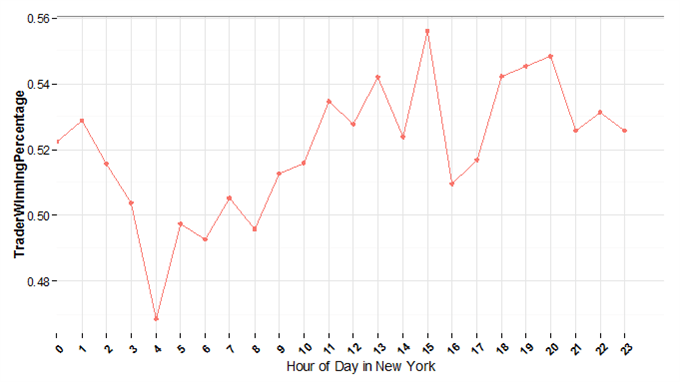 If a trader opened British Pound/US Dollar trades between the hours of 04:00 and 05:00 New York Time, they ultimately turned a net-profit in the GBP/USD a mere 47 percent of the time. This stands in stark contrast with the opposite end—if a trade was opened between the hours of 20:00 and 21:00 (8:00 PM – 09:00 PM), traders ultimately turned a net-profit in GBP/USD trades 55 percent of the time.

Likelihood of overall success was nearly 20 percent higher in the later period. Why? Let’s take a look at how the British Pound behaves to better understand the major discrepancy. 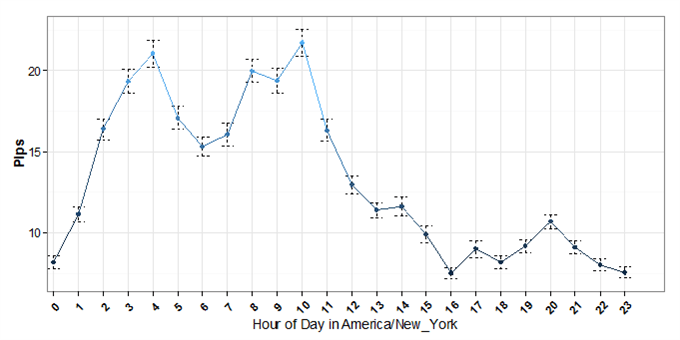 Immediately we see that hour-to-hour changes in the GBP/USD vary significantly per different time of day. On average the Sterling moved 22 pips from 4am-5am New York time versus less than 4 pips between 23:00 – 00:00—over five times as volatile.

If we compare this against average trader profitability, we’ll further see that there’s a fairly clear negative relationship here: traders are least profitable when markets are most active. Traders tend to see the best results during the Asian trading session. To see why volatility lines up so well with performance, we need to look at real trader behavior.

Our data on real trader behavior suggests that most traders tend to follow a somewhat straightforward strategy: Range Trading or Mean-Reversion trading. Put simply, such a technique is broadly defined as buying when prices are low/at support and selling when prices are high and/or at resistance.

Range Trading can work if price is not breaking major price levels and continues trading within relatively narrow ranges, and indeed this is typically the case during the quieter Asian Session hours. How might we match trading techniques to market conditions?

Does the Time of Day that I trade Matter?

Yes. It matters a lot. We have constructed a strategy that closely approximates the performance of the average trader, and we simulated that strategy’s performance on the GBP/USD. The results are not good. 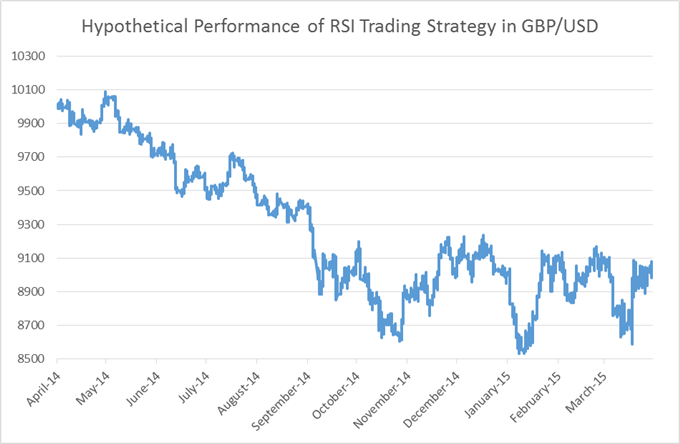 Yet once we factor in the time of day, things become interesting. We know that the Sterling tends to move less through certain hours—let’s use that to our advantage and make a rule to trade only during low-volatility times.

This next chart shows the exact same strategy over the exact same time window, but the system does not open any trades during the most volatile time of day, 6 AM to 2 PM Eastern Time (11 AM to 7 PM London time). 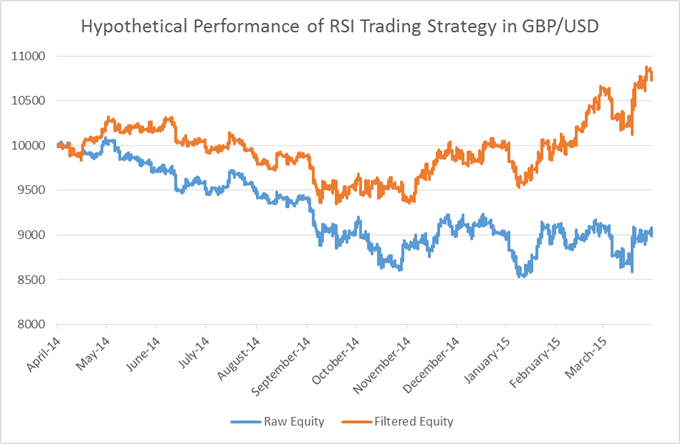 By sticking to range trading only during the hours of 2pm to 6am, the typical trader would have hypothetically been far more successful over the sampled period.

Of course not all currencies are the same. The Japanese Yen tends to see markedly more volatility than its European counterparts through the Asian trading session; these are the hours of the Japanese business day. 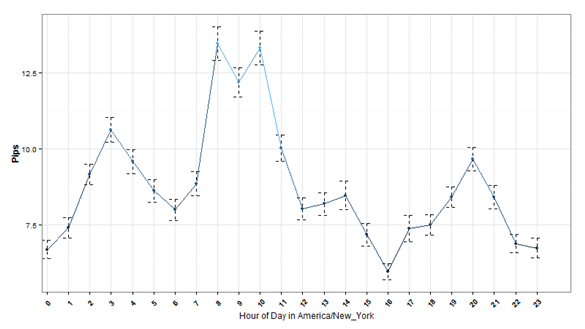 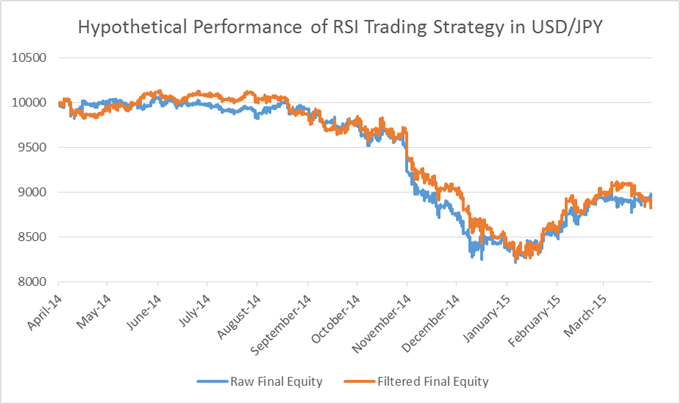 We find that the time filters have historically worked well for European currency pairs such as the British Pound/US Dollar and the Euro/US Dollar. We might range trade these currency pairs during the 2 PM to 6AM time window.

Unfortunately, our optimal time window does not work well for Asian currencies. Our tests of different time windows on the USD/JPY, AUD/USD, and NZD/USD have not produced comparable improvements.

Game Plan: What Strategy May I Use?

Asia-Pacific currencies can be difficult to range trade at any time of day as they tend to remain fairly active in what we would often consider ‘off-hours’ for most of the Western world.