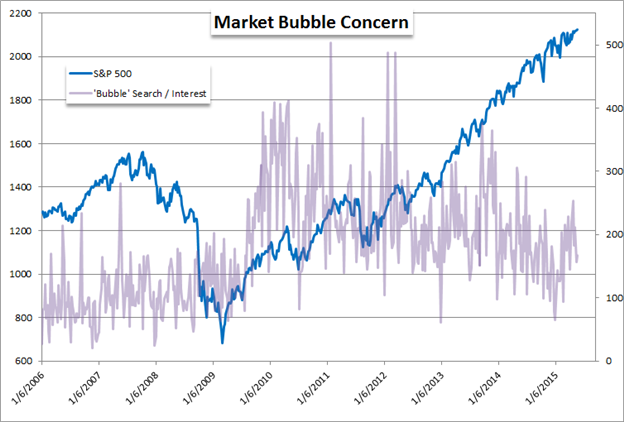 Bubbles in US Equity Prices and Bubbles in Global Market Exposure

For those that are always fearful of a disastrous market development, staying clear of the markets can mean missing exceptional returns to avoid a threat that may never materialize. The story of ‘chicken little’ often comes to mind whereby the market participant irrationally trumpets fear and concern while that paralyzes them.

However, extremes in the market do occur. And, those periods where bubbles have occurred in the past, the resultant market corrections have proven intense and painful. Maintaining a healthy and reasonable level of alertness – and even ‘fear’ – is reasonable when the stakes are this high.

Currently, it is not much of a reach to argue that the market is stretched and at risk of seeing a purposeful unwinding. The exposure and risk is inherent to the entire financial system, but that covers many regions, assets and variables to keep track of. It is useful to use a benchmark for this situation, and the S&P 500 stands as one of the best given its global visibility and its proclivity to rise when markets are operating under a ‘status quo’ situation.

The S&P 500 is just off a record high and has closed at a record 108 times since this six-year bull phase began. An economic and financial recovery from the Great Financial Crisis (GFC) would warrant a significant rebound, but the projection above and beyond the 2007 high (36 percent and counting) can be argued fundamentally and speculatively as excessive. Yet, fear that markets are reaching ‘bubble’ territory seems to be fading rather than building. In the above measure, we see the search interest / coverage for ‘bubbles’ in the market is at actually easing as new record highs are hit. 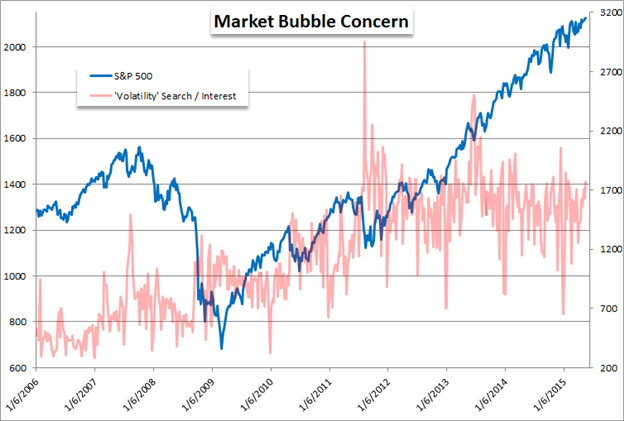 Even concern over the exceptionally low level of volatility in the market doesn’t seem to be gaining much traction. This is unusual as the traditional measures of volatility – the VIX for equities for example – are derived from options which are used as insurance. Theoretically, we want protection the most when risks are highest. 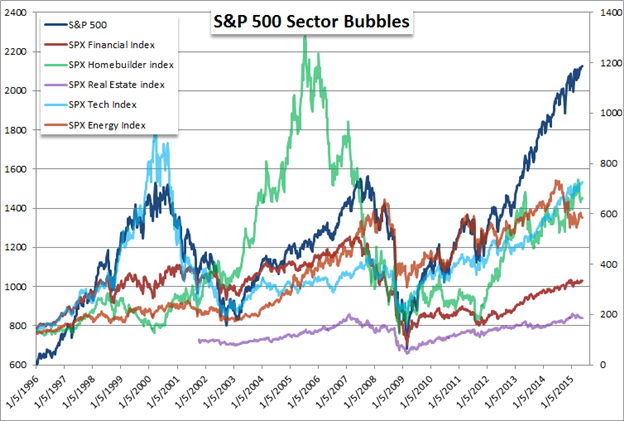 Looking for bubbles over the past few decades has meant looking at particular areas of the market that are showing exceptionally obvious extremes – however, when these extremes were building, they were didn’t seem to generate much concern at the time. Only after the markets started to unwind did the consensus feel comfortable labeling the situation a ‘bubble’. In 1990-2000, the excess showed up clearly in Technology – though many other sectors were hitting extremes. The same is true of 2005-2008 when Housing stood out, but the banking sector and energy were also flying. 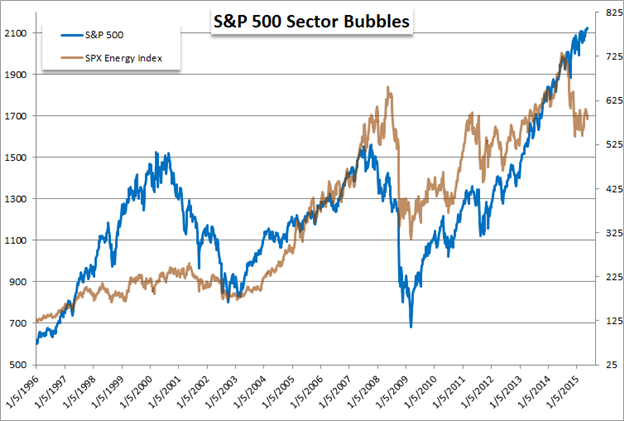 Currently, there is evidence of excess in a number of sectors. Energy has taken a nasty tumble alongside the drop in oil prices and can thereby be seen as a first mover. That said, there is a positive economic influence from a drop in energy that can offset the negative speculative implications of diminished revenues for the energy firms. 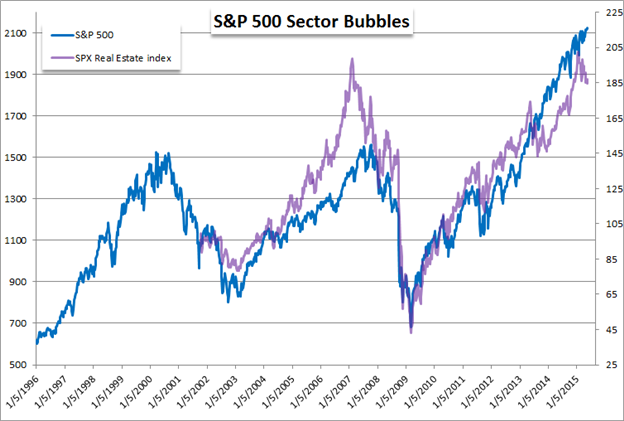 Real estate is another area that is stretched both on a price and fundamental basis. Above, we can see that the segment’s tracking index actually overtook the 2007 peak. Housing prices – fueled by cheap funds supplied through central bank stimulus – have developed into a concern for more than just US officials. 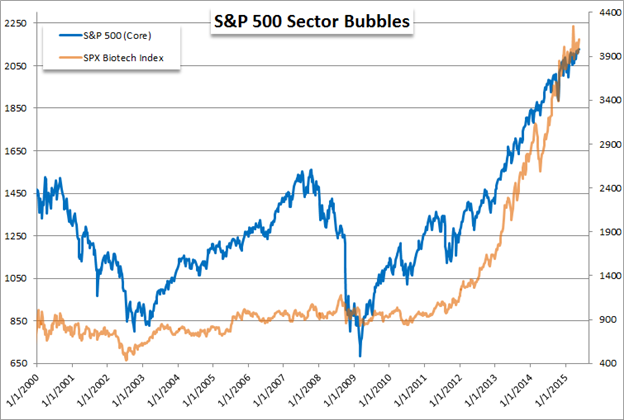 Among the high-flying market segments, Biotech takes the cake. Capital has chased the appeal of quick returns in share value through windfall profit hopes from FDA approvals or through simply the speculative inflows that result from chasing the market. This is an exceptional run up for this area of the market, but a reversal in any one of these sectors is only a possible catalyst for the bigger picture. More likely they would be a victim of a turn in sentiment. 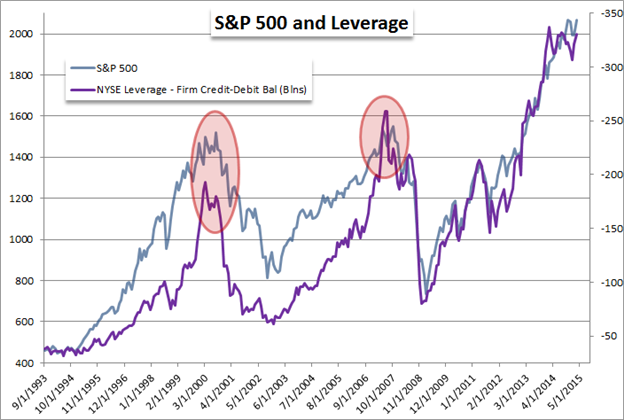 More illustrative of the underlying market problem – and thereby the true bubble – is the use of leverage in the most traditional areas of the market. This is need for higher returns and few means for actually achieving it. Thereby exposure – to riskier assets and through borrowed funds – is one of few remaining outlets. Yet, as most FX traders inherently recognize, leverage works both ways. It can increase returns, but it will also amplify losses.

So, when will this fundamental bubble pop? There will likely be a leading segment that precedes the broader market’s adjustment, and it may be given the title of the tipping point for the financial system. However, the risks are more systemic than one area of the market can represent. Trade your strategy, but remain vigilant.