What are the Critical Dates for Greece and the Euro?

Greek negotiations with the Euro Working Group (EWG) and the International Monetary Fund remain a key risk to markets as a Greek default would likely force substantial market volatility and force it out of the Euro Zone. But what are truly key deadlines for the at-risk Hellenic government and broader markets? Here are some of the critical dates to watch in the weeks and months ahead.

Key Dates for Greece Continue to Warn of Substantial Volatility

It seems as though the Greek Government has had a critical deadline in every single one of the past number of weeks, and still it remains solvent and a decline in Euro and broader financial market volatility suggests that danger has receded. Yet this is misleading for a simple reason: the central Greek Government will almost certainly run short of cash soon. Default is effectively guaranteed if it does not reach an agreement for a bailout extension with the EWG and IMF.

A Greek debt default would likely lead to a much-larger domestic crisis, an exit from the Euro Zone, and the establishment of an alternate Greek currency. This remains the major risk to broader financial markets and systemically-connected economies.

What’s the Most Important Date on the Calendar?

In concrete terms, the single most significant deadline on the calendar is likely the European Central Bank bond repayment due on July, 19—assuming that the Greek Government remains solvent up until that point. The repayment to the ECB is critical due to the Greek Central Bank and Greek Banking Sector’s heavily reliance on the ECB’s Emergency Loan Assistance (ELA) program. The ELA has effectively kept the Greek financial system intact as these funds protect against large outflows of capital from private banks. If the Greek government is unable to repay the ECB, we can be almost certain it would be cut off from much-needed ELA funds and many Greek banks would become insolvent.

In the interim, Greece will need to repay a cumulative €13,653m to Greek Treasury Bill holders and the International Monetary Fund. Clearly it needs to raise significant funds in order to make those payments, and its ability to raise capital will be a major focus.

A look at forex market volatility prices for the Euro/US Dollar underlines the sense of urgency: some of the most sophisticated traders in the world believe that the coming four weeks will bring substantially more uncertainty than the coming year. 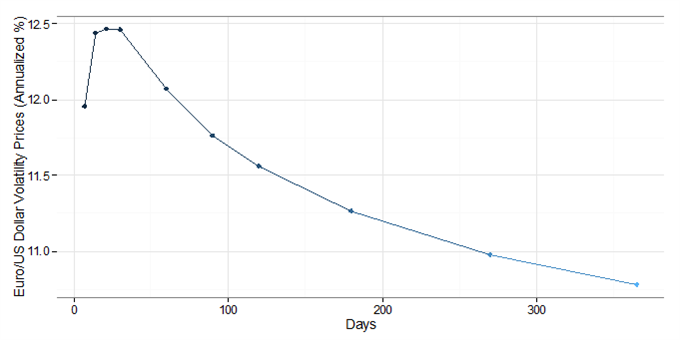 Greek debt auctions on May 6, June 10, and July 8 represent key dates that will test market confidence in Greek/EWG negotiations and whether it remains in the Euro Zone. As it stands most of the Greek government’s short-term debt is held by domestic banks. In normal circumstances those same banks might step in and buy more Greek debt. Yet the European Central Bank has told Greek banks they are not to increase their holdings of short-term government debt if they are to conitnue receiving ELA funds.

The past several Greek Treasury Bill auctions have seen sufficient demand, but the risk of a failed auction continues to grow as key deadlines loom large.

Euro Reactions are Far from Predictable

We’re entering a critical stretch for the ongoing Greek sovereign debt crisis, but the clear difficulty is pinpointing the exact moment at which traders should take extra caution.

If upcoming Greek debt auctions fail to elicit sufficient interest, we could see substantial Euro volatility and broader financial market turmoil. Heightened sovereign risks could discourage market makers from making prices in EUR pairs, and in effect this means that the Euro could both rally and fall sharply on any news headlines.

Any surprises could force substantial market moves, and traders should limit trading leverage—particularly in EUR pairs—ahead of the key dates.Caution is advised until we see a true breakthrough in negotiations.