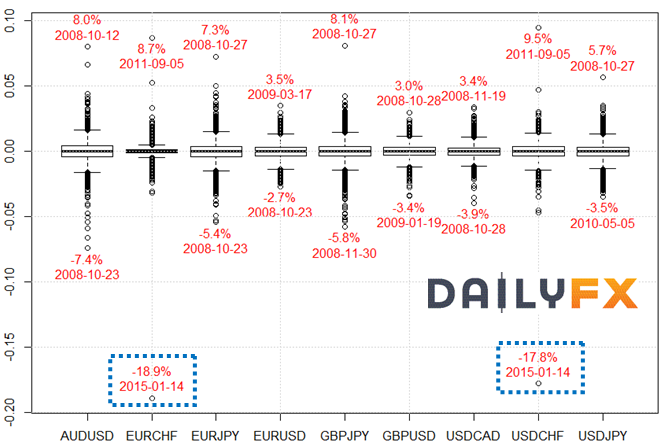 We have to go back to the heights of the financial crisis through 2008 and 2009 to find remotely comparable moves in non-CHF pairs, and indeed the nearly-unprecedented moves have markets on edge. Our DailyFX Volatility Indices, which meaasure implied volatility prices paid/received in FX options markets, have surged to their highest since the so-called “Flash Crash” in May, 2010.

Today the Euro fell nearly100 pips on mere rumor that the European Central Bank will announce unprecedented sovereign debt buying through the coming meeting, and strong Euro reactions seem near-guaranteed on any surprises.

Dow Jones Newswire sources claim the ECB Governing Council is discussing approximately 1 trillion euros’ worth of easing through 2016, and indeed this may set market expectations for the potentially significant decision. Would this amount be enough to sink the Euro to fresh lows? Extremely stretched EUR positioning will put traders on edge, and it’s critical to rememember that fear is a much stronger emotion than greed.

If traders fear an aggressive Euro bounce, many speculators may head for the exits and force dramatic rallies across EUR pairs. And though we certainly can’t rule out further Euro declines, current data suggests there are relatively few traders left to sell. Risks seem uneven and may favor the topside.

Any especially strong reactions could likewise result in limited FX liquidity and cause significant liquidity risk. Traders should limit trading leverage—particularly in EUR pairs—ahead of the key decision.

The Swiss National Bank’s decision to abandon its aggressive policy may be remembered as the first time a major central bank “blinked” in the face of clear market pressures in the post-QE era. Investors have grown accustomed to aggressive policy from the ECB, US Federal Reserve, Bank of England, Bank of Japan, and others in response to financial and economic difficulty. Yet markets and specific assets can only be kept artifically high (or low) for so long.

Given clear economic distress in the Euro Zone, can the European Cerntral Bank reasonably be expected to cure the ills of the world’s largest single-consumer market? Hyperaggressive policy from the US Federal Reserve has been successful in keeping interest rates artificially low—not only in the US but abroad. Indeed, expectations of European Central Bank bond buying helps explain why German and French Government Bond yields trade near record-lows.

Hyperactive Central Banks Lead Forex Volatility to Record-Lows, but For How Long?

It is little exaggeration to claim that the SNB may have set us on a path for considerably higher FX market volatility, and the effects may be especially clear on the highly-anticipated European Central Bank decision and beyond.

Traders should use caution in trading the Euro pairs especially ahead of the ECB and trade with lower leverage until volatility declines.