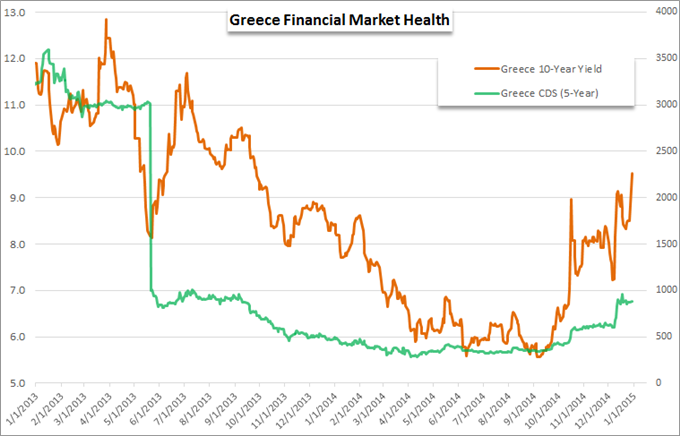 Greece Leads Euro and European Market Back Into Troubled Waters

There are three general concerns that threaten to plague the Euro through the foreseeable future. The first – and to this point, most active – is the European Central Bank’s efforts to ramp their unorthodox monetary policy campaign in an effort to balance long-standing economic and financial disparity. While this theme will continue to drive the currency moving forward, a renewed fundamental theme may lead to far more aggressive capital outflow and thereby pressure on the Euro. Seemingly coming full circle, Greece is back in the headlines to revive concerns over the financial and political stability of the Eurozone – much like it did in the early days of the Euro-area financial crisis back in 2010.

Monday morning, the Greek Parliament held a third vote in an attempt to elect a president (Prime Minister Samaras’s nominee was Stavros Dimas) with a 168 or 300 ‘Yea’ that fell short of the 180 necessary. This will push the country to full elections on a suggested January 25.

The reason these elections are unnerving investors both within the country and across Europe is that Syriza enjoys a lead in opinion polls of over 3 percentage points as of this past weekend. The party – headed by Alexis Tsipras – is staunchly against the austerity program Greece has had to live by in order to access the Troika’s bailout program starting back in 2010. While the Tsipras wants to keep the country within the Eurozone, shirking the rules agreed to by all the parties when the rescue lines were laid out is unlikely to end pleasantly. While it is still unlikely that Greece will leave the Eurozone when all is said and done, the risk is still real and growing.

After the third vote for a new Greek president fell through, the Greek markets reacted strongly. The benchmark ASE equity index dropped 3.9 percent (it was down as much as 11.3 percent) and the sovereign 10-year bond yield surged 12.1 percent. Credit default swaps used to hedge against default on the government debt were slow to respond, but are already elevated. 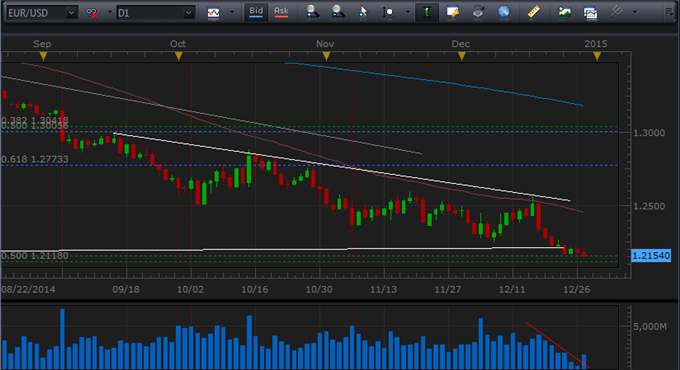 One glaring standout in the markets’ response to the news was from the Euro (read the 1Q 2015 forecast for the Euro here). Though it is at its lowest level since August 2012, EURUSD responded with a tepid decline on the day. This reserved reaction is no doubt in part due to the liquidity during this holiday-shortened week. However, it likely also draws from the lack of a clear path for this risk to take as well as the expectation that a motivated ECB will enact policy that can ‘solve’ or offset the new wave of trouble. That confidence is probably misplaced though. 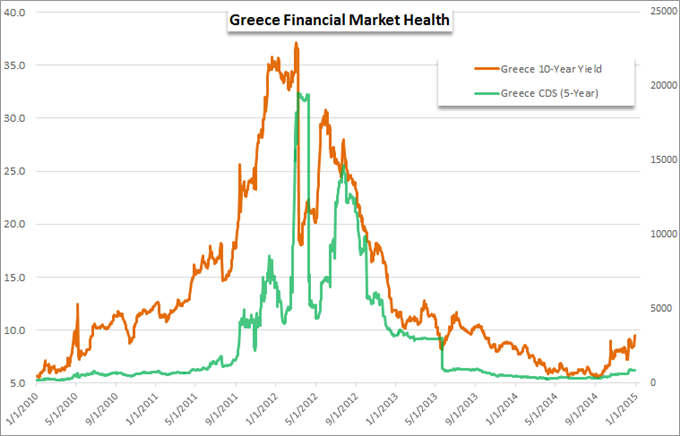 The ECB’s efforts to help stimulus growth and balance the financial system to this point have struggled to keep the peace – and that is without a crisis to contend with. Looking back at the debt crisis that arose back in 2009/2010, the situation worsened as the full extent of Greece’s debt load became clear after the spotlight was pointed on derivatives used to obfuscate its financial condition. There is unlikely to be such a cache of hidden debt that is happened upon this time around, but the fundamentalist view of the popular political group against austerity will make for just as much risk. 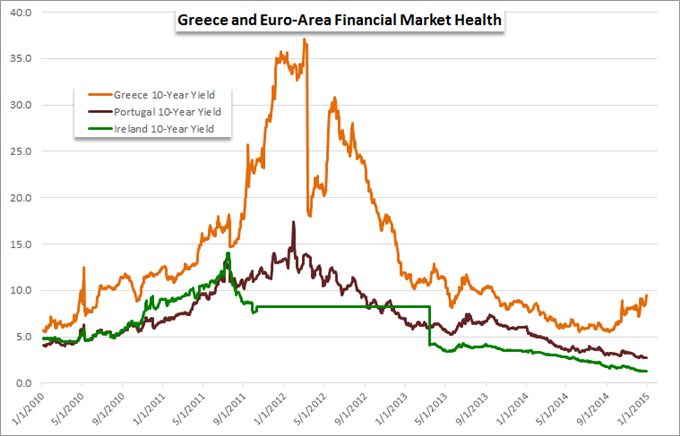 The true risk of Greece’s situation for Euro-area investors is that the problems spread. If Greece is successful somehow in throwing off austerity without exiting the Eurozone, other countries that have maintained the pressure will cry foul. If the country decides to exit the Monetary Union, it will be a symbolic gapping hole which undermines the strength of this largest aggregate economy’s existence. As such, Euro traders should monitor closely the market benchmarks one step away from Greece – given Portugal and Ireland were other first-adopter bailout recipients, their yields will be important. Though, given recent circumstances, Spain, Italy and Cyprus may be more at-risk. 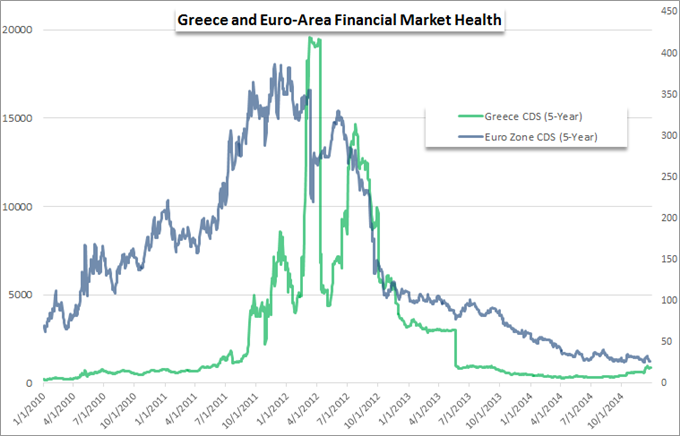 Default risk measured in CDS will also be a good means for establishing the market’s concern. However, given Greece essentially defaulted on its debt terms in the past without these products paying out, there may be a significant reduction in this market’s sensitivity to the issue. 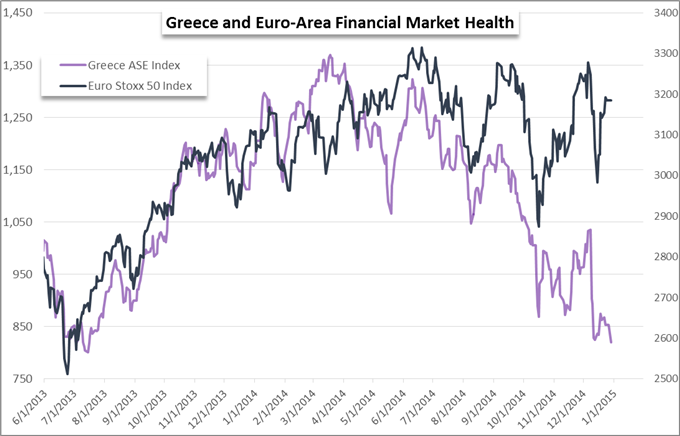 There is a distinct ‘sovereign’ risk to these new conditions, and its influence can be very destructive to the markets. However, the greater overall risk is to the general confidence of the speculative market. There is already a sense that the global capital markets are already richly priced with excessive use of leverage and exposure to extremely risky assets in an effort to compensate return that is undermined by stimulus. If a general, global ‘risk aversion’ shift coincides with financial trouble in the Eurozone, it can exacerbate an outflow of capital from the region and amplify a Euro selloff. 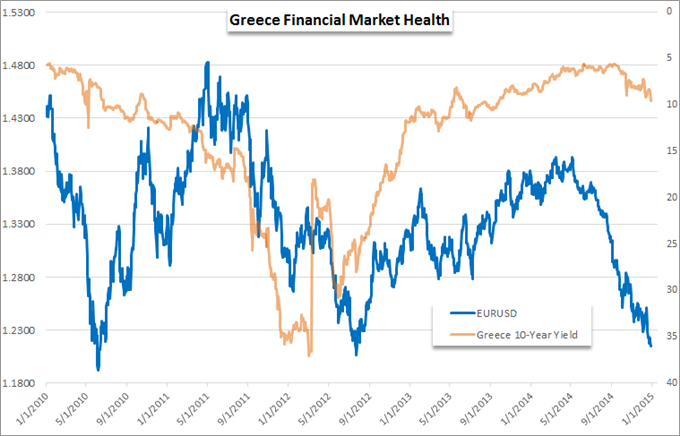 So, while Greece may not have reactivated an already-mature bear trend for the currency. We should reflect on the full scope of the risks that the new issues bring as well as the general conditions of the market. It wouldn’t take much to unnerve markets in their current state. 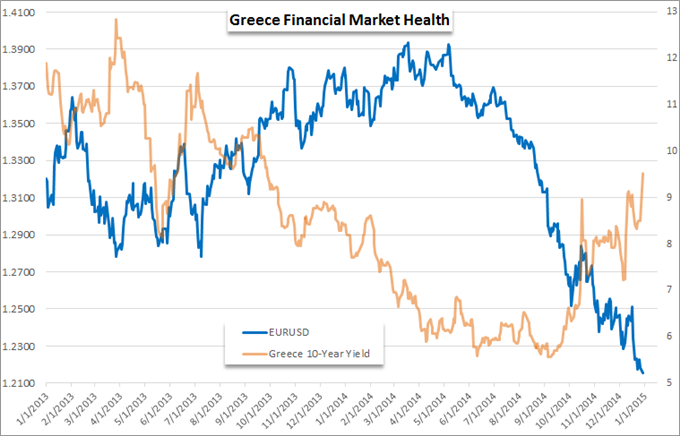