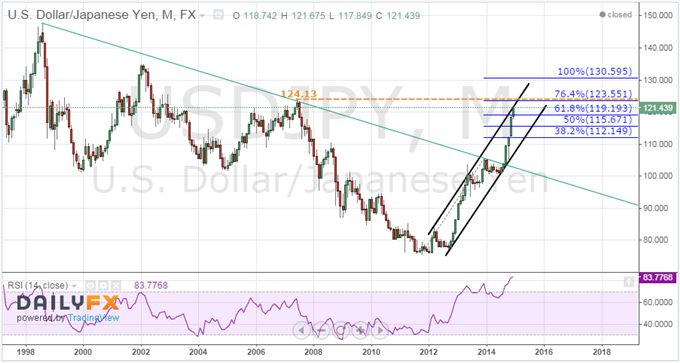 The Japanese Yen finishes the fourth quarter and the year as one of the worst-performing major currencies of the world, and there is little reason to believe that the first quarter of the New Year will bring relief. A hyperactive Bank of Japan represents the most important risk to the JPY as central bank policy diverges versus key G10 counterparts. Indeed it was unexpected easing from the BoJ which sparked a sharp Yen tumble.

There is little evidence to suggest that further action is imminent through Q1, 2015, but political uncertainties as well as broader macroeconomic factors suggest the Japanese Yen could trade yet lower versus major FX counterparts.

The Bank of Japan surprised markets as it decided to boost its Quantitative Easing measures at its October 31 meeting, and its current pace of asset purchases signals that we may continue to expect Yen weakness over the coming months and year. If it leaves policy as-is—unlikely in our view—its total balance sheet will be worth more than half of total Japanese Gross Domestic Product by the end of 2015. By way of comparison, the US Federal Reserve ended its QE program through October and left its total balance sheet at approximately 25 percent of US GDP.

Given that QE purchases effectively amount to printing money, we expect that the increased supply of Yen in circulation will force depreciation versus the US Dollar and other counterparts. It is further worth noting that QE keeps interest rates low and has tended to boost asset prices. In effect this puts more capital in domestic investors’ portfolios and encourages Japanese earners to trade their Yen for higher-yielding currencies across the globe.

If the LDP does indeed remain in power, we can expect that the Bank of Japan will retain their mandate for Quantitative Easing and fiscal policy will remain quite accommodative. Yet structural reforms remain elusive as Abe and the LDP have shown little appetite for politically costly changes.

A resounding LDP win would thus dim outlook for the domestic currency for three reasons: 1. Accommodative BoJ policy forces Yen depreciation. 2. Japanese government fiscal excesses decrease the attractiveness of domestic investment. 3. Timidity in structural reforms may make a more lasting economic recovery increasingly difficult. None of this guarantees that the Yen will trade lower through the short term, but a difficult fundamental backdrop may make it a tough quarter for the Japanese currency.

The ferocity of the Japanese Yen selloff has been nothing short of remarkable. USD/JPY appears to have overcome the structural long-term down trend established from August 1998 and is now working on its sixth consecutive month of gains. A key resistance cluster looms ahead however, warning that upward momentum may at least give way to a period of consolidation if not outright reversal.

The 121.80-124.13 area is marked by three separate layers of technical significance: the top if a rising channel guiding prices higher from the late-2011 to early 2012 lows; the 76.4% Fibonacci expansion implied by that trend; and the June 2007 swing high. Aggressively over-extended RSI readings warn that – if nothing else – the pace of recent gains is highly unusual based on historical USD/JPY price action.

Importantly, none of this suggests that the USD/JPY rally can’t continue. On the contrary, the mere presence of resistance in no way means that it must necessarily hold. Indeed, if that were the case, markets would be permanently range-bound and never trend at all. With that said, current technical positioning argues against jumping into long positions with reckless abandon, warning that if a reversal were to come, this is a logical place to see it.