The British Pound could claim the most hawkish central bank policy outlook in the G10 FX space until relatively recently. Those days appear to have passed, with priced-in Bank of England (BOE) rate hike expectations swiftly unraveling since July. The shift in investors’ outlook appears to have coincided with a darkening of the Eurozone’s economic fortunes. Indeed, a plunge in the expected size of on-coming UK tightening (as reflected in OIS pricing) played out alongside a downturn in manufacturing- and service-sector activity in the currency bloc. A survey of economists polled by Bloomberg reveals a dramatic downward revision in 2015 Eurozone GDP growth bets that occurred in tandem.

This is not altogether surprising. The Eurozone is the UK’s largest trading partner: the share of total exports headed for markets on the Continent has been on the rise and is now hovering near a two-year high of 48 percent. That means that even as the UK economy has recovered from the 2008-09 recession, its sensitivity to headwinds from the Eurozone has increased.

For its part, the European Central Bank (ECB) has introduced a medley of stimulus measures in 2014 in an attempt to bolster growth and reverse a slide toward deflation. However, with negative deposit rates in place, one TLTRO allotment done and covered bond purchases underway, the results have proven lackluster. The central bank’s balance sheet has barely budged following a sluggish bounce from three-year lows recorded in mid-September.

Looking ahead, more ECB stimulus expansion seems unlikely in the near term. ABS purchases have not begun and one more TLTRO allotment is due in December. ECB officials will want time to monitor the entire scheme’s performance before they can sell taking the next step – “sovereign QE” – to opposing member states (notably Germany). In fact, ECB President Mario Draghi and Vice President Vitor Constancio have signaled that any decision on expanding stimulus will come after the first quarter.

This means a respite from Eurozone-induced pain on UK economic growth is not in the cards in the near term. That opens the door for investors to continue trimming their BOE rate hike forecasts, keeping the Pound firmly under pressure. 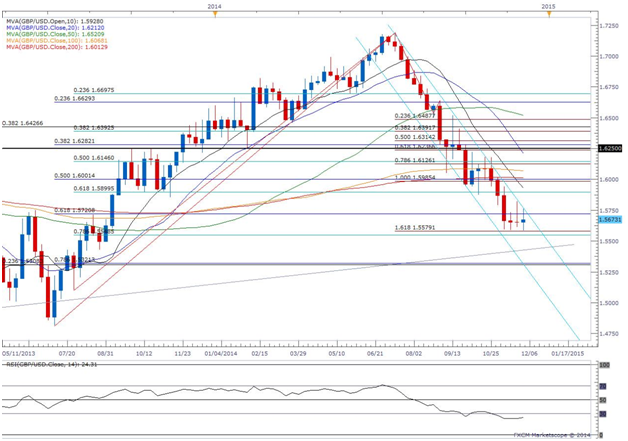 Even though the Bank of England (BoE) remains on course to normalize monetary policy next year, the bearish trend in GBP/USD may continue to take shape during the first-quarter as market participants anticipate the Fed to lead its U.K. counterpart. Expectations for a Fed rate hike in mid-2015 should largely keep the downward trending channel intact, and GBP/USD remains vulnerable to a further decline should the Relative Strength Index (RSI) push deeper into oversold territory.

At the same time, the extreme reading on the RSI raises the risk of seeing a larger correction in GBP/USD as the oscillator turns around ahead of the lowest reading since 2008, and the lack of momentum to break below the Fibonacci overlap around 1.5550-80 may highlight a near-term bottoming process in GBP/USD as price continue to press against channel resistance. Nevertheless, the broader outlook for pound-dollar remains tilted to the downside amid the ongoing series of lower-highs, and the pair may continue to give back the advance from July 2013 especially as we see a growing number of Fed officials show a greater willingness to move away from the zero-interest rate policy (ZIRP).