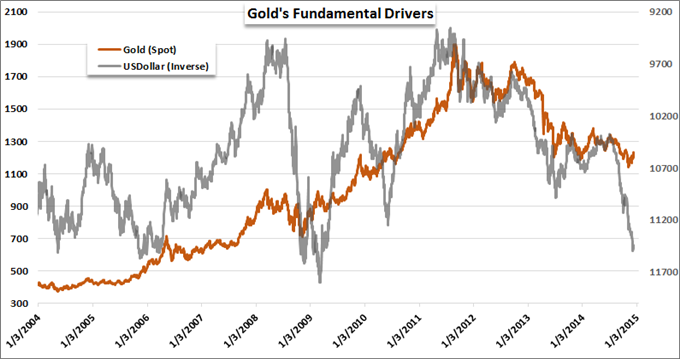 Gold’s Future Closely Tied to the US Dollar’s

After an extended bout of congestion, Gold reverted back to its broader trend this past quarter and dipped to fresh four-year lows. Yet as remarkable as these levels are on a historical basis, there remains a notable lack of conviction to the metal’s pace. Controlled swings between multi-year lows and failed recoveries will likely continue to plague investors until one of the commodity’s major fundamental currents is resuscitated. As it happens, circumstances are converging in such a way that the opening months of 2015 will likely rouse all of its principal roles: alternative store of wealth, safe haven and portfolio diversification…but not necessarily in a beneficial way.

Through the height of Gold’s incredible run from 2007 to 2011, there was a perfect storm of fundamental support found via the aforementioned themes. In the midst of a global financial and economic crisis, investors were scrambling for eminent havens. Monetary policy officials responded by dramatically decreasing global interest rates (which removed a considerable hurdle for an asset that provides no yield) and soon graduating to unorthodox policy like stimulus that devalued ‘fiat’ assets. Moving into 2015, we are revisiting these themes; but the mix is substantially different. As it happens, the US Dollar is motivated by the same set of elements but benefits under different circumstances. That said, these two benchmarks will likely continue carving out divergent paths ahead.

In 2015, the market will focus more sharply on monetary policy efforts in terms of effectiveness for maintaining stable economic and market conditions as well as its implications for currency devaluation (what some have taken to calling ‘currency war’). Both the ECB and BoJ have made exceptional efforts to increase their respective balance sheets which in turn has driven the Euro and Yen dramatically lower. That trend is likely to continue; but this time around, gold is not positioned as a last resort. The Dollar is an appealing and liquid substitute. What’s more, the US (alongside the UK) is closing in on its return to a policy tightening regime. Currency and commodity will not present a perfect mirror to each other though. In the event of an overdue, global deleveraging of risky assets in 1Q, gold would likely find a bid alongside the Greenback. Yet, the market would soon show a USD preference for either its depth or carry. 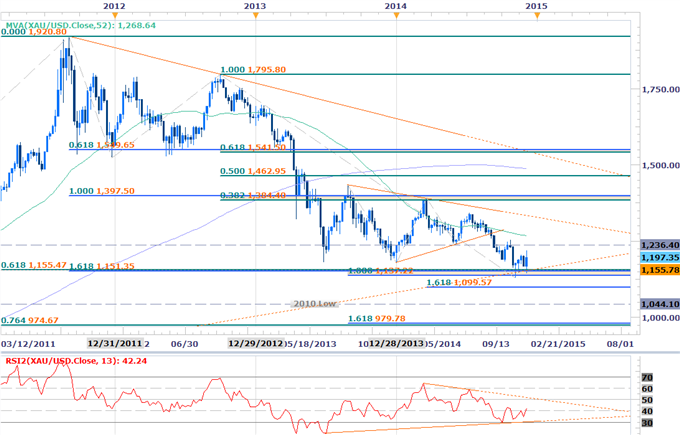 Gold prices are down roughly 1% quarter-to-date after recovering off a key threshold in early November trade. Last quarter we noted support targets at the, “2013 lows at $1179 - a barrier that was defended twice last year – and a critical Fibonacci confluence in the $1137-1155 region. Short exposure into this threshold is at risk…” Indeed gold achieved our target at this key support region, trading as deep as $1130 before rebounding back into the $1200 region. Note that a 2005 trendline support also converges on this region with a break below needed to for the next leg down to materialize. While the broader fundamental picture for gold remains weighted to the short-side, heading into the start of 2015 this region will remain paramount with ongoing divergence in the momentum signature warns of possible exhaustion in the medium-term.

That said, be on the lookout for a rally heading into first quarter to offer more favorable short entries with a break below the $1137/55 barrier targeting support objectives at $1100, the 2010 low at $1044 and $975/749. Interim resistance stands at $1236 with only a breach above August 2013 trendline resistance invalidating our broader bearish outlook. Such a scenario would look to target more critical resistance at $1384/97. Bottom line: looking for a rally to sell TL resistance with a break below $1137 needed to keep the short-bias in focus.