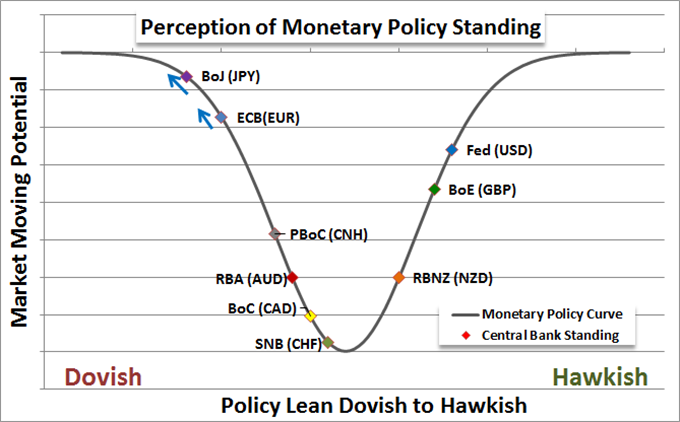 US Dollar’s Exceptional Rally Tougher to Feed in 2015

Like a forest fire that has consumed the immediate landscape, the US Dollar’s extraordinary rally through the second half of 2014 has burned through much of the fundamental and technical potential it was previously harboring. Further gains are certainly likely – and even probable – but sustaining the drive and its incredible pace will require more robust and directed fundamental reinforcement. The United States relatively robust pace of economic growth and the Federal Reserve’s progress towards its first rate hike will be the most accessible founts moving forward. However, for untapped potential, a seismic shift in the global investors’ confidence in low volatility conditions and passive returns can drive important pairs like EURUSD through critical plateaus.

Value in the FX markets is relative. That principle was the backbone of the Dow Jones FXCM Dollar’s (ticker = USDollar) rally this past year to more than five year highs. Without the context of weaker counterparts, the country’s uneven economic recovery and the central bank’s decision to hold rates at a record low 0.25 percent while its balance sheet stabilizes at record levels wouldn’t look particularly flattering. Instead, we find global giants like the Eurozone and Japan are falling deeper into stagnation and their own monetary policy regimes are ballooning. That Dollar-reinforcing fundamental gap will likely widen even further in Q1 of 2015 as the ECB considers an upgrade to full-scale QE with recession looming and Japan redoubles its economic support amid an economic contraction and election.

While the depreciation of the Dollar’s most liquid counterparts can be an important source of progress for the currency in the coming months, its bearings will not be totally derivative. Further improvement or degeneration of the Greenback’s own backdrop will set a focal point for pairs like EURUSD, USDJPY and other ‘majors’. From a growth perspective, no economy is an island. If the world’s largest economic players continue to suffer from the malaise they found themselves in the second half of 2014, the United States will likely see the ill-effect bleed through. Though, perhaps more fluid is the monetary policy regime. The Dollar has taken on an almost ‘carry-like’ appeal as it is positioned to be one of the first major central banks to return to rate hikes. As we close in on the ‘mid-2015’ time frame the FOMC has maintained, we should expect the language to intensify and draw out the bulls. That said, the pace of the hawkish regime is more important than the first move, and an over-zealous forecast based on the initial shift could be prone to moderation.

A Particular Kind of Safe Haven

Given the United States’ comparatively robust economic performance and its advantage on the monetary policy spectrum, the Dollar seems to exude some of the favorable qualities of a high-return / high-potential currency. In a financial setting where the masses continue to operate on a ‘reach for yield’ and ‘complacency’ basis, bulls can exploit this favorable bearing. However, could that same alignment to ‘risk’ pose a problem should sentiment falter? That depends on how intense and systemic the swing in mood is. 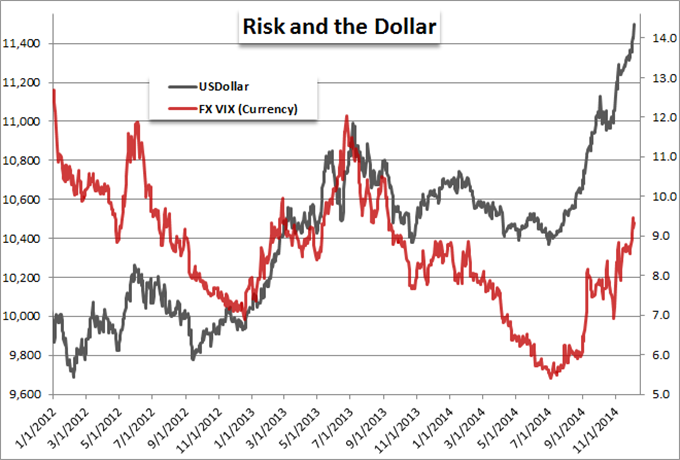 In the graph above, we can see that volatility (often considered a gauge of ‘fear’) in the FX market has been trending higher since mid-2014. That same sense of fear is not evenly distributed across the financial system though. This is a kind of twilight scenario where certain asset classes – FX, emerging markets, high-yield fixed income – are showing a rise of uncertainty that leverages favor for liquidity. The search for a haven that also produces a competitive return generates few results. Yet, should this peripheral sense of fear intensify and spread, a need to unwind any and all over-leveraged positions may quickly find the long-Dollar position under pressure – particularly with pairs like USDJPY. That said, should the financial system devolve even further into a scene of panic; an absolute need for liquidity will override the ‘return’ element completely and expose the Greenback’s essential appeal as a global safe harbor. 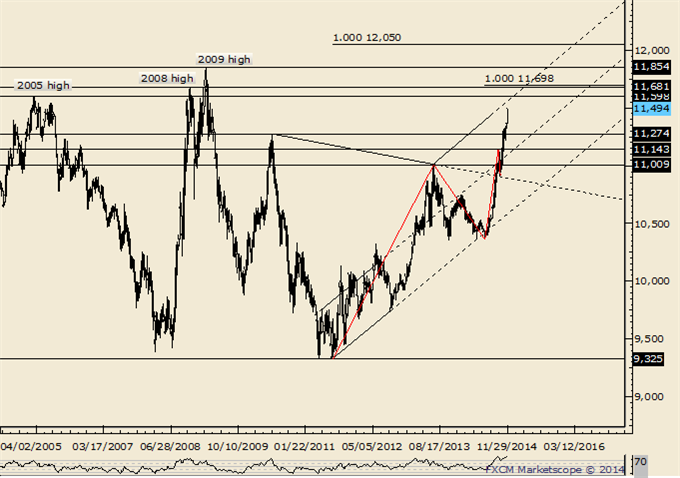 Last quarter, we presented “a longer term target zone at 11324/52. This zone is defined by where the advance from the 2011 low would consist of 2 equal legs and the head and shoulders objective that formed from October 2010 to February 2013.” That target wasn’t bullish enough as the index is pressing 11500 now. Where now? The index is approaching possible channel resistance. The channel intersects the 2005 high at 11598 during the first week of 2015 and the 2008 high at 11681 in April. The rally from the June low would consist of 2 equal legs at 11698, which is in line with the 2008 high.

What about possible support? Watch the parallel that extends off of the January 2014 high (it cuts through the middle of the October consolidation) for possible support. That line intersects with the September high at 11143 in mid-January. It may seem crazy to think that the USDOLLAR could drop to that level in a month (3% from 11500) but extreme corrections are part of extreme trends.

Bottom line, look for resistance at the upper channel line and support at the mid line to turn bullish again. We’ll note a long term target with equality of waves from the 2011 low at 12050 but Q1 focus will likely be on identifying support and ‘resetting’ the market for a run at this level later in 2015.