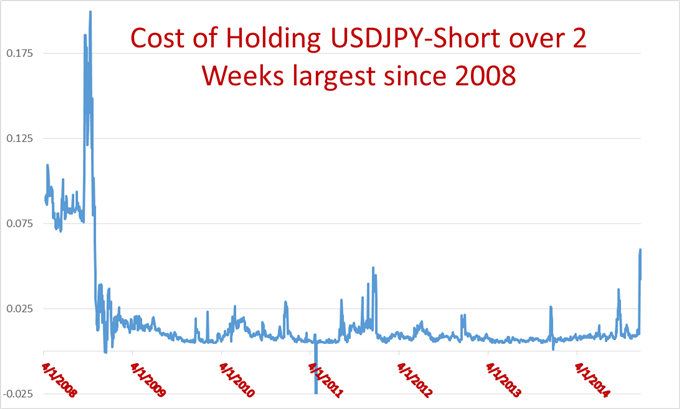 The end of the calendar year threatens to force a liquidity crunch in US Dollar markets, and traders should note risks of elevated financing costs in major FX pairs.

Why Might Rollover Rates Rise Sharply in the Coming Weeks?

A look at interbank forward markets shows that holding Euro and US Dollar-short positions short positions versus the Japanese Yen is near its most expensive since the heights of the global financial crisis in 2008.

If a trader is long the USDJPY they could theoretically collect this difference, but in practice these relative rates are guided by supply and demand and past experience has shown otherwise.,

Indeed we saw similarly pronounced surges into the end of the second quarter in Euro pairs; at the time we noted that a single day’s EURUSD financing charge was the rough equivalent of the combined 25 days prior. It seems as though traders may continue to expect similar spikes at month and quarter end. The effect is likewise pronounced in Yen pairs, and in addition to the USDJPY the EURJPY looks especially stretched. 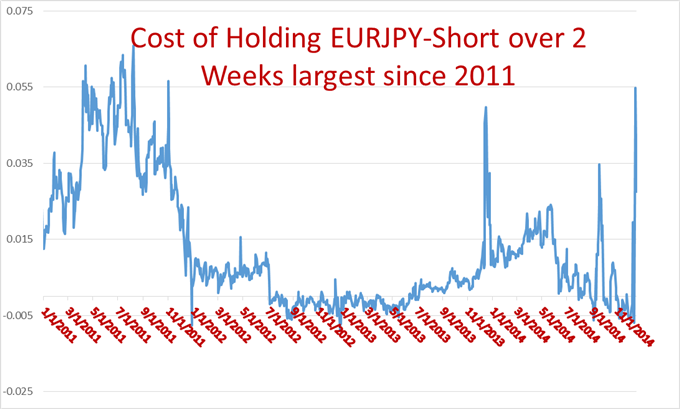 Interbank forwards pricing show that holding a EURJPY-short position for two weeks would cost the most in financing charges since episodes of Euro funding troubles in 2011.

As with the USDJPY, a trader should theoretically be able to collect this difference, but experience over similar episodes showed otherwise.

Given that FX market volatility typically drops significantly in the final weeks of the calendar year, these charges represent an especially large cost to a trader looking to capture smaller currency moves. Indeed, the sharp changes in interbank lending markets could in some cases make the difference between a winning and losing trade.

Overnight interest rates will guide whether the trader will ultimately pay to hold a position or earn interest on the trade, and typically these interbank rates will track a central bank’s target quite closely. Yet sharp changes in the supply or demand for a specific currency can shift interbank borrowing rates in a hurry.

Traders should be wary of these elevated costs headed into the final weeks of the trading year.