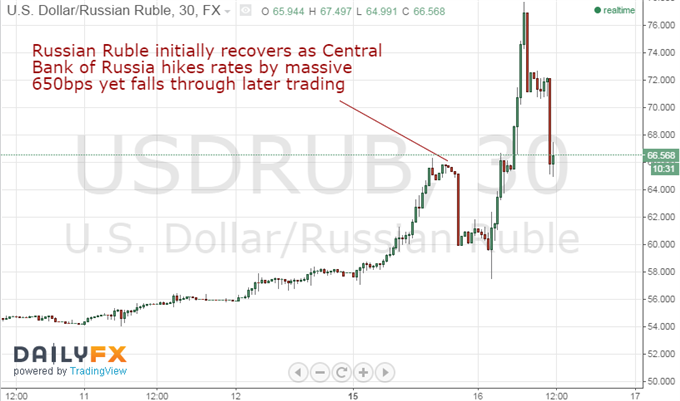 The Russian Ruble continued to plummet versus the US Dollar despite aggressive interest rate hikes by the Central Bank of Russia. Clear fears of a much larger decline as well as the potential capital controls prompted the Economy Minister of Russia to say the government was not considering currency controls. Yet markets seem unconvinced, and interbank liquidity on the USD/RUB and the Russian Ruble as a whole has dropped substantially—raising clear position risks for those holding RUB.

We have recently warned that the Russian Ruble looked at increased risk of continued tumbles and that said volatility could force especially large tumbles in key currencies. And indeed it is worth noting that a broader deleveraging across FX markets led the Japanese Yen sharply higher as the Ruble traded to fresh lows.

The risks of capital controls were a key reason we would avoid trading the Ruble and instead shifted our focus to other Emerging Market currencies—notably the Mexican Peso, South African Rand, and even the oil price-sensitive Norwegian Krone. Thus far the correlation has held fairly well as these currencies tumbled alongside the Ruble.

The promise from the Russian Economy Minister does little to change our view—a drastic decline in RUB liquidity and raise in interbank margin requirements makes it prohibitively expensive to trade. Spread costs have risen substantially, while the risk of being unable to exit a specific USD/RUB position due to illiquidity is very high.

If a trader believes the Russian Ruble will continue lower against the US Dollar, we believe that he or she would be better served trading proxies in other emerging market currencies.

Problem is Not Limited to Russia – It’s Contagion

A collapse in the Ruble and RUB-denominated assets would ostensibly have little direct effect on global financial markets—Russia is significant but has little external debt and its markets are small on the global scale. Yet the risk of contagion remains very clear, and the reactions to the Russian default of 1998 act as a clear warning that further turmoil could put global asset classes at risk.

At time of writing the US S&P 500 traded sharply off of its lows as the USDRUB pulled back noticeably off of peaks. Yet the clear risk is that this crisis is not over. 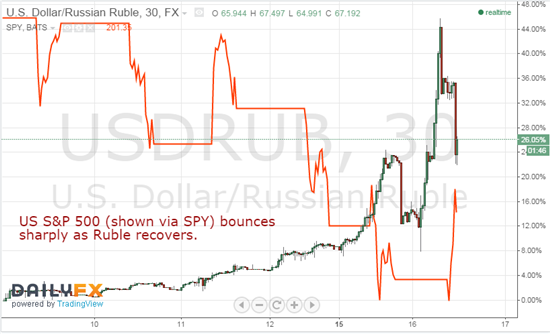 Keep an eye on overall “risk” and the Ruble in particular to gauge risks of broader market contagion.