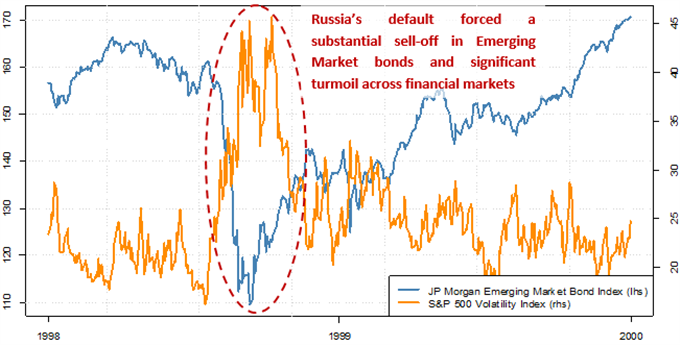 The Russian Ruble continues to plummet alongside Crude Oil prices. Why aren’t markets reacting, and why are there clear risks to G10 economies and currencies?

It was almost exactly one month ago that the Central Bank of Russia (CBR) announced new exchange rate policies in a bid to stabilize its fast-falling currencies, and yet the Ruble has fallen further. At the time we wrote that significant financial market volatility loomed on the horizon. Clearly this has not happened, but further Ruble devaluation could spark the next episode in geopolitical turmoil and ultimately represents a major risk go global financial markets.

A Russian default in 1998 set off a panic across Emerging Markets which quickly spread to developed markets, and a similar occurrence today could arguably have an even more-significant and lasting effect. To see the potential implications we can look at reactions seen through the popular JP Morgan Emerging Market Bond Index (EMBI).

Russia’s debt comprised about 1/20th of the EMBI and yet the index lost a remarkable 30 percent of its value in a single month following the Russian default. Clearly many investors sold any EMBI-linked holdings as they sought to avoid losses on what was at then the largest sovereign default in history. The knock-on effects were likewise significant in broader markets.

The so-called “Fear Index” in the S&P 500 VIX nearly tripled in value from pre-default lows, and Russia’s actions indirectly led to the collapse of LTCM—a major hedge fund which required an unprecedented $3.6 billion bailout orchestrated by the US Federal Reserve.

Ultimately the US Federal Reserve and other global central banks successfully staved off more lasting effects, but we see risks that a similar episode could cause more significant turmoil.

If Russia Defaults today, Effects Could be Far More Significant

Investments in Emerging Market debt have grown substantially since 1998 and systemic risks are considerably higher if Russia were again to default on its debt. The Bank of International Settlements (BIS) highlighted the dangers of an EM-led financial risks in its quarterly study; assets tracked in EM bond funds quadrupled from their pre-Lehman Brothers peak through 2013. 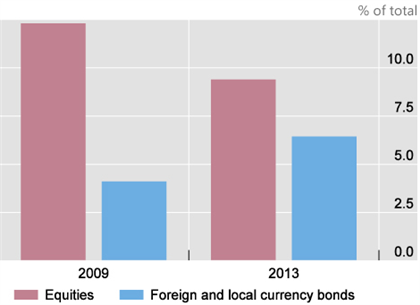 In theory, investors can diversify away or at least mitigate individual sovereign risk by allocating funds across different EM regions and countries. Practical considerations and experience tell a different story, however. Market reactions from 1998 show that Russian turmoil could quickly spread to broader EM markets and had significant effects on developed markets and global assets. The BIS warns that strong concentrations in these “relatively small and illiquid” EM asset markets mean that even small changes in allocations could force significant market volatility.

And indeed, we would argue that risks are magnified given the substantial growth in EM holdings in the years since 1998. Near-zero interest rates in the US, Japan, and other developed economies have forced many investors into more-speculative and higher-yielding investments. Yet fear is a much stronger emotion than greed; the first sign of danger could force a market deleveraging akin to what we saw post-Lehman in 2008 and the Russian crisis of 1998.

Systemic Risks are Clear, but What Should we Watch in Particular?

It seems obvious that Russian and Emerging Market assets would take hit on worsening tensions, but implications are likewise clear for other asset classes. Strong trade links between much of Western Europe and Russia leave the Euro and Euro-denominated assets especially vulnerable; lingering sovereign risks in the Euro area would likewise take center focus once again.

The sharp compression in German Government bond yield spreads to the European periphery highlights a simple point: markets have become complacent. It wasn’t long ago that Greece effectively defaulted on its debt, but aggressive yield chasing leaves the difference between German and Greek 10-year debt yields near pre-crisis levels.

Risk-averse investors would likely flee Greek debt as well as other speculative investments and seek the relative safety of traditional safe havens. Record-high demand for US Treasury debt clouds outlook for the US Dollar somewhat, but the large overhang of USD-funded investments suggests that the Greenback could do especially well in such an environment.

What are the Odds of Further Russian Turmoil?

It is effectively impossible to model or put specific quantitative risks of a geopolitical crisis and uncertainty remains high. Further tumbles in the Ruble and in global crude oil prices would raise the threat considerably.

We will continue to keep an eye on the USD/RUB exchange rate, Crude, and further geopolitical turmoil as clear warning of more drastic measures from the Russian government.