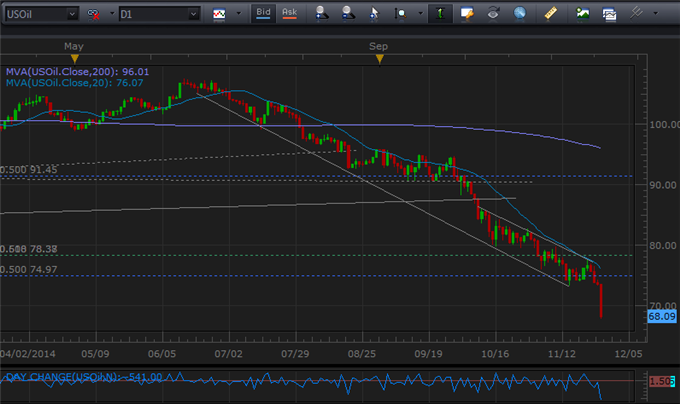 Since hitting its 2015 peak in June, US crude prices had dropped more than 30 percent to below $75 per barrel through this week. That tumble was violently extended today when an OPEC (Organization of the Petroleum Exporting Countries) meeting ended without a reduction in output from the collective which produces approximately a third of the world’s oil supply.

Despite the steady and painful drop in energy prices heading into the meeting, expectations for a production cut were relatively low. According to reports, a few oil producing countries (including Venezuela and Nigeria) were calling for cuts. However, after the five hour meeting, the majority headed by Saudi Arabia would ultimately keep its production target at 30 million barrels per day.

The market reaction was swift. US-based WTI crude oil futures dropped as much as 8 percent from Wednesday’s close taking out $70 and driving the market to a more-than-four-year low in the process. Brent – the European standard for pricing – would suffer a drop of similar magnitude to comparable historical lows just above $70.

The dramatic impact to this particular petroleum product would further carry broad ramifications for the entire ‘energy complex’. Natural gas, gasoline, heating oil and other similar commodities from the refined category would see heavy declines on the day. For the technical traders, this drop opens up a new area for analysis. Extending the nearly six-month bear trend this much significantly bolsters the case for a lasting bear trend. While each $5 mark moving lower stands out as a psychological level, heavy levels like $62, $55 and $50 carry in distinct weight. 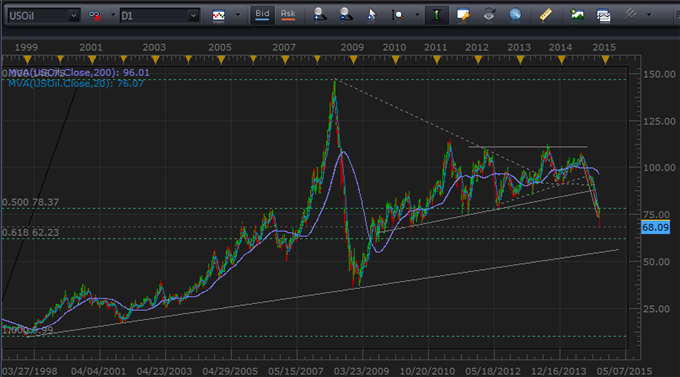 From a fundamental perspective, a drop in oil prices theoretically carries straight forward benefit for those countries that are major consumers while burdens those that are producers. While this will generally be the case, there are many complicating nuances. In the United States where a shale boom has significantly added to the supply glut and reduces the country’s import dependency, the drop in per barrel cost will eventually overwhelm exploration and mining investment costs that have been temporarily offset by hedged with a limited life. In Europe, this drop in energy prices will exacerbate – at least in the short-term – the dis-inflation pressures that the region’s policy officials are already trying to correct. In Russia, the hit to this vital revenue source exacerbates sanctions placed on the country by Western nations over the ongoing standoff over Ukraine. 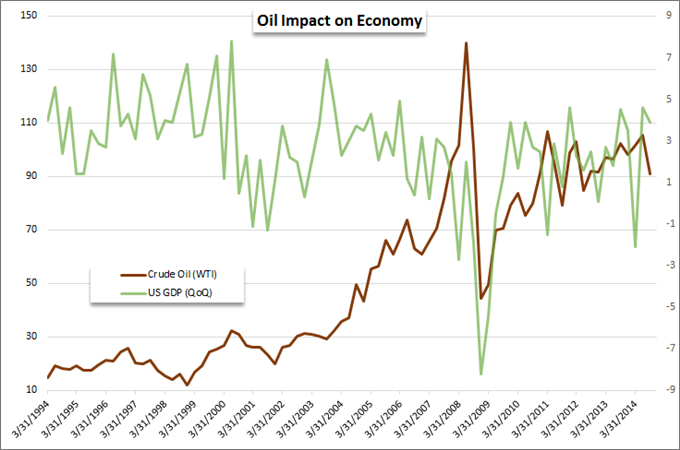 Further beyond the simple supply-and-demand implications, there is also a market sentiment aspect. It would seem that a drop in commodity prices would lead to freeing up investment capital and thereby a swell in financial market appetites. However, as the chart below shows, this is not typically the case. There is a ‘demand’ aspect that is engrained in oil prices as well, and a sustained drop of this magnitude would insinuate economic health is flagging. Moreover, in a world where various asset classes have enjoyed a highly correlated climb over the past five years as investors reach indiscriminately for yield, such a break may bode ill for market strenght – some would say ‘complacency’. 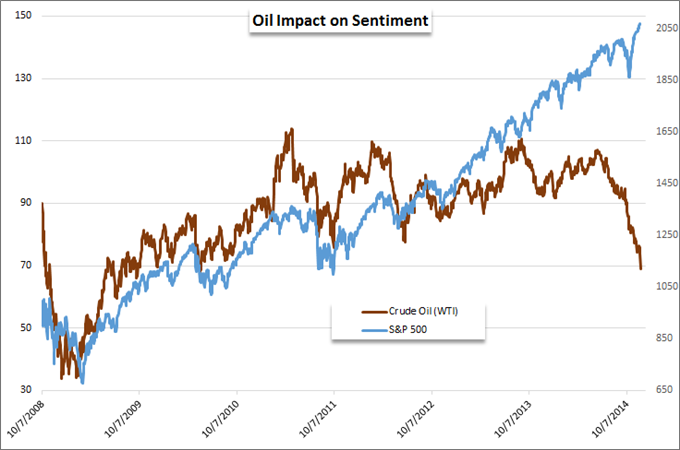 The market implications of this oil change are not isolated to crude charts, nor are they broad fundamental connections. There are plenty of short-term influences to be find in the FX world and likely the capital markets when US liquidity returns for a shortened session tomorrow. Below, the Russian Ruble suffered for the price fall with the currency dropping to a fresh record low against the US Dollar (USDRUB high) on a three-day collapse. 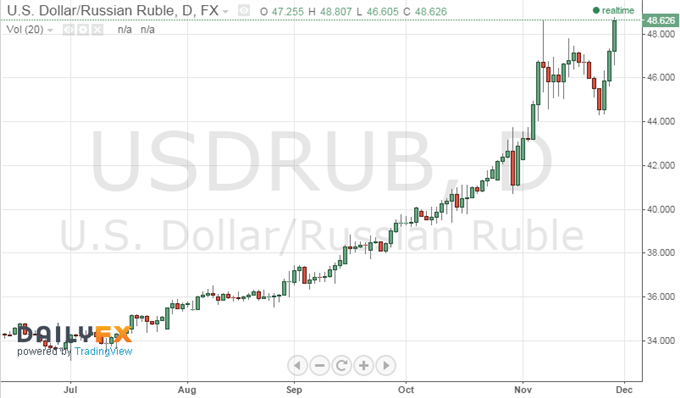 From a more liquid and less risky market (Russian authorities have positioned themselves so that they can intervene more effectively recently to ‘punish speculators’ should it be necessary), the Canadian Dollar would also put in for a sizable move. Below USDCAD surged over 100 pips after the news. Many ‘commodity bloc’ currencies showed the same outcome – including Europe’s concentrated producer, Norway. 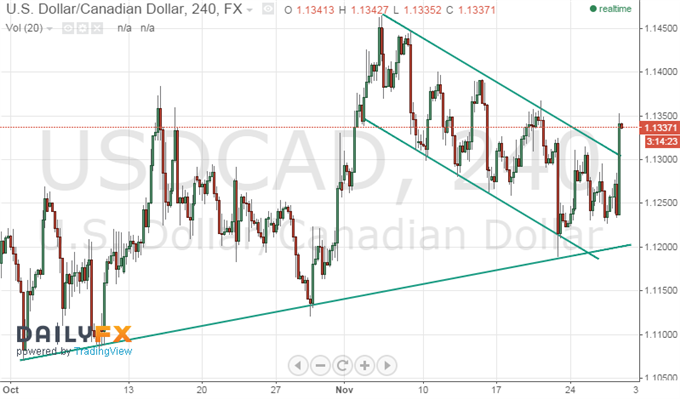 The spark of volatility following this update was certainly dramatic. However, considering the broader trend from crude over the past months and the fundamental imbalances growing behind the supply-and-demand dynamic, expect the energy market to be an important discussion point for the global markets – from Emerging Markets to Developed Markets to energy producers to energy consumers – going forward.