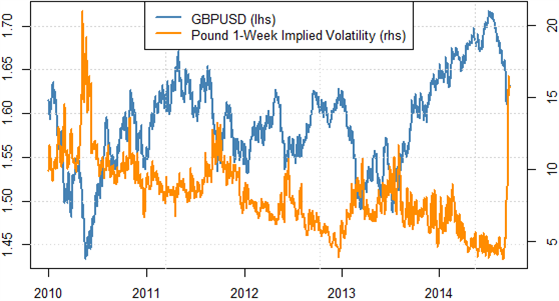 Scotland Vote Promises GBP Volatility - How Big and Which Way?

- FX traders nonetheless remain positioned for the worst – how bad can it get?

- We update probabilities from a quantitative and qualitative basis below

The British Pound has bounced considerably off of recent lows just ahead of the Scottish referendum. But what do derivatives tell us on the odds of the Sterling’s next moves?

Last week we noted that the GBP hit its most oversold territory since the height of the financial crisis as we first priced the risks to the UK currency. In summary, we noted that volatility prices predicted the sharpest GBP/USD swings in over two years, while traders aggressively bet on/hedged against sharp declines.

Since last week the UK currency has actually closed the gap it saw at the open of last week’s trading, and it seems that many FX traders now expect the Union to remain intact through the vote. Yet derivatives tell a different story, and indeed it’s important to note that 1-week volatility prices remain near their highest in over 3 years.

These FX derivatives prices imply that the Sterling/Dollar exchange rate will trade within a plus or minus 3.3 percent range in the coming seven days. This translates into a 330-point gain or loss and roughly $1.5950-1.6600 range based on current spot price. Yet the critical question remains: which direction is more likely?

We stick to derivatives pricing to calculate which way traders are leaning. We can measure the difference in prices paid for aggressive bets on/hedges against GBPUSD strength and weakness. In FX derivatives terms this is known as the “Risk Reversal”. The chart below shows that options traders are their most aggressively positioned for British Pound weakness since the currency traded to lasting lows in May, 2010. 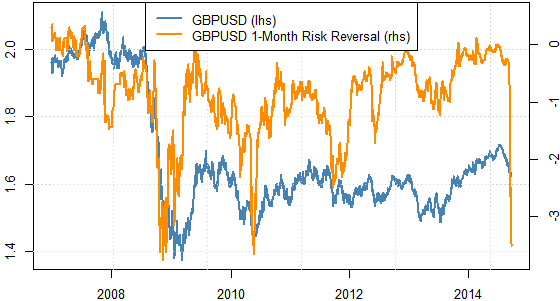 In fact the premium on bearish trades is at its highest since the GBPUSD traded to significant lows in 2010. This occurred as a UK General Election produced the first hung parliament in decades. The almost-simultaneous ‘Flash Crash’ reminded many of the extreme GBP volatility seen just two years before, and derivatives markets seemed in a virtual panic.

With hindsight as 20/20 these fears were obviously overblown, and indeed news always seems the worst at market bottoms. But what are the odds that Scotland will actually exit the United Kingdom?

Will Scotland Vote “Yes” for Independence?

The British Pound tumbled on news that a single opinion poll suggested most would vote “Yes” for Scottish secession from the United Kingdom. Yet since last week we have had no such “Yes” result, and in fact most polls suggest that Scotland will vote to stay in the Union. What are the odds?

According to one prominent FX clearer, recent polls imply a 24 percent probability that Scotland will vote for independence. This prediction is roughly in line with the odds from UK bookmakers, and indeed in last week’s preview we noted similarly low odds of a victory for the “Yes” vote based on key historical studies. Yet derivatives markets remain extremely bearish the British Pound. Why the fuss?

Will the British Pound Crash if Voters Say “Yes”?

It’s unlikely that Scotland votes for independence, but it’s also clear that such a surprise could produce a significant break lower in the GBPUSD. Volatility prices suggest that the Sterling could lose substantially on such an outcome.

Derivatives predict a 68 percent chance that the GBP will remain above $1.5950 in the coming week and a 95 percent chance that it will finish above $1.5600. In the unlikely case which Scotland votes in favor of independence, we could see the Sterling swiftly trade towards fresh 12-month lows. 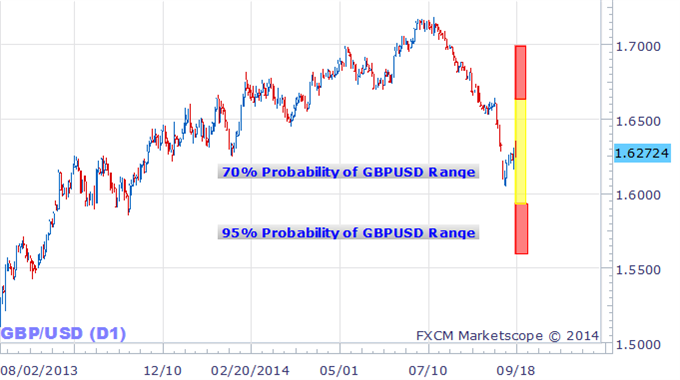 Will the British Pound Post a Lasting Recovery if Scotland Votes “No”?

Odds are that Scotland votes to remain within the United Kingdom, but would that produce a lasting British Pound recovery? Extremely one-sided positions warn that the GBP may bounce significantly if “No” wins it. And yet it’s worth remembering the fact that the recent GBPUSD decline began on a material shift in interest rate expectations—not uncertainty over Scotland.

Thus to see a sustained recovery we might need to wait for a much larger shift in market sentiment. As it stands we like staying long the US currency, and certain factors would need to change to shake us from that trading bias.

Potential short-term topside targets include the top-end of the implied range near $1.6600, which likewise coincides with important price congestion levels.

It’s entirely possible if not likely that the British Pound recovers ground versus the US Dollar on tomorrow’s Scotland vote, but clear uncertainty promises volatility regardless of the outcome. Get up-to-the-minute updates via the DailyFX Real Time News Feed, and sign up for future e-mail updates via this author’s distribution list.