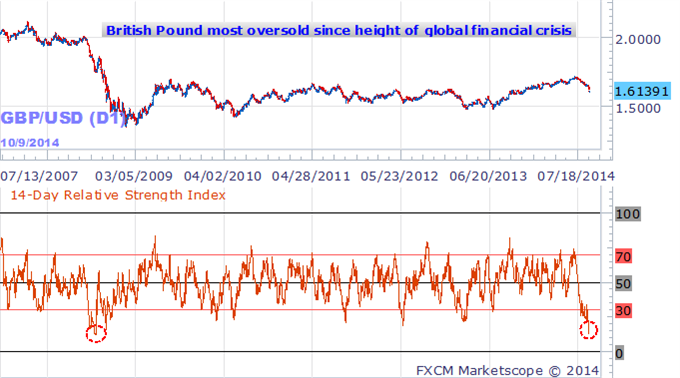 - FX traders positioned for the worst, but how far can the GBPUSD actually go?

- We view odds and qualitatively measure risks below

Traders are aggressively selling the GBP on negative headlines related to the Scottish vote, but what do key market signs tell us on the probabilities for further British Pound depreciation?

British Pound in Most Oversold State since Height of Financial Crisis

If we look at the prices of FX options, we see that 2-week volatility prices on the GBPUSD have surged to their highest levels since May, 2010. Or in other words: traders are betting on/hedging against the biggest Sterling moves in over four years.

Volatility prices surged ahead and after the 2010 UK General Election—in which voter deadlock produced the first hung parliament in nearly 30 years. Add the famous “flash crash”, and traders clearly geared up for substantial British Pound volatility. But how do we translate derivatives prices into actual exchange rate moves?

The Implications of Uncertainty for the British Pound

FX volatility prices imply that the GBPUSD will trade within an approximate 4.2 percent range in the coming eight days, or a 700-pip high-to-low GBP move through the Scottish referendum. Given current spot price of $1.6200, this implies price could drop as low as $1.5850 and/or rally to $1.6550. But which direction is more likely?

To see which way traders are leaning, we look at similar derivatives pricing. We can measure the difference in prices paid for aggressive bets on/hedges against GBPUSD strength and weakness. In FX derivatives terms this is known as the “Risk Reversal”. The chart below shows that options traders are their most aggressively positioned for British Pound weakness since the currency traded to lasting lows in May, 2010.

Traders seem prepared for the worst—much as they were in 2010 when the UK General Election produced the first hung parliament in decades. The almost-simultaneous ‘Flash Crash’ reminded many of the extreme GBP volatility seen just two years before, and derivatives markets seemed in a virtual panic.

With hindsight as 20/20 these fears were obviously overblown, and indeed news always seems the worst at market bottoms. But what are the odds that Scotland will actually exit the United Kingdom?

Will Scotland Vote “Yes” for Independence?

Fast-shifting poll results make it difficult to quantitatively estimate whether Scottish voters say “Yes” to become an independent state. The “No” vote has been leading for quite some time, but news that a single poll put the secession vote in the lead sent the British Pound sharply lower. The lack of true precedent complicates matters further; we can’t look to last year’s results to gauge the outcome of the upcoming vote. 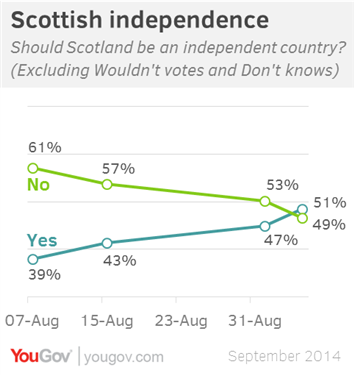 But there have been secession/independence votes in history, and a frame of reference might come from the British Commonwealth itself; the Canadian Province of Quebec held a vote on independence nearly 20 years ago.

We’re careful to make too many direct links to very clearly different circumstances, but it is worth noting that the Quebecois “Yes” vote saw similarly impressive polling momentum heading into the vote. Even a 7-percentage-point lead in the polls was not enough to drive the Quebecois independence vote to victory, however. And academic research showed that such referendum polls “slightly, but systematically, exaggerated the level of support for separation.”

It is one thing to say “Yes” to a meaningless opinion poll, but it is quite another to vote that Scotland secede from the United Kingdom in the actual polling station. What happens to the British Pound if the “No” vote succeeds?

Will the British Pound Post a Lasting Recovery if Scotland Votes “No”?

Extremely one-sided positions warn that the British Pound may bounce significantly if Scotland votes to stay in the United Kingdom. And yet it’s worth remembering the fact that the recent GBPUSD decline began on a material shift in interest rate expectations—not uncertainty over Scotland.

Thus to see a sustained recovery we might need to wait for a much larger shift in market sentiment. As it stands we like staying long the US currency, and certain factors would need to change to shake us from that trading bias.

In terms of British Pound levels, options prices give us a 68% probability that price will stick to a $1.5850- $1.6550 trading range and a 95% probability that we stay within $1.5450-1.6830 window. Either extreme would obviously represent a substantial move, but we view such a one-sided reaction as relatively unlikely.