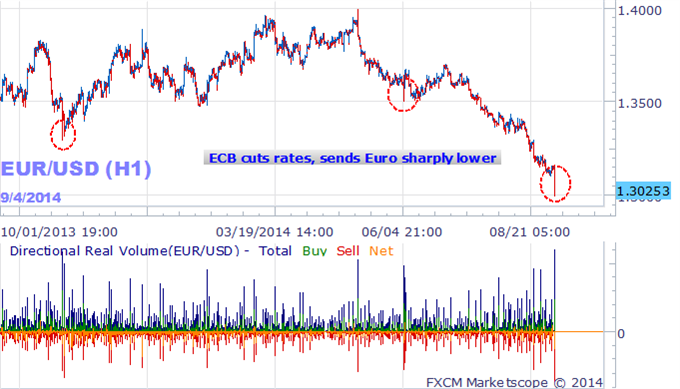 The Euro plunged to fresh yearly lows and tested the critical $1.30 mark versus the US Dollar as the European Central Bank cut interest rates and announced Quantitative Easing policies.

Few analysts and traders expected the ECB would move on interest rates and even less expected that ECB President Mario Draghi would announce the start of a Quantitative Easing program. Thus the Euro fell sharply lower across the board, but questions remain how much lower the Euro may go.

It is absolutely worth noting that the past two ECB rate cuts resulted in a similar EUR plunge only for the single currency to set a noteworthy short-term low immediately following the decision.

And indeed it seems as though the Euro is at real risk of setting a short-term exhaustion low at or near these levels. We recently highlighted critical risks that the single currency could soon stop and reverse higher versus the US Dollar.

The immediate shock value and implications of the announcements are something to be respected. Yet we see that positioning remains extremely stretched; few speculators remain left to sell the Euro at these levels.

We find it difficult to advocate getting long Euro when the trend is so overwhelmingly bearish. But timing is everything in trading, and we think this is not the right time to chase Euro declines. In fact we see substantial risk that the EURUSD may set a fresh exhaustion low and turn higher.

US Dollar to Rise on Fed Minutes, G20 Summit Amid Ukraine War?