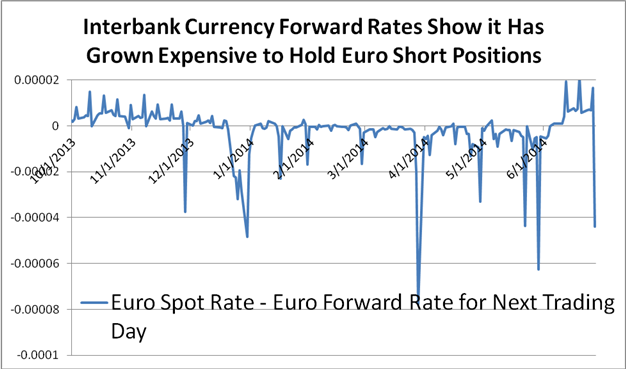 - Forex rollover charges in Euro pairs have surged since yesterday

Why are Rollover Rates so High?

A look at interbank forward markets shows that holding Euro short positions versus the US Dollar and Japanese Yen has become exceedingly expensive since yesterday.

Those forward rates showed that traders could earn interest rate credits in holding EURUSD-short positions just yesterday. Yet a sharp shift now means that being short EURUSD is now at its most expensive since a similar spike in borrowing costs at the end of last month.

Indeed we saw an even more pronounced surgeinto the end of the first quarter, and it seems as though traders may continue to expect similar spikes at month and quarter end. The effect is likewise pronounced in Yen pairs, and the Euro/Yen in particular has seen large jump in overnight borrowing costs. 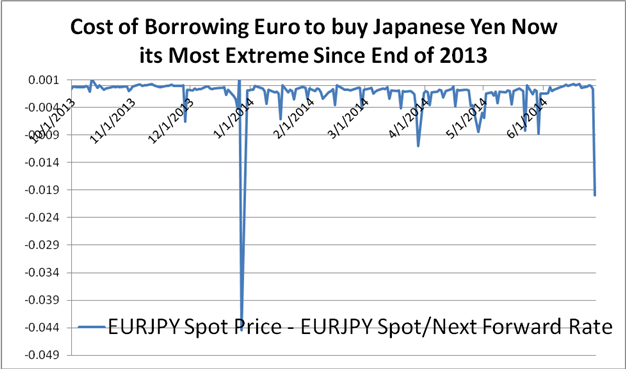 Interbank rates imply that today’s charge on the Euro/Yen in particular is the rough equivalent of the past 25 days worth of interest rate charges. Traders should be wary of holding a EURJPY-short position into today’s New York session close, as this is when rollover charges/credits are debited or credited.

Given that FX market volatility currently trades near record-lows, these charges represent an especially large cost to a trader looking to capture smaller currency moves. Indeed, the sharp changes in interbank lending markets could in some cases make the difference between a winning and losing trade.

This dynamic can be very seamless to the trader, and indeed the parent company of DailyFX in FXCM Inc. posts the Rollover rates for both “Buy” and “Sell” orders directly on their trading platform.