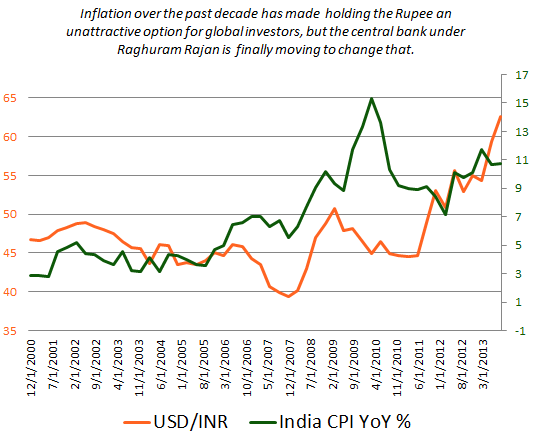 -Emerging market currencies are falling, but the Rupee may outperform

In light of recent emerging market turmoil, we think it is important to note that India has been an outlier. Despite a rapid unwinding of carry trade positioning across those higher yielding EM currencies, the Indian Rupee has managed to hold ground. In addition, the RBI has remained calm throughout recent global stresses.

Just this week we saw unexpected rate hikes out of Turkey and South Africa in an attempt to stabilize their respective currencies. In an eerie development, these unprecedented actions echo the central bank moves out of Asia during the 1997 financial crisis. To no surprise, those rate hikes have not been successful thus far. A 50bps hike in rates by the South African Reserve Bank on Wednesday initially sent the South African Rand higher, yet those gains quickly reversed and the ZAR traded to fresh 5-year lows within minutes of the interest rate move.

The RBI, on the other hand, put forth a modest 25bps increase on Tuesday and market participants viewed this as a healthy step towards achieving 2016 inflation goals. India faces a tough road ahead as with the rest of emerging markets. Yet fundamentals for the Rupee moving forward are improving and leadership at the Reserve Bank of India is strong. We highlight what sets the Indian Rupee apart in several key points:

Higher interest rates should curb inflation, but raising rates likewise comes at a cost to economic growth. Raghuram Rajan of the RBI is stepping up his rhetoric and action, but is aware of the fact that rate increases must be gradual and healthy. On January 21st he recommended that the RBI adopts a 4% inflation target by 2016 in addition to a budget deficit reduction equal to 3% of GDP (from the current 4.8%) by the spring of 2017.

Dr. Rajan’s recommendations are well founded and are likely to be implemented, but the order is tall and there will be costs of such extreme guidance to the Indian economy. Support for the Rupee in 2014 will depend on whether Dr. Rajan continues to turn his rhetoric into action at the RBI; he has already led three rate hikes over the past six months. These developments lead us to believe that the RBI is taking a slow and steady approach in regards to rate hikes in contrast with disrupting moves from other emerging market central banks as of late.

Economic growth prospects for India have been weak over the past five years, but we see evidence that India and the Rupee are relatively well prepared to tackle an emerging market slump in 2014. Dr. Rajan has indicated multiple times in January that he is willing to risk a short term slowdown in growth for more attractive price levels in the future. In other words: he is willing to keep a firm hand on interest rates in order to stabilize inflation and, by extension, the INR exchange rate. 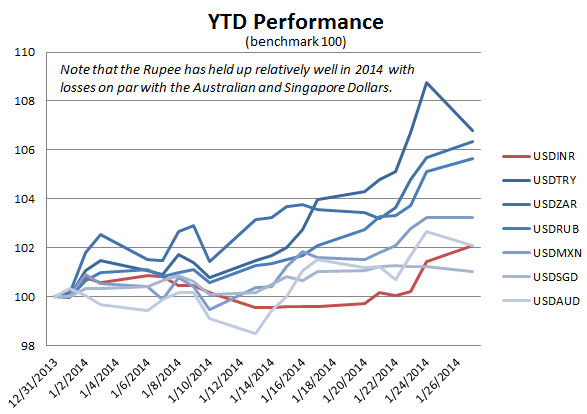 We believe low expectations over the past five years have actually helped the Rupee hold strength amid an EM selloff. India has avoided speculative inflows that sent currencies such as the South African Rand and Mexican Peso to multi-year highs; the same currencies are now suffering adverse impacts as those flows reverse. Looking at price action in emerging market currencies and those impacted by the growth of those nations year to date, we see that the Rupee has performed relatively well with losses against the Dollar on par with those developed economy currencies in the East (SGD, AUD).

The fact that the Rupee has held up well thus far arguably underlines investor confidence in the RBI’s forward guidance. As stated here, a 4% inflation target for 2016 is truly a bold move for the Reserve Bank of India. To be making those calls in the face of slower growth in the East means that the central bank is finally willing to risk lower growth in the short term with goal of achieving healthy price levels in the future. Combined with a new party (Aam Aadmi) boosting morale on the political front, we may very well see the RBI help India achieve her growth potential. If macroeconomic stability comes to India, “the rest will follow” said Dr. Rajan at the January rate decision. Indeed it will.

Also see Special Report: India and the Rupee in 2014