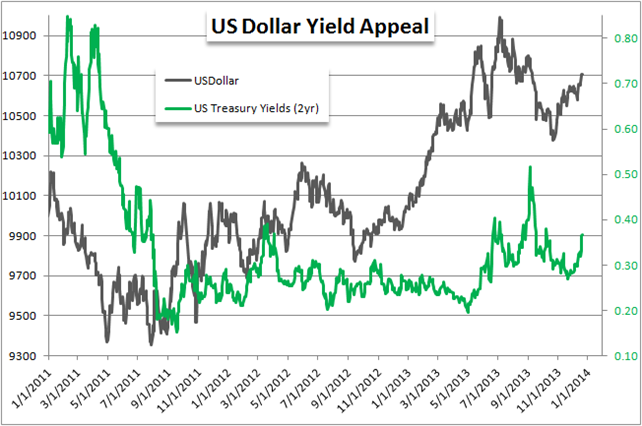 The fundamentals took a significant turn in the US Dollar’s favor at the end of 2014 when the Federal Open Market Committee (FOMC) announced the long-awaited – and to many, feared – Taper. There are a number of important implications to this change in monetary policy. First, if the central bank is comfortable enough to ease is unprecedented support program, it suggests that officials are confident about the outlook for the economy, employment and other critical metrics for the United States.

An outlook for robust and steady growth is particularly important when the dollar is held up against its major counterparts. For th Eurozone, capital inflow looking to take advantage of high yields as a holdover of the crisis has matured. For Japan, growth is seen as being uneven at best and there are concerns of lending bubbles in China. And, the emerging market is considered to be at the mercy of tepid developed world demand and exposed to any unforeseen jolts in global financial markets.

Another important implication of the Fed’s decision to moderate its stimulus program is the subsequent yield impact. A direct aim of the open-ended stimulus program was to lower longer-term lending rates which would encourage economic expansion. Yet, an unappealing side effect of low rates is a lower benchmark return on investments.

In the chart above, we see the Dow Jones FXCM Dollar Index (ticker = USDollar) alongside the US 2-year Treasury yield. Though many will refer to the 10-year note as their primary reference to benchmark return in the United States, this short-term tenor will be particularly important to watch for the performance of the greenback. As the central bank continues to wind down its QE3 program, the natural progression will be towards an eventual rate hike. According to the Committee’s forecasts, that first increase is expected in 2015 (within 2 years). And, if the British pound’s climb through the second half of 2013 is any indication, the FX market moves to price future yield changes well before they are actually realized.

A shift in the Fed’s monetary policy approach and the implications for US market yields is something we would consider a ‘passive’ support. It will offer a steady but tame buoyancy that can be temporarily thrown off course by more dramatic developments. One of those uncertainties, however, can help the dollar. 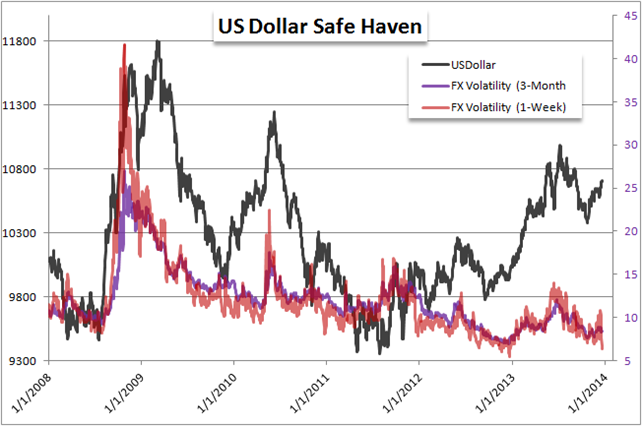 There is considerable debate over whether the US capital markets are building into bubble-like conditions and what role the massive stimulus programs have played in supporting that dangerous swelling. Yet, when we gauge the forecast for growth, earnings, rates of return along with most of the traditional measures of fundamental value; there is a distinct disconnect. In the meantime, investors have had to resort to using record levels of leverage (according to the New York Stock Exchange margin debt levels) and investment in exceptionally risky markets (like junk bond ETFs) in order to make retruns that have any hope of keeping pace with the explosive pace of the S&P 500.

Given the Federal Reserve’s presence in the market, investors were comfortable with taking on this risk under the assumption that threatening market corrections would be quickly curbed by the central bank – leading to what is called ‘moral hazard’. Though with the shift from an ever-accelerating stimulus program to one that is slowly approaching a tightening regime, we will see the cost of that leverage and risky positioning increase. Any sharp increases in perceived risk – measured in volatility – could spur a wider deleveraging effort that sees capital repatriated to a safe haven like the US dollar.

In the chart above, we see that both short and medium-term volatility levels in the FX market are exceptionally low – a similar state for all the major financial markets. As the markets move out from under the Fed’s umbrella of protection, the balance between natural risk and reward will likely find many of the assets on the riskier end of the spectrum (equities, emerging markets, high-yield bonds, carry trade) ease while the US dollar gains. What makes this particularly interesting is that the extreme positioning means there is a risk of a hefty and perhaps panicked rebalancing. The more ‘fear’ there is in a capital market correction, the greater the dollar benefit. And an adjustment to the Taper with the return of liquidity in the New Year is a real threat.

The 2013 Q4 forecast noted that “within the confines of a larger bull market’, a confluence of technical support suggests that the decline is nearing completion or even complete…The decline from the July high would consist of 2 equal waves at 10449. Channel support is at about 10400 and in line with the March and April lows during the first week of October.” The USDOLLAR slipped to 10354 (March low was 10391) during the 3rd week of October before finding bottom. A healthy, nearly 4 month correction may have ‘reset’ the market for the next bull leg. 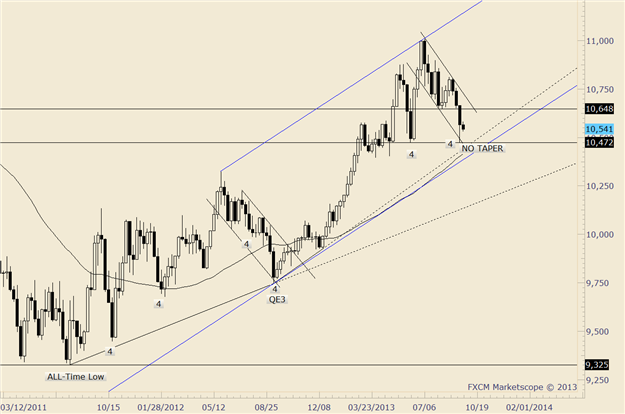 -The decline from the July high ‘counts’ as a complex 7 wave correction. Corrective moves consist of 3 waves. A complex correction consists of multiple 3 wave corrections (in this case, 3 waves + 1 connecting wave + 3 waves = 7 waves).

-At the bottom, 13 week RSI just dipped under 40. On the way up in the first half of 2013, 13 week RSI was consistently above 70 and even reached 80 at the March high. This momentum profile is typical of RSI in bull markets; the indicator consistently registers ‘overbought’ readings but fails to register ‘oversold’ readings on declines.

Strategy: Consider the bull trend firmly intact as long as price is above 10565 (December low).

Trading foreign exchange on margin carries a high level of risk, and may not be suitable for all investors. The high degree of leverage can work against you as well as for you. Before deciding to trade foreign exchange you should carefully consider your investment objectives, level of experience, and risk appetite. The possibility exists that you could sustain a loss of some or all of your initial investment and therefore you should not invest money that you cannot afford to lose. You should be aware of all the risks associated with foreign exchange trading, and seek advice from an independent financial advisor if you have any doubts.