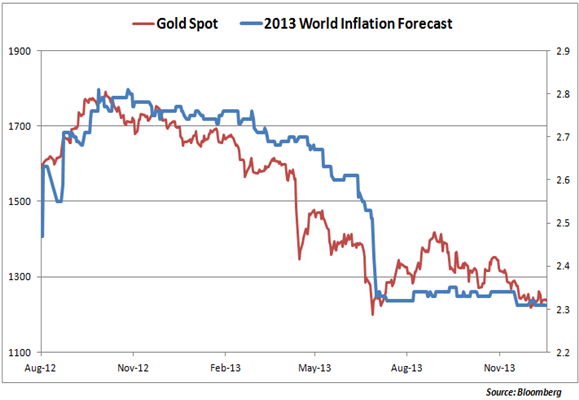 - Gold has posted its first annual decline in 13 years

We’ve argued since the beginning of the year that gold was positioned for weakness as the fundamental drivers of investment demand receded. Gold’s appeal is that of an alternative store of value, sought at times when inflation threatens to debauch paper currency or a major crisis undermines structural confidence in financial markets.

Anchored price growth expectations in the face of aggressive monetary stimulus and ebbing fears of another global market shakeout left gold without fundamental support on either front. Prices responded as expected, dropping over 26 percent so far this year. Looking ahead, a broadly unchanged thematic backdrop argues for more of the same.

On the inflation front, 2013 proved to be the year when investors let go of the notion that global stimulus efforts were doomed to imminently unleash runaway inflation. Indeed, global price growth expectations (as tracked by a Bloomberg survey of economists) persistently declined despite the introduction of “Abenomics” in Japan and the Federal Reserve’s aggressive $85 billion/month asset purchase effort through its “QE3” program.

The outlook for the first quarter of 2014 looks less forgiving still. Most notably, the Fed is preparing to “taper” the size of its stimulus effort. While speculation about the precise timing of the first cutback has produced considerable volatility and looks likely to continue to do so, the overall trajectory of FOMC policy appears to be firmly in place. US economic data has increasingly outperformed relative to market forecasts since the beginning of November. Meanwhile, bond markets have started to price out disinflation, with the 1-year breakeven rate (a measure of the price growth outlook as reflected in Treasury yields) surging in late November to the highest level since mid-April.

Elsewhere, most of the major central banks are in wait-and-see mode. The BOJ is likely to wait to assess the impact of the sales tax increase due in April before contemplating additional stimulus. The BOE is flirting with the enviable problem of having its policy objectives met sooner than expected. The SNB, BOC and the RBA are on hold while the RBNZ is actively aiming to tighten. That leaves just the ECB on the overtly dovish side of the outlook spectrum. Needless to say, this bodes ill for anti-fiat gold demand. 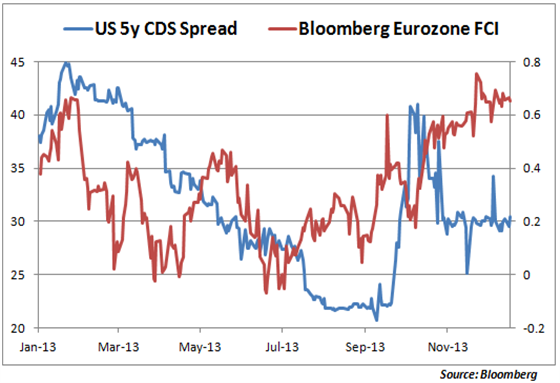 After the Great Recession, the Eurozone debt crisis looked like the likeliest source of structural market instability.That risk has since receded. A Bloomberg gauge tracking financial conditions in the currency bloc now stands at highest level in over six years, pointing to a lack of meaningful funding stress.

Elsewhere, a sharp jump in the 5-year US credit-default swap (CDS) spread reflected jitters surrounding the debate to raise the so-called “debt ceiling” and subsequent government shutdown. As we wrote in our outlook for the fourth quarter however, this didn’t prove lasting. The shutdown turned out to be too much of a political albatross for everyone involved and a deal was struck to end it just two weeks after it began. The 5-year CDS rate turned dutifully lower, dropping over 27 percent from October’s peak. Since then, US lawmakers have secured a two-year budget deal that seems to ensure that another such episode will not transpire in the near term. 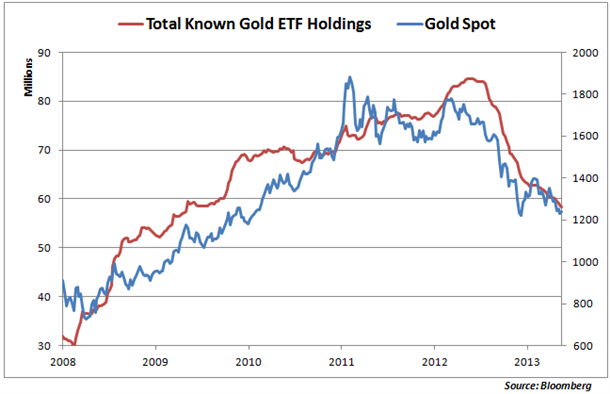 Markets don’t move in straight lines, however. That means that some seesaw price action is almost certainty in the cards, especially as markets adjust to changes in the Fed’s policy mix. Still, as fears of US Dollar dilution dissipate along with the size of the QE program and “tail” risks fade, the desire to hold an alternative-value hedge ought to decline as well. This should keep rallies well-capped and maintain overall structural down trend firmly in place into 2014.

Gold Has Room to Bounce But Larger Trend Points Lower 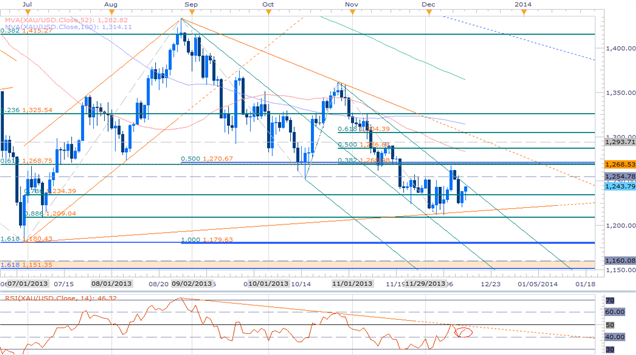 From a technical perspective, gold is set to post its first annual decline in thirteen years and the broader drop following the break below a multi-year triangle formation in April of this year remains in focus. Although the larger trend remains weighted to the downside, near-term metrics suggest the yellow metal is at risk for a correction higher heading into 1Q if prices mount the $1268/70 resistance range. That level represents the confluence of multiple Fibonacci ratios and has served as a clear pivot in price dating back to 2010.

Interim support rests at $1209, with a break below this level targeting more critical support at $1179/80. This level represents the confluence of the 100% Fibonacci extension taken from the decline off the August highs and the yearly low made back in late-June. Note that daily momentum has continued to respect trend line resistance dating back to the August highs. A breach and subsequent break above the 50-threshold would suggest a substantial correction higher may be in the works. It is also important to keep in mind that cyclically speaking, gold tends to perform well into the year-end with the 2014 opening range likely to offer further clarity on whether a rebound is on the cards early next year. Bottom line: gold remains at risk sub-$1268/70, with a break higher shifting our near-term focus to the topside with resistance targets eyed at $1286, $1305 and $1325. Look for a break and close below the yearly low to put the broader down trend back into focus, with such a scenario eyeing subsequent support targets at $1151-1160, $1125 and $1091. 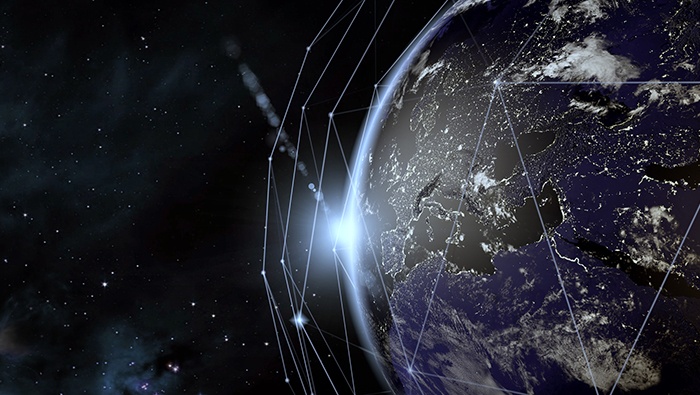