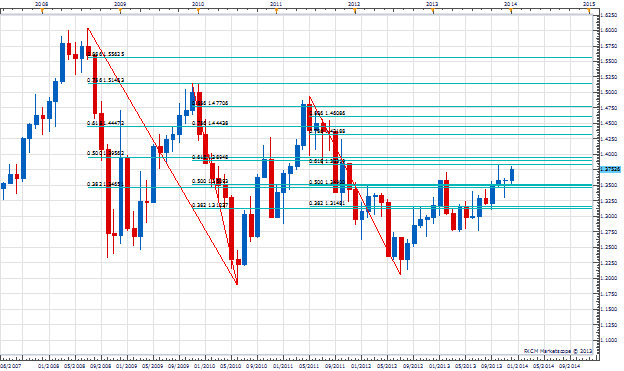 - The Euro finished the year as a top performer

The Euro finished strongly into the end of the year, ringing in as a top-performing G10 currency in Q4 and for all of 2013. Many factors changed that initially had the Euro looking lower in 2013. The primary of which – a deep recession driven by high levels of indebtedness – started to ease. The political circus that characterized much of Europe has closed up shop. The future is looking more promising. What the European Central Bank does (or doesn’t do) next is paramount.

Who Does the ECB Follow - The Fed or the BoE?

The ECB has taken on a wide range of responsibilities with respect to restoring Europe. With governments handicapped by German-led austerity – high taxes and low spending – there is little reason to believe that the seeds of growth are going to come from anywhere else but the ECB.

In November 2013, the ECB cut its main refinancing rate to 0.25%, a new all-time low, as credit growth continued to stagnate, leading to the weakest inflation readings in the post-crisis years. Many market observers correctly pointed to the diminishing ECB balance sheet as a reason. The ECB’s balance sheet has declined by -24.6% in the 52-weeks ending December 6, 2013; to contrast, the Federal Reserve’s balance sheet has grown by +36.8% over this same period; and the Bank of Japan’s has growth by +40.7%.

If loan growth remains weak into the 1Q’14, but another crisis does not come into play, then the ECB might experiment with a Bank of England-style Funding for Lending scheme, targeted at small- and medium-sized enterprises, rather than another expansive LTRO or QE (like the Fed).

Ultimately, if the ECB announces a FLS-like LTRO, it could prove supportive for the Euro. Absent a massive carte blanche liquidity injection like LTRO1 and LTRO2 in December 2011 and February 2012, respectively, measures geared specifically towards faster employment growth, a rebound in the housing market, and a healthier consumer should limit Euro weakness.

The ECB is likely to have a very limited scope for easing in the 1Q’14, giving the Euro ample opportunity to appreciate, particularly against the commodity currencies.

EUR/USD touched its highest level since late 2011 at the beginning of the 4th quarter before encountering strong resistance at the 61.8% retracement of the 2011 to 2012 decline at 1.3830. This level and the 50% retracement of the 2008 to 2010 decline near 1.3950 remain key barriers to further gains with traction above needed to undermine the longer-term multi-year downtrend in place since July of 2008.

Such a move would likely pave the way for a more important move higher in the 1st half of 2014. The early November low at 1.3295 is a key pivot on the downside over the next few months with weakness below required to signal an initial resumption of the long-term downtrend.

However, weakness under the 2013 low at 1.2740 is really needed to trigger a more severe decline in EUR/USD. From a cyclical perspective the first week of the year and mid-March look significant for the exchange rate.