Looking to Sell US Dollar as US Government Shutdown Drags On

- US Dollar falls as Federal Government shuts down

- Shutdown is bearish for the US currency, but real deadline is October 17

The knee-jerk reaction in the Dollar was bearish, and indeed we saw the Dow Jones FXCM Dollar Index fall to fresh lows. But why did it recover, and more importantly—what’s the next move?

The short answer is that that the Federal Government shutdown is bearish for the US Economy and, by extension, the US Dollar.

But what further do we need to know? One of the most significant effects will almost surely be the lack of key economic data releases and the upcoming US Nonfarm Payrolls report.

The fact that the US Nonfarm Payrolls report will not be released is an immediate reason to get bearish the US currency. Why?

No NFP’s? No October “Taper”. A strong NFP print had the potential to lift the Greenback off of its lows as traders bet on the US Federal Reserve taper, but this obviously rules it out.

The longer we go without US Employment figures, the longer the US Federal Reserve will need to go without a critical reading on the health of the US economy. This implies that Quantitative Easing purchases would continue indefinitely under a government shutdown.

More QE would also have a significant effect on interest rates. Bond yields in particular are likely to fall further, and a strong correlation between yields and the US currency would favor further weakness:

Dollar Correlation to US Treasury Yields Trades Near Multi-Year Highs 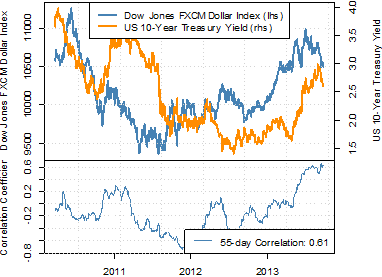 So what’s the trade? We’ll probably want to sell the US Dollar, but the only two factors that matter in trading are Price and Time. Where and when? 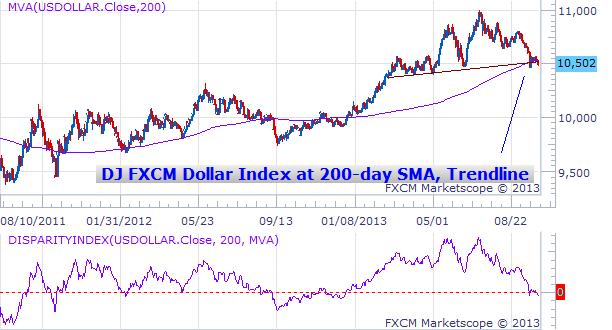 The fact is that it would be difficult to sell the Dollar at current levels, and as such we’re probably best off waiting for an important breakdown before getting short.

The Greenback trades just above critical year-to-date lows against the Euro and British Pound, and indeed some might try and get long EURUSD and GBPUSD on a further break higher. Yet there are two things stopping us:

Professional futures speculators are their most net-long EURUSD in several years, while retail forex traders are extraordinarily short the GBPUSD. Neither seem like attractive ways to play USD weakness.

We then look to the Japanese Yen, as our Senior Technical Strategist points out that the USDJPY is currently in a “Breakout window.” 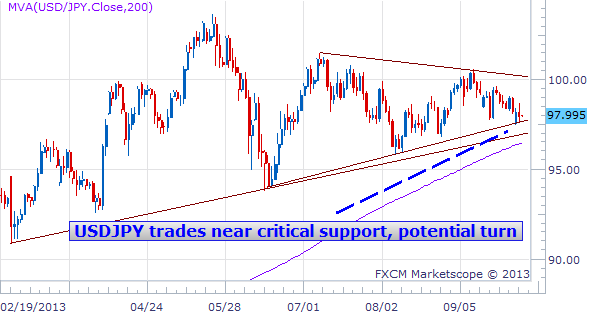 If the shutdown does indeed drag on indefinitely, the Dollar could continue lower and drive the USDJPY below major support. Indeed this seems to be an attractive way to trade the event: wait for the USD breakdown and sell into weakness.

In concrete terms this means seeing the USDJPY close below the late-August low at ¥96.80 and the critical 200-day Simple Moving Average currently at ¥96.50. Such a breakdown would likely target June lows at ¥94 and eventually the psychologically significant ¥90.00 mark.

Will the Dollar Crash? Maybe not. But we can Trade the Slow Grind Lower

The fact remains that the Federal Government Shutdown is not immediately disastrous for the US currency, but continued uncertainty can definitely drive the Greenback to fresh lows. We’ll keep an eye on any potential resolutions—however unlikely—through the foreseeable future.

Most importantly, we’ll keep a close eye on the US Dollar against the Japanese Yen.