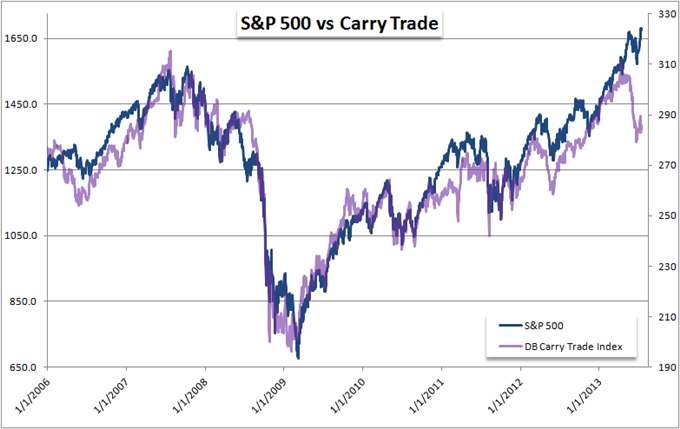 Which is Correct - Carry Trade Reversal or S&P 500 Continuation?

The expectation of return versus the fear of loss is the foundation of every trading decision that is made in the market. This is as natural a cycle of human behavior as can be found. However, like all systems, this one can be distorted. Currently, the Federal Reserve and other global central banks are fully engaged in stimulus efforts that are indirectly targeting the ‘fear’ element of the equation. With a large – and expanding – safety net, traders are encouraged to increase their exposure to risky trades and leverage. Benchmarks like the S&P 500 have reaped the reward. Yet, the support cannot last forever…

Investors’ top concern moving forward is establishing when the support ends. And, as a forward looking market; a shift in optimism won’t occur simply when the first rate hikes and asset sales (Treasuries, government bonds, mortgage-backed debt, shares, etc) begin, but rather when speculators taking advantage of this unique market participant’s presence move to exit ahead of the central banks.

That is the current market concern and the interest in the ‘Taper’. With the S&P 500 driving to fresh record highs, it would seem that there is little to no concern, but what should we make of the chart below?

This is a chart of the S&P 500 (on the left axis) and the Deutsche Bank Carry Trade Harvest Index (right axis). What is the carry trade? It is a trade in the Foreign Exchange market whereby you go long a high-yielding currency and short a low-yielding counterpart – like going long AUDUSD or NZDJPY – in an effort to collect the differential between the two. That daily ‘roll’ is steady income, but traders are still exposed to the rise and fall in the exchange rate itself.

The carry trade is essentially the buy-and-hold trade approach of the FX world. Thereby, it should rise and fall under the same conditions and at the same time as other clear ‘risk’ barometers – like US equity benchmark indexes. As we can see in the chart, the correlation over time is exceptionally strong as would be expected. However, as of late, there has been a strong deviation between the two. That stands to brings us to the all important question: which of these market measures is giving the more accurate gauge of investor sentiment? 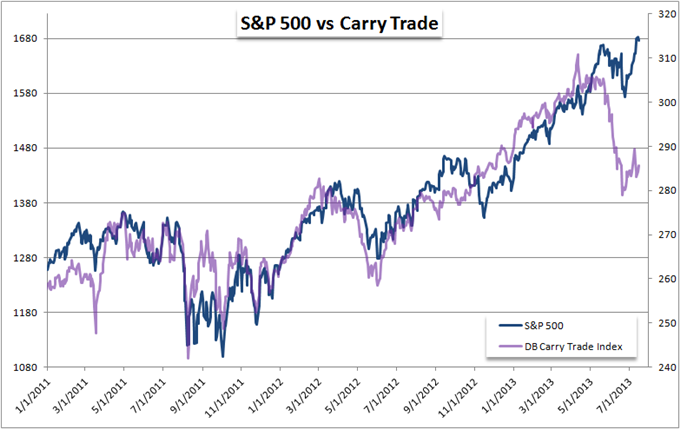 Trends are trends for a reason; and given the pullback from the Carry Trade Index counters the bull trend from the first quarter of 2009, it would suggest that the S&P 500 is the better portend to our future. However, the separation from the carry trade is only one in a list of concerning splits amongst risk-sensitive assets. Global equities are well of their own highs. There has been a record-breaking outflow from high-yield assets. Emerging market funds have dropped through the year and especially hard over the past few months. European debt shows a rise in uncertainty. And, those are the positioning factors, fundamental measures like the traditional global yield potential versus volatility forecast balance has long been off kilter.

Whether we find the S&P 500 proves a growing number of market benchmarks mistaken or US equities – the crown jewel of market sentiment – falters under its own weight falls to the influence of that most basic of market dynamics: investor confidence. Yet, that strong pull of greed or fear hasn’t been felt in some time. Instead, we have witnessed a market numbed to risk on assumption that risk has been taken on central bank balance sheets allowing investors to simply engage in a yield chase. Therefore, the crux for jump starting risk appetite and market trends is stimulus speculation.

There are many major monetary policy bodies (ECB, BoE, BoJ, PBoC) engaged in various levels of stimulus, but the most pervasive and at risk of shifting towards neutral – as long-term investors see it: the step on a path towards eventual tightening – is the Federal Reserve. Taper concerns have already sent Treasury yields surging and asset-backed security funds tumbling for the opportunities. The US central bank warned last month after its rate decision that it could reduce its bond purchases ‘later in 2013’ and fully stop sometime around ‘mid-2014’. That has set the mood. Now, each economic indicator, policy official speech and spike in market volatility is interpreted for influence over changing the pace of Fed support (the rate of growth in the Fed’s balance sheet can be seen compared to the S&P 500 below). 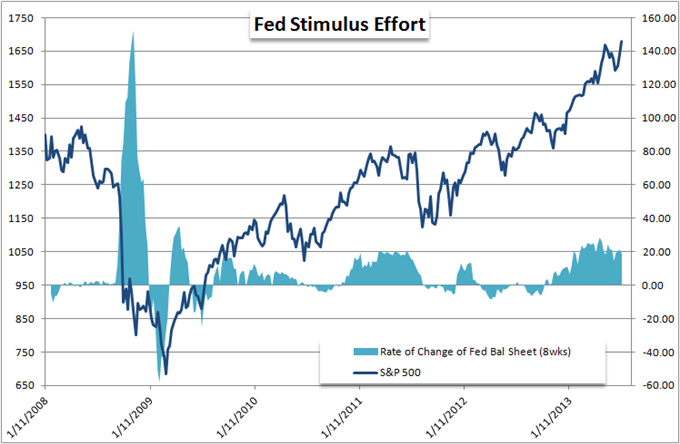 For a specific catalyst, the upcoming semi-annual testimony by Fed Chairman Ben Bernanke to Congress (the House of Representatives Wednesday and Senate Thursday) represents a key potential catalyst. Reflecting how exceptionally sensitive the market is to changes in stimulus expectations, we can see below the sharp rally from the Dow Jones FXCM Dollar Index (ticker = USdollar) after the June policy gathering where the group made its Taper warning known. With the ‘minutes’ that followed a few weeks later, the market responded with an assumption that the headcount on those looking for further labor market improvement would delay stimulus. Bernanke can further clarify one way or the other. 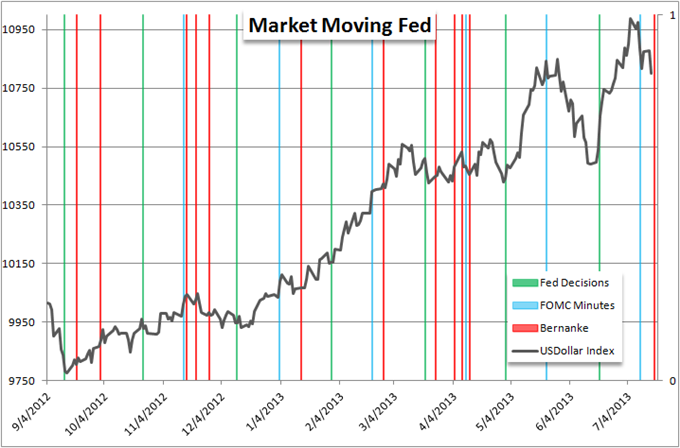 The Trade Opportunities to this Fundamental Resolution

So, what are the trade options should risk trends sustain their climb and shirk fears of stimulus? What opportunities are worth pursuing if risk aversion follows evolves with or without Taper?

Perhaps the most interesting pair is the USDJPY. Thispair will likely drop under the two extreme scenarios. If fear takes over, the dollar will benefit as a safe haven; but carry unwind behind these record low yield differentials will likely benefit the yen far more across the board. That in turn will pull USDJPY lower. Alternatively, if the Taper time frame is pushed back; the recent rally from the dollar on the back of a Fed exit will see the dollar drop against most counterparts – and especially this one. The scenario this pair rises is risk appetite trend is particularly strong and the dollar isn’t hurt for it. 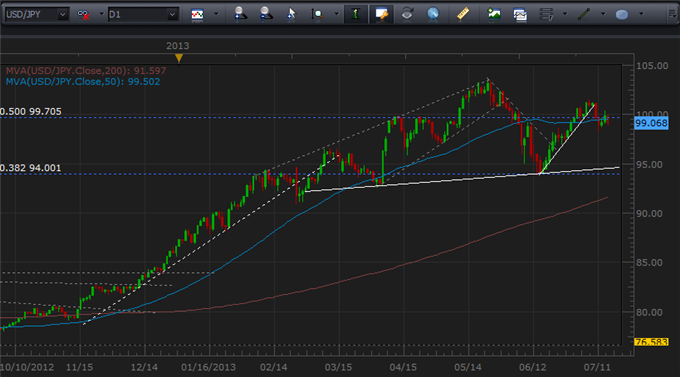 An ‘unadulterated’ dollar setup can be taken under the same pretenses. Trading the USDollar index though may mean this pair struggles a little more to cater to the risk aversion element (which should lift the benchmark) when it is a more moderate pace as there isn’t a yen component to help leverage the move. That said USDJPY is a component of this equally weighted index. 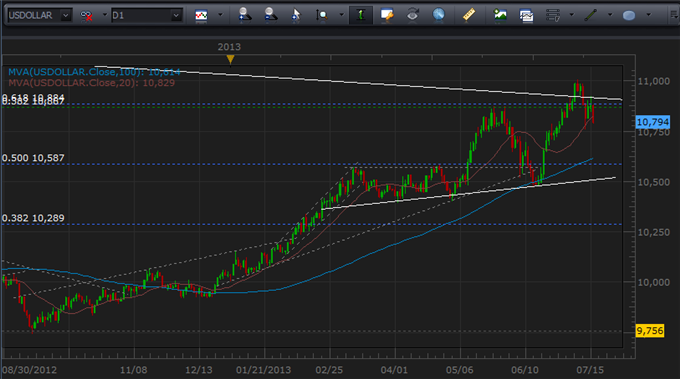 And, for those in the US that cannot trade the Index, the same exposure can be taken with a long or short dollar basket in a platform like Mirror Trader. Using a dollar-based carry basket can further leverage the reaction to changes in stimulus expectations / hopes / fears. 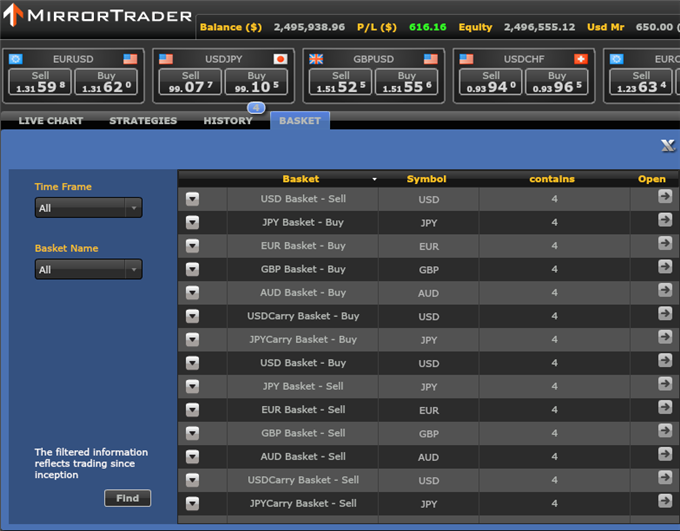